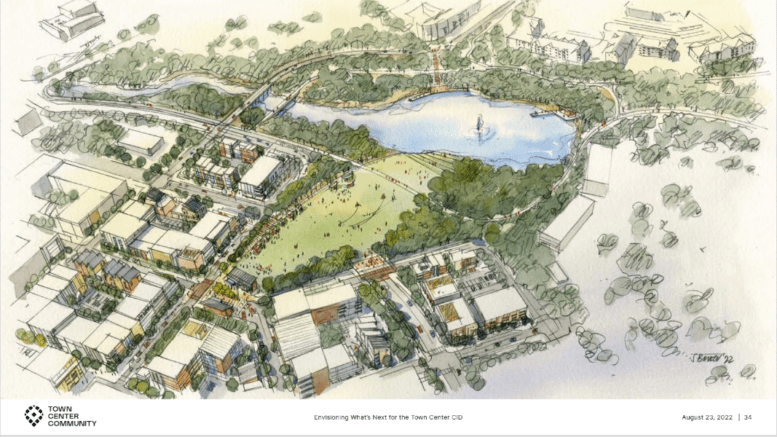 Reaction has been mixed in the Town Center Community Improvement District area since it released a preliminary framework pointing at how Town Center at Cobb mall could navigate its future.

That reaction ranges from enthusiasm to wariness.

The conceptual framework aims to re-envision the mall “as an economic and cultural engine to strengthen the Town Center community and Cobb county,” said a recent news release. It’ s also designed to spark developer interest and eventual investment in the property.

That study kicked off in January, when Town Center Community Improvement District officials asked planning and design firms Kimley and Horn and Perkins and Will to analyze the area, talk to property owners and to sketch out ideas.

“We are at the vey beginning of the predevelopment process and we have had in our master plan concepts for the mall back to 2008 because we knew eventually there would be some sort of timing where it would need an update,” said Tracy Styf, executive director of the district.

She said a major part of the preliminary framework focused on infrastructure, roads, and green space. That includes a concept for a connecting road under I-75.

“We did look at the roadway network in and around the site,” she said, and identified what could be enhanced or modified in a variety of situations.

Styf said that possible futures for the mall were floated, but that one was not given any weight over another. She said that a reimagined Town Center could very well have a housing component, for example. Similar malls across the country have morphed into everything from warehouse distribution centers to live-work-play concepts to medical colleges and churches.

Tullan Avard, the president of the watchdog group Bells Ferry Civic Association says she and others are skeptical.

“It was vague,” said Avard of the document. But she added that “it’s a huge potential to do something for the community It just needs careful planning and most import it needs financial backing,”

Avard says some wariness stems from the case of a neighborhood just north of the mall that was bought out for development. It was originally envisioned as a work-play-live concept on the order of Alpharetta’s Avalon development, said Avard.

“Instead,” she says, “it is apartment city over there,” She wonders whether a repetition could be in the offing.

But Styf says the response has been positive among community members and indicates that planning has been extensive.

She said that feedback has also been favorable on the framework’s vision of more greenspace and greater walkability.

Town Center opened in 1986. It went into foreclosure early last year when mortgage holder Deutsche Bank took possession from the Simon company after attempts to auction the 92-acre development failed.

Scavenger hunts for historic buildings in Acworth and Kennesaw