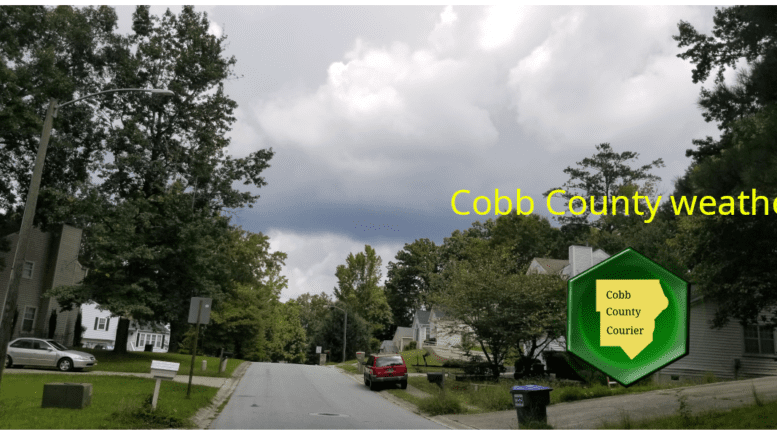 The National Weather Service forecasts a 90 percent chance of rain here in Cobb County on Saturday September 10 with highs in the mid 70s.

What is the Cobb overnight weather forecast for Saturday September 10?

Tonight there will be a 50 percent chance of showers, with a near steady temperature of around 70 degrees.

Mostly cloudy with a chance of showers in the morning, then partly sunny with showers likely in the afternoon. Highs in the lower 80s. Light south winds. Chance of rain 70 percent.

Mostly cloudy with a slight chance of thunderstorms. A chance of showers, mainly in the evening. Lows in the upper 60s. Light southwest winds. Chance of rain 50 percent.

Partly cloudy in the evening, then becoming mostly clear. Lows in the lower 60s.

Sunny. Highs in the lower 80s.

Mostly clear in the evening, then becoming partly cloudy. Lows in the mid 60s.

Mostly sunny. A slight chance of showers in the afternoon. Highs in the lower 80s. Chance of rain 20 percent.

The NWS climate summary for metro Atlanta has now been updated with July figures.

Weather is what you see outside on any particular day. So, for example, it may be 75° degrees and sunny or it could be 20° degrees with heavy snow. That’s the weather.

Climate is the average of that weather. For example, you can expect snow in the Northeast in January or for it to be hot and humid in the Southeast in July. This is climate. The climate record also includes extreme values such as record high temperatures or record amounts of rainfall. If you’ve ever heard your local weather person say “today we hit a record high for this day,” she is talking about climate records.