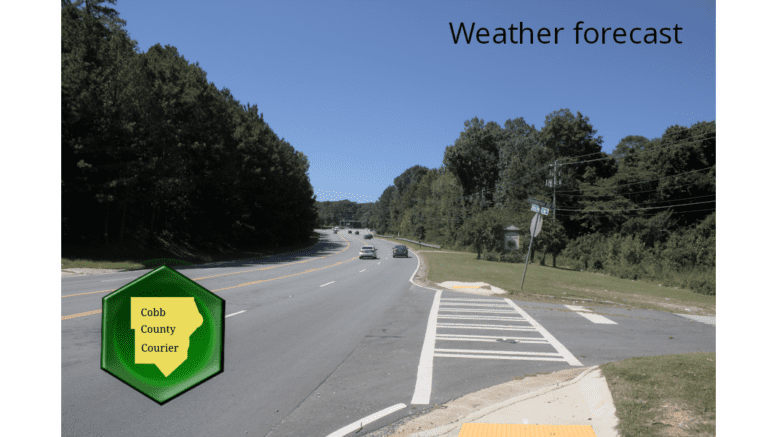 The National Weather Service forecasts sunny skies during the day here in Cobb County on Tuesday, October 25, with a high near 76 degrees.

But showers and thunderstorms are forecast overnight before 1 a.m.

The expected overnight low is around 51.

Showers and thunderstorms, mainly before 1 a.m. Low around 51. Southeast wind 5 to 10 mph becoming west after midnight. Winds could gust as high as 20 mph. Chance of precipitation is 80 percent. New rainfall amounts between a quarter and half of an inch possible.

Mostly clear, with a low around 53.

Partly sunny, with a high near 71.

Mostly cloudy, with a low around 53.

A 20 percent chance of showers. Partly sunny, with a high near 66.

A 30 percent chance of showers. Mostly cloudy, with a low around 53.

A 50 percent chance of showers. Partly sunny, with a high near 65.

A 50 percent chance of showers. Mostly cloudy, with a low around 52.

A 20 percent chance of showers and thunderstorms. Mostly cloudy, with a high near 67.