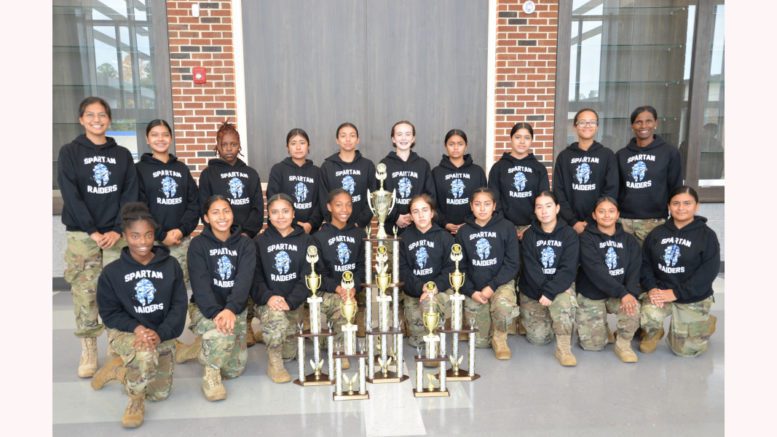 On Oct 29, 2022, Campbell High School JROTC Lady Spartan Raiders captured the Tier 3 Georgia Raider State Championship for the second consecutive year. The competition was held at Spalding High School in Griffin, GA. The Male Raider team secured 3rd place at this year’s competition. The Spartan Raider teams are to be commended for their tremendous resilience, grit, and determination on and off the field.

Team Captain Maritza Medina said, “We really wanted a chance to defend our championship title. After seeing what we are capable of doing as a team, we came back hungry for more and motivated to do our very best. We knew it was going to be challenging because seven seniors graduated from our team, but we had a lot of new talent joining us this season. The key to our success this year was hard work, self-discipline, commitment, and teamwork. Together, we worked hard all year and now we can proudly say that we are back-to-back State Champions!”

Male Team Captain Foster Johnson said “I am very proud of all the hard work and determination that the team showed this year. We showed great improvement and resiliency as we made our second straight appearance at the state competition. Winning 3rd place at State against elite teams in the hardest category is a huge accomplishment and there’s no better group of guys I could have asked to compete with.”

The Lady Spartans Raider team has won the State Championship for two consecutive years under the leadership of Coach SGM Shedina McCabe. SGM McCabe stated “These young cadets make us proud with their perseverance, strength of character, and drive to succeed.”

Coach McCabe and the Spartan Raider teams would like to thank all of the parents, the JROTC leadership, and school administration for their infinite support this season.