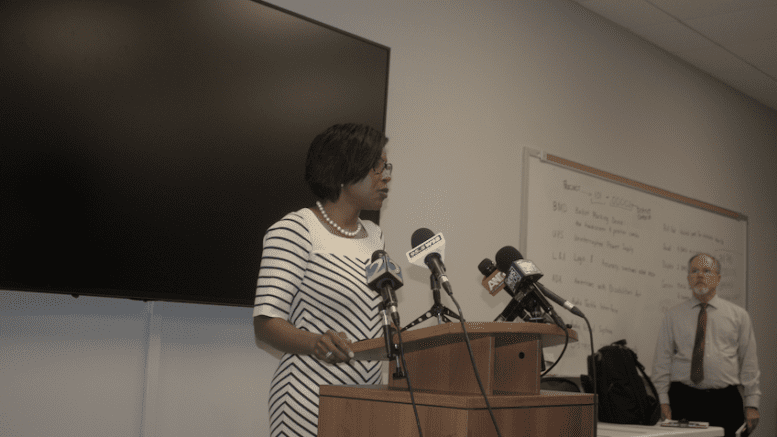 Cobb County Superior Court Judge Kellie Hill signed a consent order this afternoon directing the county to send by overnight delivery absentee ballots to the remaining voters who were not sent ballots due to a clerical error by a staff member.

To view a facsimile of the court order follow this link (with apologies to our visually impaired readers. Court documents in press releases are typically sent as images of PDFs not scannable by OCR software. We’ve included the main points in the text of this article, and are working on a more robust solution to this).

The affected voters will be able to cast ballots as long as they are postmarked by November 8, and received by November 14, the same due date for overseas and military ballots.

At a press conference at Cobb Elections headquarters, Daniel White, the attorney for the Cobb County Board of Elections said that the November 8 deadline for postmark was the best that could be asked for under the law.

White said that the ACLU and the Southern Poverty Law Center had filed suit over the ballots, and that they were involved in arriving at the consent order.

Of the 1,036 affected voters, some had already voted early in person, so Cobb elections estimated there were around 716 who had not received ballots and who had not voted in person. The elections staff worked out a plan to mail the remaining ballots out, and the number of people who have not voted already and were not mailed ballots stood at an estimated 276 voters by yesterday afternoon.

Those voters should have been overnighted ballots yesterday under the court order.

Lisa Cupid, chairwoman of the Cobb County Board of Commissioners said, “I’ll be fairly brief. My role for being here today is to ensure that our voters here in Cobb County have the ability for their votes to be counted.”

“And I’m pleased to know that we are making progress towards that, and as chairwoman of Cobb County. It is not my role to direct the process,” she said. “But I am here to advocate for our citizens and to provide resources to ensure that we are taking steps towards resolving the issues that have been playing themselves out in the past few days.”

“And I have confidence that we will be able to make sure that everyone has the ability to vote and that their vote will be counted,” she said.

Tori Silas, the chairwoman of the Cobb County Board of Elections stated that the unsent ballots were from batches with issue dates on October 13 and 22, and she described the work of staff in sending out ballots over the weekend.

Election Director Janine Eveler said the problem arose when a recently hired staffer failed to perform a final scanning step for the ballots on those dates.

No discipline against the staffer is planned at this time, and Eveler said that with the election ongoing, everyone on current staff was needed.

“We’re so sorry, to these voters. I mean, we were sick about it, as Daniel said, the employee who, who was responsible is sick about it,” Eveler said. “She’s in tears all the time. So we are very upset. This has never happened to us. And we just want to make it right.”

Eveler said she expected the Secretary of State’s office to conduct an investigation after the election.

In response to a question from the Courier, she stated that analysis of what precincts were most affected has not been done, but that is planned for after the election.