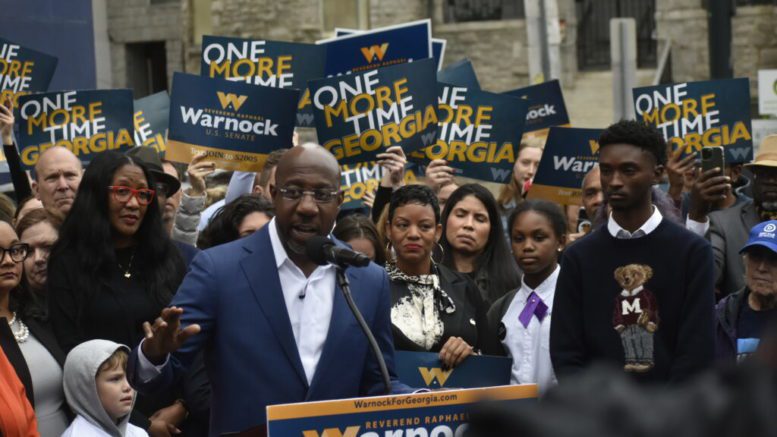 Sen. Raphael Warnock and Herschel Walker were back on the campaign trail Thursday, two days after an election in which neither of them received a majority of votes. The two are set to face off in a Dec. 6 runoff that is likely to be brutal and expensive. Depending on the outcome of close races in Nevada and Arizona, the winner could determine the balance of power in the U.S. Senate.

Warnock greeted a crowd of supporters in Atlanta beneath a mural of the late Congressman John Lewis, who had been a parishioner of Warnock’s at Ebenezer Baptist Church.

“Here’s what this race is about, Georgia, it’s about competence, and it’s about character. It’s about both of those things,” he said. “We need to be clear, this is not simply about passing this law or passing that law, and it’s certainly not about the process of Washington, DC. This is about who we are as Georgians.”

Warnock said Walker does not have the competence or character for the job, referencing a comment Walker made during the pair’s October debate.

In response to a statement Warnock made touting his work to cap insulin costs, Walker said “I believe in reducing insulin, but at the same time, you gotta eat right. Because he may not know, and I know many people that’s on insulin, that unless you are eating right, insulin is doing you no good.”

Warnock’s campaign invited Renee Rayles, a supporter and advocate for people with diabetes to speak at the event.

“Type 1 diabetes is autoimmune, it cannot be changed by diet, exercise or nutrition,” she said. “I am insulin dependent. That means that I need insulin to live. It is the only thing that I can use. If I do not have insulin, for most people with type 1 diabetes who do not have insulin, we can actually die within a week. That’s pretty serious. Meanwhile, Herschel Walker told Georgians with diabetes to simply eat right.”

Warnock said such comments show Walker is not prepared to serve.

“It’s a job that requires knowledge of the issue and a willingness to actually learn more, to understand the struggles of people with diabetes so you don’t say things that are manifestly uninformed, and that as a result of it, inform your lack of ability to get something done for people who are struggling every day. You got to know something, you got to be willing to go and get the knowledge you need in order to represent the people,” he said.

Walker’s campaign has been plagued by a constant drip of unflattering stories, including allegations of domestic violence, lies about past employment and former girlfriends stating that he paid for them to have abortions despite being publicly anti-abortion.

Warnock said Walker has shown “a pattern of violence against women, against his own family, and he refuses to take responsibility for that, and he refuses to even answer questions. So the question right now is this: is that who we want?”

The crowd responded in the negative.

But Warnock offered an olive branch to Walker’s voters.

“For those who gave me their support in this election, thank you. And for those of you who made a different choice, this time, whether for Herschel Walker or someone else, I want to speak directly to you,” he said. “Over the next four weeks, I hope you will give me the opportunity to earn your vote. Every day I’ve served in the Senate, I’ve been thinking about the people of Georgia. And that’s what I will do for the next six years.”

Walker returned to the campaign trail under a large tent packed with supporters in Canton, where he accused Warnock of carrying water for a corrupt political party.

“He’s a hypocrite,” Walker said. “He’s not telling you the truth, and he’s going to continue to be that hypocrite, that wolf in sheep’s clothing, cause he’s not telling you this either: You know, he had voted against our military. He said you can’t serve God and the military at the same time. Do you know we’re the greatest country in the United States, in the world, because we have the United States military, but yet they’re bringing pronouns, they’re bringing pronouns in our military. So his pronoun’s gonna be ‘former/senator.’” Herschel Walker, Nov. 7, 2022. Ross Williams/Georgia Recorder

Walker was joined by Texas Republican Sen. Ted Cruz, who fired up the crowd with a 20-minute speech attacking President Joe Biden, House Speaker Nancy Pelosi, undocumented immigrants and what he called “the Marxists that are trying to destroy this country.”

“On Election Day, we got half the job done and we flipped the House,” Cruz said. “On (Dec.) 6, we’re getting the other half done, and we’re flipping the Senate.”

The next several weeks are likely to see more high-profile out-of-staters come to Georgia to root for Walker or Warnock — Cruz dared Biden and Vice President Kamala Harris to make the trip, judging that their presence would hurt Warnock more than help him.

Former President Donald Trump could play a role in the election as well, whether or not he heads up to Georgia.

Speaking at an pre-Election Day Ohio rally Trump announced that he is “going to be making a very big announcement on Tuesday, Nov. 15, at Mar-a-Lago in Palm Beach Florida,” a statement widely considered to be a prelude to an announcement to a 2024 presidential bid.”

Some conservatives have argued that announcing a bid to return to the White House with the Senate runoff just weeks away would be a bad move. Trump has been blamed for inadvertently helping Warnock and Sen. Jon Ossoff win in 2021 when he spent the time between the 2020 election and the January runoff telling Georgians the state’s election system was not trustworthy instead of stumping for candidates.

Walker, a friend and one-time employee of Trump, was the former president’s pick for Georgia’s senate seat, but netted fewer votes than fellow GOP candidates like Gov. Brian Kemp.

Kemp’s on-again-off-again relationship with Trump may be on again — during the Ohio rally, Trump dropped Kemp’s name in a list of candidates he supports despite previously blaming the governor for his 2020 loss in Georgia.

And Kemp could be coming to Walker’s aid as well, according to a Politico report.

“Under an agreement that was finalized Thursday, Kemp will transfer his door-knocking, data analytics, phone-banking and micro-targeting program to the Senate Leadership Fund, the McConnell-aligned super PAC that is bolstering Walker,” the outlet’s Alex Isenstadt writes. “The super PAC will provide the funding for the $2 million-plus effort, which will be run by Kemp’s senior advisers and staffed by more than 100 field workers.”