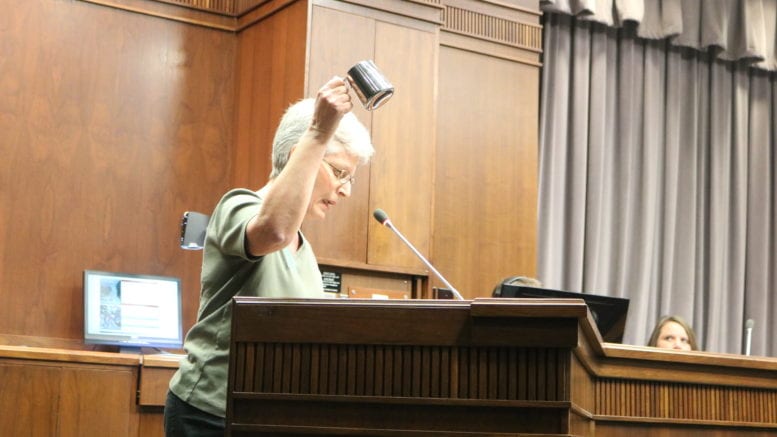 Roberta Cook, of the Cobb Parks Coalition, holds up metal cup before the Cobb County Board of Commissioners -- photo by Larry Felton Johnson

Holding up a metal cup in the traditional symbol of begging, Roberta Cook, a longtime advocate for the preservation of greenspace and the creation of parks, expressed her anger at the Cobb County Board of Commissioners for failure to come up with the entire $40 million voters had approved in a 2008 referendum.  Cook, a member of the Cobb Parks Coalition, said

“We are citizens from every Cobb County district who have united to support the $40 million Cobb County park bond funding.

It has been 9 years since we voted for the $40 million park bond, and we are still waiting for the money.  This month you approved partial funding of the bond, at $24.7 million.  Any feeling of appreciation was quickly overcome by outrage, when I heard the chairman’s legality excuse for the $15 million shortage.  It was explained that the $15 million would require another referendum.  In other words, the voters need to go back vote again.”

She punctuated the words “vote again” hitting the lectern.

“I can’t think of a greater insult to the voters and taxpayers of this county, especially after this board didn’t need any voter support to funnel hundreds of millions of dollars to a baseball stadium.”

There was loud applause from the audience in the room. 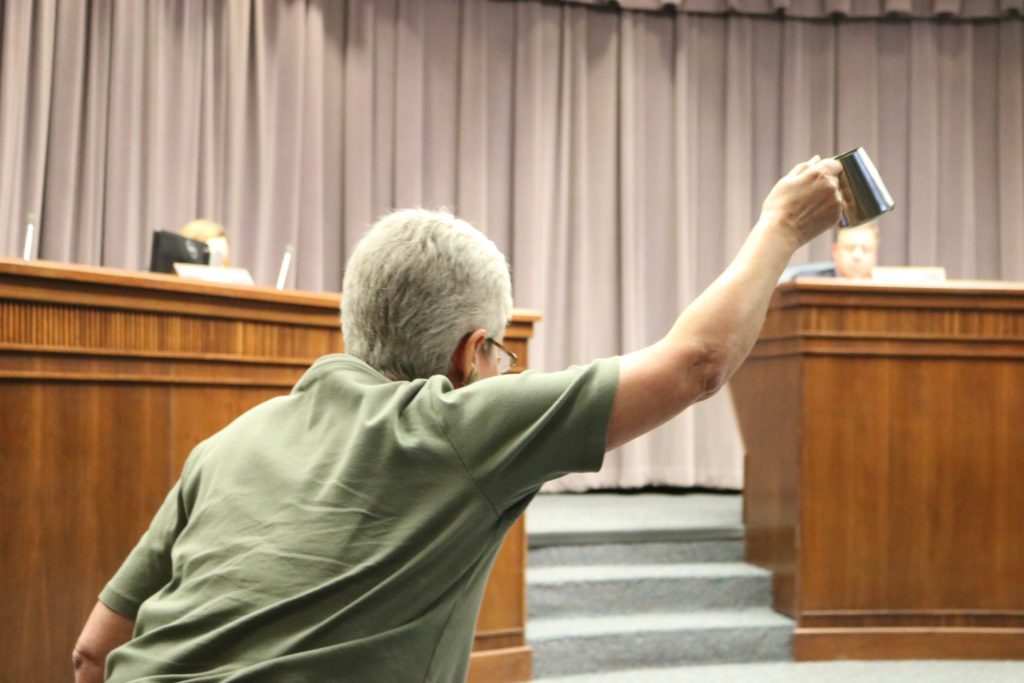 Cynthia Patterson, also of the Cobb Parks Coalition, and a resident of district 2, thanked the BOC for funding the supplemental bond resolution to fund $24.7 million to purchase greenspace and parks for the county. She said “We look forward to the funding the additional $15.3 to fulfill the mandate of 67% of Cobb voters who approved park bond 2008.”

She contrasted Cobb County’s lack of progress in acquiring parks and greenspace with that of Johns Creek, a much smaller area than Cobb County.

“In July, 2016 the Johns Creek city council approved a $40 million bond referendum for park improvements, and to acquire greenspace, as reported in the Atlanta Journal-Constitution.  Sixty-six percent of citizen voters approved the Johns Creek parks bond referendum in November 2016, roughly the same percentage that approved Cobb’s park bond 2008.  Six months later, in mid-January 2017, the city council adopted a resolution to implement the administrative tasks to issue the bond.  Only six months after the referendum was first proposed in July … Compare Johns Creek’s rapid committment to purchasing greenspace, and developing parks, with Cobb’s glacially slow progress.”

Norm Fagge said  in his statement before the BOC,

“For 8 years this board did very little, in fact nothing. By contrast, the board showed great enthusiasm for investing in SunTrust Park, and displayed enormous creativity in discovering ways to skirt the legal obstacles to funding it.  Many believe that the high-handed manner in which the Braves deal was rammed through … is the primary reason why then-chairman Tim Lee was defeated in a landslide by current chairman Mike Boyce.  Indeed, chairman Boyce’s campaign frequently questioned why a $40 million investment in parks required a referendum, but a $400 million expenditure for a Brave project apparently did not.”

In a unanimous vote on Jan. 10, the BOC had voted to issue the bonds allowed by the schedule of the original 2008 referendum.  The bonds had not been issued on the original timeline due to the recession that began in 2008.  The remaining amount left on the schedule is  $24 million, which leaves a $15.3 million shortfall compared to the $40 million voters had approved for parks.

Board of Commissioners zoning meeting this Tuesday, November 16