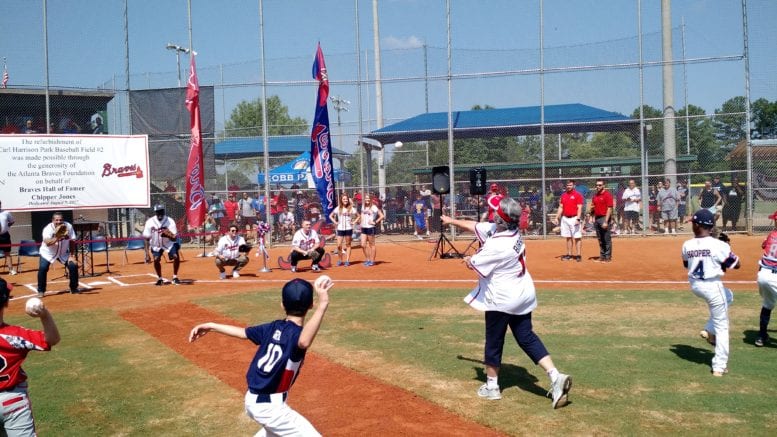 Members of the Atlanta Braves organization joined Cobb County officials and scores of little league baseball players Saturday morning to celebrate the grand opening of a renovated Field No. 2 at Harrison Park. “I’d like to welcome you to Cobb County, home of the Braves, and Harrison Park,” said Birrell during the ceremony. “As you can see by the crowd, Harrison Park is the home of Sandy Plains baseball. This association has a great following of parents, volunteers, and little leaguers, and they know the meaning of giving back.”

It’s the third field in Cobb County the Atlanta Braves Foundation has renovated in the last few years and the fifth overall in metro Atlanta overall. Specific improvements included a new infield, fencing, bullpens, and dugouts, while a permanent sign will hang acknowledging the refurbishment. The first fields to see complete makeovers were located at West Manor Park in Atlanta, Fullers Park in Marietta, Powder Springs Park in Powder Springs and Dacula Park in Gwinnett County. The organization plans renovate five more fields, all of which will be dedicated to Braves legend Chipper Jones, over the next five years.

Along with the the teams gathered on the brand-new field, where creases could still be seen between patches of fresh sod and the chalk lines sat untouched by a single cleat, a large group of parents were on hand watching from behind the fence. Some handed out water bottles or offered batches of cookies to those in attendance, while others snapped photos of their children and the sports heroes on hand.

Plant said during his comments that giving back to the community is an important initiative for the Braves.

“We’re going to be here for a long time, you’re not getting rid of us,” Plant said. “Our core mission is pretty simple: It’s to bring a World Series back to Cobb County, and we’re going to do that very, very soon.”

The Braves’ official drumline and cheerleaders also joined in to help liven up the atmosphere. Following everyone’s comments, Birrell threw out a ceremonial first pitch to Bream and the games officially began at Field No. 2.

Pro-Immigrant Advocates Call for Resignation of Cobb School Board Member