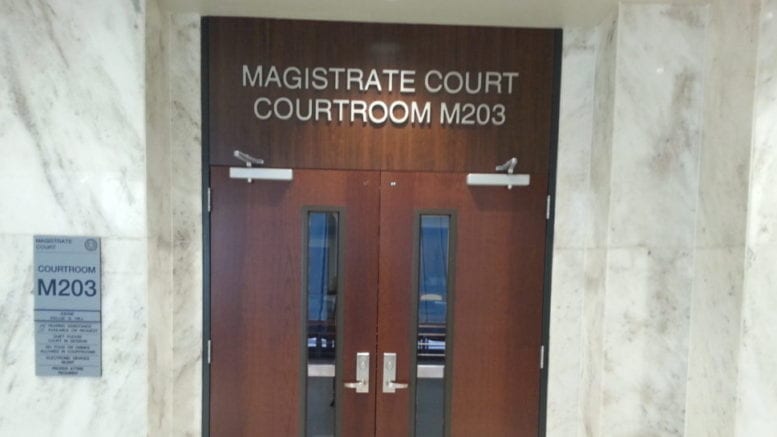 Two alleged members of the Bloods gang were bound over to Cobb County Superior Court for trial on charges of aggravated assault and criminal street gang activity.  Magistrate Court Judge Gerald Moore found probable cause to send Jakhari Cardwell and Antraveious Payne to trial on charges connected with an alleged attempted “slider” theft on December 3, 2018. “Slider” is a type of theft where the victim leaves a car unlocked and the suspect slides into the car to steal either items left in the car or the vehicle itself.

Detective Richard McElwain of the Cobb County Police Department testified that the victim was pumping gas at the QuickTrip on South Cobb Drive in Smyrna when a white Hyundai Genesis began circling the pumps.  The Hyundai pulled alongside the victim’s vehicle, and a passenger from the Hyundai left a rear seat and leaned into the victim’s passenger-side window.  When the victim rounded the vehicle to see what was happening, he saw an individual on his tiptoes looking into the cab of the truck.

The suspect got back into the rear seat of the car as another rear seat passenger pointed what the victim believed to be a MAC-10 pistol in his direction.  Four suspects were in the car and they drove off without taking anything.

The victim called the police, and Officer Smith of the Smyrna Police Department responded to the call.  The case was assigned to Detective McElwain of the Cobb County Police Department for further investigation.

McElwain testified that although no faces were visible in the QuikTrip’s surveillance video the suspects’ clothing, a cardboard tag on the suspects’ car, and a sticker on the window of the car provided means of identifying the suspects.

He stated that a small number of gangs in metro Atlanta commit organized slider crimes, and one of them is a subset of the Bloods, who sometimes post their activities to Instagram.  He visited the Instagram account of one of the members, who had made a video of the suspects driving around on the evening of the alleged crime with clothing similar to that on the surveillance video, and with a similar sticker on the car window.  Another video showed one of the suspects posing with a MAC-10.

Cardwell and Payne were arrested at an Atlanta address without incident.  The Hyundai, which had been reported stolen, was parked across the street.  They were then turned over to the Cobb County police for booking.

Judge Moore bound the suspects over on charges of aggravated assault (for the use of the gun as a threat), and for gang activity. Moore also denied bond.  The two remaining suspects in the alleged crime have not yet been identified.