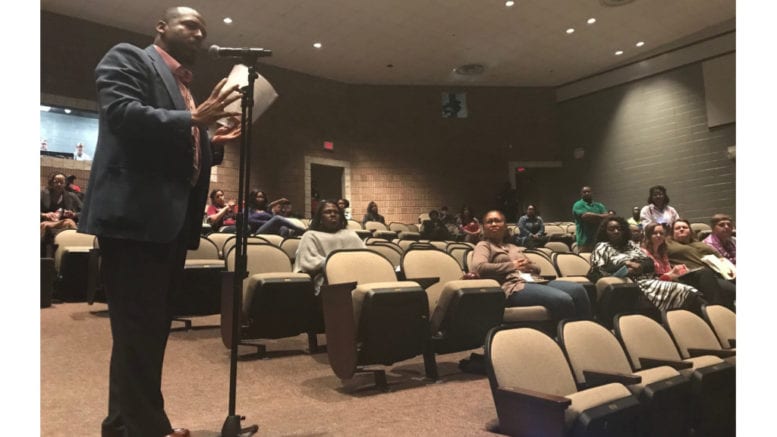 The current plans provide additional parking, a new theater (the old one will remain and is adjacent to the new one), a new gym, additional classrooms in a three-story academic building, a connection between the main building and the new academic building, as well as a new fieldhouse to replace the one that will be displaced by construction. 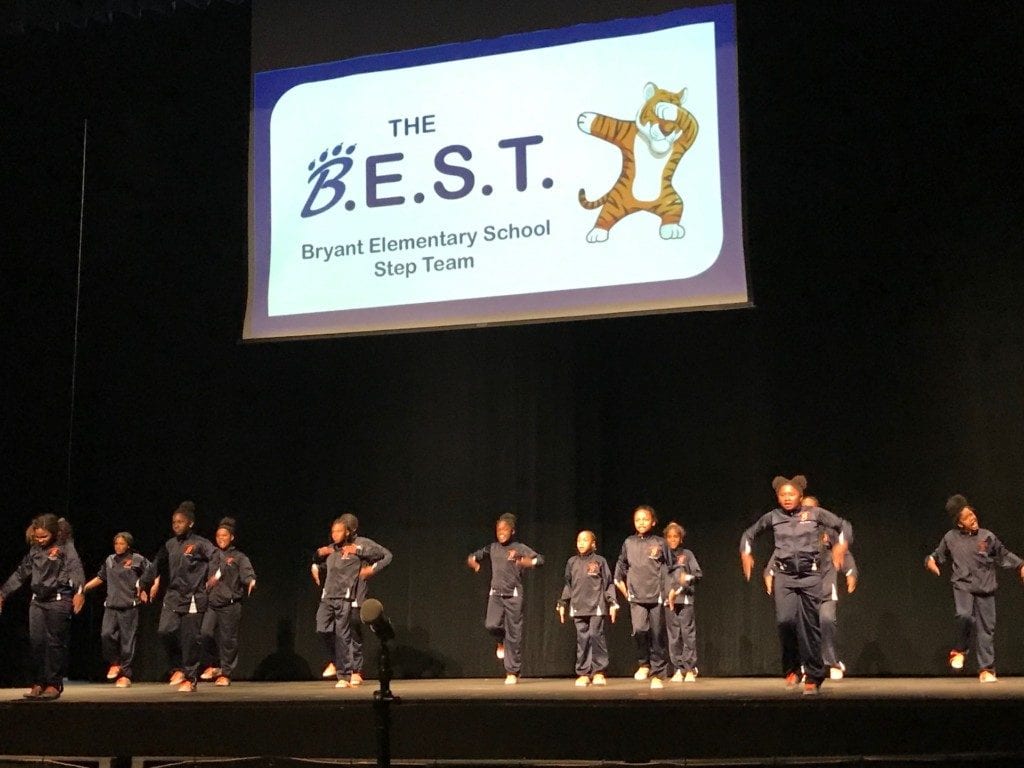 The Bryant Elementary School girls’ step team opened the meeting to a very positive reception in what was an otherwise tense gathering. (photo by Rebecca Gaunt)

Principal Travis Joshua said he expected the plans to be in design phase soon and that construction would begin in March 2020.

Not everyone is confident that the current plans will remediate the current overcrowding situation and many are frustrated by what they see as ongoing neglect of south Cobb by the county.

“Look up here at this plan. Thank God that they are doing this now because they haven’t done anything for Pebblebrook in a long time, which is why a lot of people are not happy,” said parent Gregory George. “With that being said, the SPLOST proposal still does not go far enough.”

George also referenced an enrollment projection study from March 2018. “Our campus will have over 2,800 students by 2024. If the construction’s not done until 2022, the construction is only for just over 2,500 students. Don’t move the trailers. Keep them here. We don’t need to move them because we will be over capacity when we are done.”

Eric Coleman, a Pebblebrook alumnus said, “I’ve been around here just about all my life…graduated in ‘92, so I’ve seen, since then, really no change…I just want to know, honestly, why isn’t Pebblebrook, just to the county, a major concern? What are we on? SPLOST V? We’ve had many SPLOSTS and nothing has still been done.”

The issues at Pebblebrook are similar to concerns being expressed about the Campbell High School SPLOST projects.

Campbell parent Tony Waybright addressed the board at the March 21 meeting to request they not make any decisions until there is a second independent enrollment study, due to conflicting information.

“Projections in 2015, 2016, 2017 and 2018 all pointed to the need for a much larger Campbell High School,” he said. “The presentation of the 2018 study focused on the positive growth all across Cobb County, with more in some areas like Smyrna and South Cobb. That’s on the video and in the report. At the SPLOST town hall meeting on March 6, a stunning reversal of fortune was announced. We were told that enrollment in CCSD was shrinking so fast that growth was down…and Campbell High School, in particular, was not going to grow above 3,000, almost our current enrollment. We were asked to believe a report that completely contradicted everything we see with our eyes and in our neighborhoods in Smyrna.”

Asked to comment for this article, a Cobb County School District spokesperson said in an email, “The Cobb County School District is home to 114 schools with over $2 billion dollars in current needs. While the District wishes it could provide for every need, we do the best we can with the resources we have. Our commitment to South Cobb and Smyrna in particular is significant and can be seen with approximately $250 million dollars in ED-SPLOST V dollars which will provide new school buildings and improvements to existing schools.”