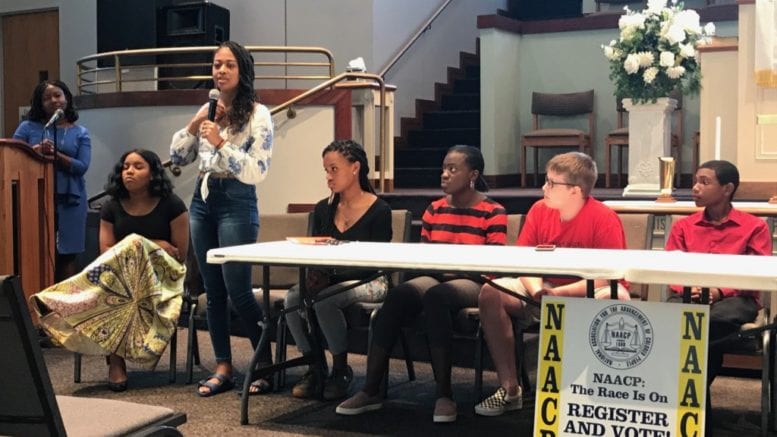 A panel of Cobb students shared their struggles with mental health, drugs and inequity in school to an audience of parents, teachers and superintendents at the Cobb NAACP Annual Education Forum Tuesday.

The student panel consisted of 10 students from the Cobb County School District and Marietta City Schools, ranging from fifth grade to high school seniors. Participants were asked by moderator Alisha Thomas Cromartie, a former state representative, to talk about what they believed was and wasn’t working in the school system and to give honest feedback in a “safe space.”

According to the students, drug use to cope with anxiety and stress is prevalent. The students emphasized that it’s occurring heavily among students in advanced academic tracks, like International Baccalaureate, AP and honors courses.

“A lot of my friends have real drug addictions…and I think it’s because in these classes there’s so much pressure,” a student said.

Vaping has come under public scrutiny with complaints of it being common in school bathrooms and classrooms. Panelists referenced the popularity of “juuling” at school, which according to the National Center for Health Research, has a far higher concentration of nicotine than other e-cigarettes, with “one juul pod being equivalent to a pack of cigarettes.” The juul’s popularity with young people has been attributed to the fact that it’s small, resembles a USB and can be charged in a laptop.

Bullying and peer acceptance is another stressor. A panelist said “slap-boxing” (similar to boxing, but with open hands) is a common occurrence in middle school bathrooms and is used to gain acceptance. Another said a friend became suicidal due to bullying, while others spoke of taunts relating to skin color and accents. The zero tolerance policy has caused some to feel concerned that they can’t defend themselves or ask adults for help.

The palpable divide between students in the general education and advanced tracks is causing a lack of unity, causing some to compare it to having two separate student bodies. Similarly, some said they felt the division between east and south Cobb, saying that more resources are going to schools in the east.

Madison Arnold, a junior at Campbell High School, said she’s been experiencing that split since elementary school, when she and her mom started a campaign to rebuild Harmony-Leland.

“The parents and students and everyone at Harmony-Leland gave the most effort and the most time to get our school rebuilt and it wasn’t even put on the SPLOST for people for a long time,” she said.

Despite concerns, several of the students indicated they felt they were getting a good education through rigorous courses and STEM activities. Band, chorus and extracurricular clubs were mentioned as providing enriching opportunities.

Rivera shared some of the resources offered by Marietta, but acknowledged the students who felt their needs were not being met and said that there was work to be done. Additionally, he explained that Marietta has an African American Advisory Council which requested and was granted access to the district’s discipline data to proactively deal with patterns and issues.

“My expectation in Marietta is that we are looking at every single discipline infraction to figure out where we can do better, where did we underreact and where did we overreact?” Rivera said.

In response to the drug use, he told the audience he serves on the board of the Davis Direction Foundation, a local organization fighting opioid and heroin addiction.

“A lot of children connect with drugs when they don’t have a connection elsewhere,” he said. “One child struggling with drugs is a problem for all of us…I don’t think we can have a veil over our faces.”

Ragsdale told the panel that they can set the example for their friends who do drugs as role models who say no. He also responded to the concerns over the differences in different academic tracks.

“Our target is for everyone, regardless of what school you go to, regardless if it’s magnet, regardless if you’re in AP, honors, or on-level, is to make sure your student success is our number one goal. We truly live that,” Ragsdale said.

Campbell High School junior Kaitlin Ducksworth said she appreciated Rivera’s transparency on the drug issue, while Madison Arnold said she wished Ragsdale would have said more of the things Rivera did.

“I like that he [Rivera] acknowledged that he knew about those issues, but he doesn’t know everything about it. And so he’s still in the learning process of ways to solve those issues,” Ducksworth said.

Tiah Carthers, an eighth grader at Marietta Middle School, was happy about Rivera’s statement that he would begin working on the issues raised the next day.