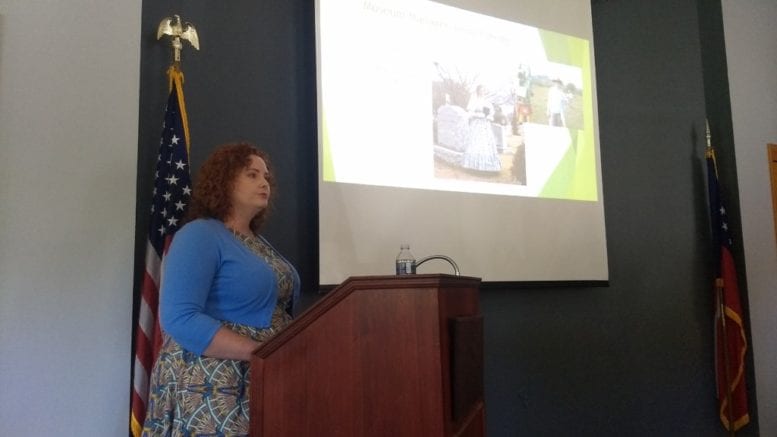 Everything changes over time, including museums dedicated to preserving history. The first Smyrna history museum opened in 1939, and 80 years later the newest iteration will celebrate a grand opening this fall.

“This area has a rich history starting thousands of years before the city’s incorporation in 1872,” said Jennie Eldredge, Smyrna Museum Manager. “The museum’s artifacts and documents are vital links to Smyrna’s past, but it is people in the community today who will truly make the Smyrna History Museum an integral part of the City of Smyrna.”

The museum sits on Atlanta Road inside a replica of the former Smyrna railroad depot, which was located nearby from 1869 to 1959. After being managed for years by former Smyrna mayor Harold Smith, the city closed down the museum more than a year ago for extensive renovations.

Eldredge, who holds both bachelor’s and master’s degrees from Georgia State University, spoke about the renovation process on Sunday afternoon at the Smyrna Library.

“I definitely qualify as a history nerd,” said Eldredge, who has previously worked with the Atlanta History Center and at Oakland Cemetery.

While Eldredge is a city employee, she’s working with a host of volunteers, including Smith and the Smyrna Historical Society, which is helping assist with gathering items for the reworked museum space.

“Smyrna history is pretty important to me personally, I’ve always loved it,” said Mike Terry, a fifth-generation Smyrna resident who heads up the historical society. “When the city decided they wanted a new historical society they picked and chose about a half dozen people to form it and I was one of them. I was lucky enough to be invited and I’ve been involved from the beginning.”

Smyrna is also working with a firm called Brockington & Associates to make sure the museum is done as well as possible. The new version should open late this fall.

The museum space encompasses just 1,500 square feet, plus another 1,500 in the basement which will be renovated later, so a big focus will be on maximizing the use of vertical space. Admission to the new museum will be free, and it will also feature a space for children to play and interact. Eldredge envisions school children trekking to the space, which will allow kids to create their own postcards and Cherokee-style weaving baskets.

Visitors will go through the museum learning Smyrna’s history in chronological order. There will be five highlighted time periods labeled genesis, battleground, cityhood, jonquil and, finally, rebirth, which will include the renovation of downtown.

“Smyrna really was a pioneer in the United States in terms of planned development of its downtown,” said Eldredge.

Right now the museum’s artifacts are scattered across its basement, in Smyrna Fire Station 4 and in a climate-controlled storage unit off site. Eldredge helped break down the old museum herself before packing them away.

Artifacts range from serious to silly to sanguine. A marker used to set the original center of Smyrna in 1872 will be on display, as will yearbook photos from Smyrna native Julia Roberts. Terry recently came across a 1930s menu from the old Guernsey Jug restaurant donated by a resident in her 90s, plus a quilt from the former Fitzhugh Lee School.

“Museum collections are never really a static thing,” Eldredge said. “They grow and shrink as people donate objects, or as the focus on the collection changes.”

“The hard part with museum exhibits is paring everything down into text,” said Eldredge. “Studies have shown that people really only pay attention to about 100 words at a time.”

New items are being collected all the time. The Smyrna Historical Society has accepted donations in recent months at the city’s library, though it sometimes has to turn down items as there’s only so much space available.

Luckily, some of the best artifacts don’t take up any space. Local historian Bill Marchione has interviewed roughly a dozen locals, and in the future citizens will be able to view the recordings at the library.

Eldredge said the new library will target three main groups: school children, local residents and visitors. A temporary space will rotate exhibits every six months. Improvements to the inside of the museum include LED lights, new paint and UV screens on the windows to protect the artifacts.

The museum still won’t be completely finished even after it reopens. Long-term plans call for a gift shop at the Aunt Fanny’s Cabin nearby and future exhibits in the basement, but that comes with the territory of museum work.

“The work is never done,” said Eldredge. “Even once we get the museum open for everyone, there is always more.

“Remember When Club” returns to the Marietta History Center