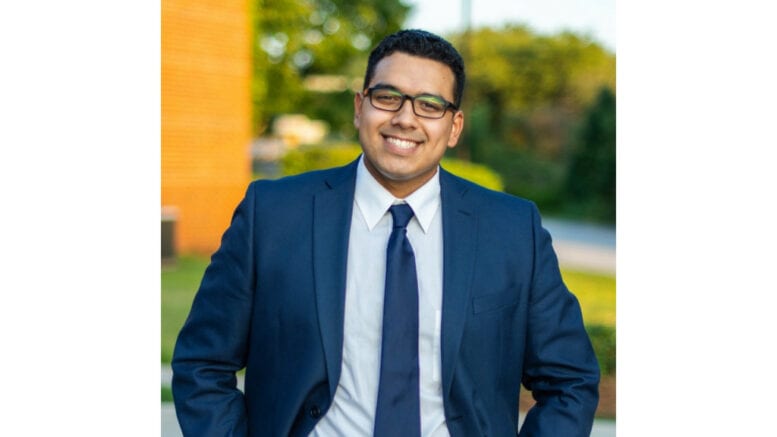 Edwin Mendez is running for the Cobb County Board of Commissioners from District 4, the seat current Commissioner Lisa Cupid is vacating to run for BOC chair.

In a conversation with the Courier, Mendez said, “I come from an immigrant household.”

“My parents came from Mexico,” he said. “And me growing up here, I’ve never seen a lot of people that reflect my background. I want to see people come out. I want to run for office, I want to motivate other people who have never been heard, for people have been neglected to come on and do the same, so they can know that they have a voice and that if we are able to speak for everyone that our community will be much better place and more united.”

“I’ve always been here in the community,” he said. “I grew up in Cobb County. So one of the biggest reasons why I want to run for county commissioner is because I really want to see a change, not just a change in the county, but a change in District Four.”

“When I graduated from Pebblebrook I went to Georgia State University. I just recently graduated and got my degree in political science. After my first year of undergrad, I joined the Georgia National Guard.”

He said his service with the National Guard will end in February.

Mendez said that his first goal is economic justice. He said he realizes that county commissioners don’t have the power to create a minimum wage, but that he would make sure county employees made a living wage by setting a minimum wage for people working for the county.

His second goal is economic development and making sure the community has a voice in that development.

“One issue that the county schools have is getting information from people who are being evicted from their homes,” said Mendez.

He said he would propose an ordinance that would set up a program to let the schools know when the family of a student has been evicted.

“Why? Because first off it’s going to let the school know who needs help,” he said.

“Second, because if we have any organizations that help people who are dealing with issues, like being evicted, (those organizations) will be able to … come in and help,” said Mendez.

“So that is one thing that I actually want to do. I want to figure out a way so we can stop a cycle of poverty.” he said.

The Courier asked Mendez if he had an approach to land use and zoning decisions, since so much of the BOC’s time and attention is devoted to zoning.

Mendez said his approach to zoning is to give the community a voice in the decisions. He gave as an example the Magnolia Crossing apartments, which were torn down leaving a large vacant lot.

Asked about the role of the South Cobb Development Authority, which has responsibility for the Magnolia Crossing property, he said, “I do think it needs to act. It needs to act, and be bold, and make sure there is equity in our district. Because when we look at all of Cobb, South Cobb is lacking that equity.”

“But it’s also about human rights and being able to get rid of any discrimination. One thing I want to do is create a Commission of Human Rights. So this is something that’s happened in other other counties across the country,” said Mendez.

“That is basically oversight of how the county is running, how are agencies running, is there any discrimination? Why? Because we need to figure out how to fix this root issue in the county. Because if we don’t, then these people are going to continue to be neglected. And that’s why we need to be able to speak for them,” he said.

The Courier asked what his attitude was to the 287-G program, which deputizes Cobb County sheriff’s deputies to act as immigration agents.

Mendez said, “First off, I hope the sheriff, whoever the sheriff is (after the election) (will be) able to get rid of that program.”

“Second, as county commissioner I’ll propose an ordinance, making it clear that a 278-G warrant is not a warrant that gives any kind of federal obligations to county officials,” he said.

He said county tax dollars should not be used on immigration enforcement.

“So that’d be one of my proposals, to create an ordinance to make sure no agency is working with immigration,” said Mendez.

“And so the Human Rights Commission, will be able to help make sure what’s going on because if you look at the numbers, you’ll see that more than 50% of the people that get pulled over for licenses are Hispanic or Latino background. So how can that be? How can they say it’s not discriminatory? You look at the numbers and there’s only about 12% of the county being Hispanic, whereas over 50% of those people being pulled over for non-license (are Hispanic).”

Changing both BOC meetings to evening

“I want to propose having both (monthly) county commission meetings in the evenings,” he said. “Why? Because if you look at the county, you look at our district, the truth is most people work in the morning.”

“I know it’s great to have these meetings online,” he said. “But if you can’t attend them to speak against them, then how will your voice truly be heard? So that’s why I want to make sure both meetings are in the evening so that the working class can hear and be heard.”

Disparities in sentencing for crimes

Mendez talked about the effects of disparate sentencing on the African-American and Hispanic community, and pointed to the all-white nature of Cobb Superior Court.

He said a role of the Human Rights Commission he proposes is to make sure that sentencing is equitable and fair.

Mendez closed by saying, “As county commissioner, I want the community to truly see the power and the impact that we have to to shift our future in the right direction.”

He said the BOC should “use the power” of the BOC, “to see how we can fix the social injustice is that happening in our district. And if we speak out like the young people who are now talking about the bail bond reform … we can see that we all have a voice. And as your county commissioner, I want to be that voice. I want to be that voice that is beyond just zoning.”

For more information on the Mendez campaign, visit his Facebook campaign page.