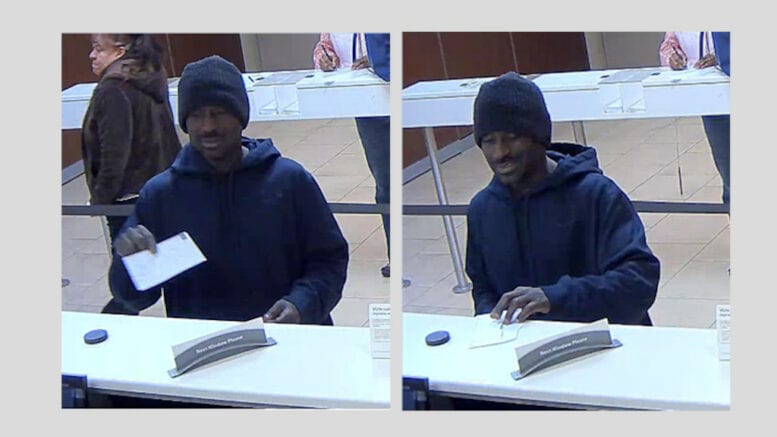 photos of suspect provided by the Cobb County Police Department

According to a public information release from Officer Sydney Melton of the Cobb County Police Department an arrest was made in connection with yesterday’s robbery of the Wells Fargo branch in Mableton on Floyd Road.

On 1/18/2020, investigators obtained an arrest warrant from the Cobb County Magistrate’s Office for 45-year-old Kenyatta Ashley. Mr. Ashley was charged with Robbery (F). He was arrested and transported to the Cobb County Adult Detention Center.

According to the booking information from the Cobb County Sheriffs Office, Ashley is from Montgomery Alabama, and was arrested on Blairs Bridge Road, Austell.

According to the original public information release from Officer Sydney Melton of the Cobb County Police Department the Crimes Against Persons Unit is investigating an alleged bank robbery that occurred in Mableton at the Wells Fargo bank on Floyd Road Thursday morning at 9:50 a.m.

The incident is described in the public information release as follows:

The suspect entered the bank and presented a demand note asking for currency. An undisclosed amount of cash was given to the suspect. The suspect fled the scene on foot.

The suspect is described as a black male with a mustache, approximately 30-40 years old, with a slender build. He was wearing a dark hoodie, jeans, shoes with holes on the top and a dark cap.

This incident remains under investigation and anyone with information is asked to contact the Cobb County Police Department at 770-499-3945.

Fatal accident on I-75 at Barrett Parkway

Two arrested, one killed in encounter with police in connection with homicide on Anderson Mill Road