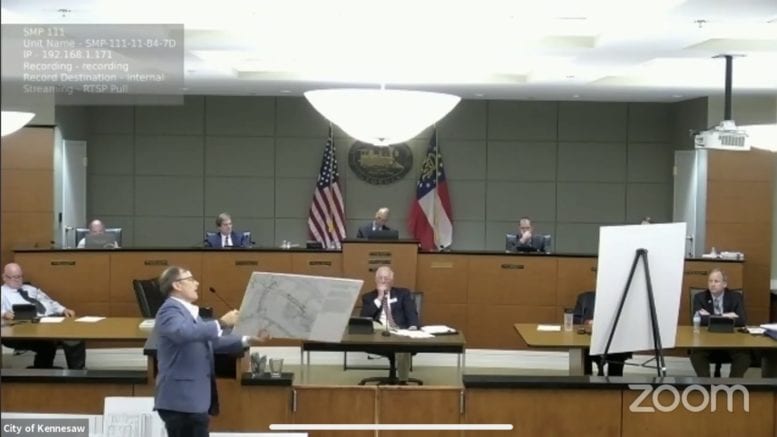 Architect Ryan Lee explains his concerns about the 1465 Shiloh Rd. property at the June 15 council meeting.

The rezoning of the 4.4-acre property at 1465 Shiloh Rd. from single-family to multi-family residential is causing friction in Kennesaw.

Fountain Residential Partners submitted the rezoning request from R-30 to RM-12 for a proposed student housing development to serve the growing population at Kennesaw State University. The RM-12 multi-family housing designation restricts more than three unrelated people from living together. However, the plan to lease to individuals by the bedroom, rather than by the unit, appears to offer a workaround to the law since the proposal includes up to five-bedroom units.

Architect Ryan Lee works out of an office that neighbors the property and says the rezoning is “in direct violation of the UDC [unified development code] and non-comforming to the RM-12 zoning.” He addressed the Kennesaw City Council on June 15 on that issue, as well as his concerns about how the density of the project will adversely affect the water and sewer infrastructure.

Lee is also worried the city is setting a precedent for any property owner in any residential area to start leasing individual bedrooms to students.

Attorney Doug Dillard, counsel for Fountain, told the council on June 15, “My client’s unique individual lease structure exempts the proposed development and site plan from the application of the definition of family. Because the individual student tenants do not operate as a single housekeeping unit under the city’s code definition, the designation of family does not apply to the proposed development so as to limit the number of units to three bedrooms.”

The planning commission approved the rezoning on March 4 after adding several conditions, including the requirement of traffic impact study, parking, security and height requirements, as well as buffers and privacy fences. The maximum number of units allowed is 52 with 241 beds. After COVID-19-related delays, the Kennesaw City Council approved the rezoning on June 15, with the recommendation of Zoning Administrator Darryl Simmons. The rezoning passed 3-1, with Councilmember Tracey Viars recused and Councilmember Pat Ferris opposed.

During his presentation at the June 15 meeting, Trevor Tollett of Fountain Residential said, “If you do not address the problem [lack of suitable student housing], you’re gonna have that infiltration into those single family homes in the neighborhoods that you do not want the students living in, where there is no control. There are no stipulations like we have in our application about security, about gating, about working with the Kennesaw Police department.”

But Lee said he believes that if Fountain is permitted to lease out units of up to five-bedrooms without applying for a variance to the RM-12 zoning, then the door has been opened to more of exactly what Tollett said they are trying to prevent. He filed a letter of appeal to the city, received June 25, regarding the zoning change. From the appeal:

“There was no vote from Mayor and Council regarding the statement from the applicant’s attorney that “Because the individual student tenants do not operate as a “single housekeeping unit” under the City’s code of definitions, the definition of “family” does not apply to the proposed development so as to limit the units to three bedroom…if confirmed this will cause every home owner in city limits, who owns property of either single family or multifamily units, to be able to rent out to more than three persons not related if they rent out by the bedroom to students. I ask that the decision for the enforcement by the zoning administrator be appealed and be enforced as written in the code, that for a RM-12 zoning, a unit cannot be designed to house more than three people not related, which would cause a maximum unit type of three people for RM-12 zonings for student housing, unless a specific variance has been approved by Mayor and Council.”

“There’s been no development plan submitted to the city for formal review and approval for any kind of development on the property in question. Now, the developer may submit a plan for housing featuring units more than three bedrooms but that is mere speculation at this point. We have no idea what, if anything, may come from this developer or any other developer…so until or unless that happens, under Georgia law, there is no ripeness, as it is called for this appeal to come forward,” Hensley said.

He also said that there was no evidence in the record showing Fountain Residential Partners was notified of the appeal, nor does Mr. Lee have standing to appeal since “he has not shown any special damages as a result of the city’s approval of this application.”

“I believe, again, that the conditions speak for themselves in the ordinance and all Mr. Simmons has done is to advise the apellant that the city staff and legal counsel have indicated that if there was a student housing development presented as it was proposed at the rezoning hearing, and specifically, that is a plan whereby individual bedrooms would be leased individually and the unit would not be leased as a unit…in that situation, the definition of family in the UDC would not apply,” Hensley said.

According to Hensley, an appeal of a rezoning must be appealed within 30 days to the Superior Court of Cobb County.

After speaking privately with Hensley at the meeting, Lee offered to withdraw his appeal with an agreement to sit down with the planning commission to try and reach an understanding. He would also retain the ability to refile his appeal in 30 days. However, Dillard, attorney for Fountain Residential objected, saying none of his appeal had any merit.

“We want this matter dismissed. The idea of withdrawing and letting him refile what is otherwise a spurious, invalid, incorrect appeal doesn’t make any sense to me,” Dillard said.

Lee responded, “My contention is this: the appeal is being brought forth because I feel like there is not clarity between what was done at the rezoning for 1465 and that in order to make a decision on to file appeal against the rezoning, this needed to be resolved…I would argue it is not premature, it’s actually in time, because I wanted to get in within the timelines of the rezoning filing of the appeal.”

Lee is not alone in his concerns about the property. While the city has received letters and emails in support of the proposed project, it has also received many emails objecting, citing the zoning issues raised by Lee, as well as traffic, safety, infrastructure and noise concerns.

Lee spoke with the Courier after the dismissal, saying he doesn’t necessarily object to student housing on the property, but the developers either need to be required to get a variance or limit plans to three bedroom units.

The city did not respond to a request for comment.

The meetings are available to be viewed on the City of Kennesaw Government Facebook page.