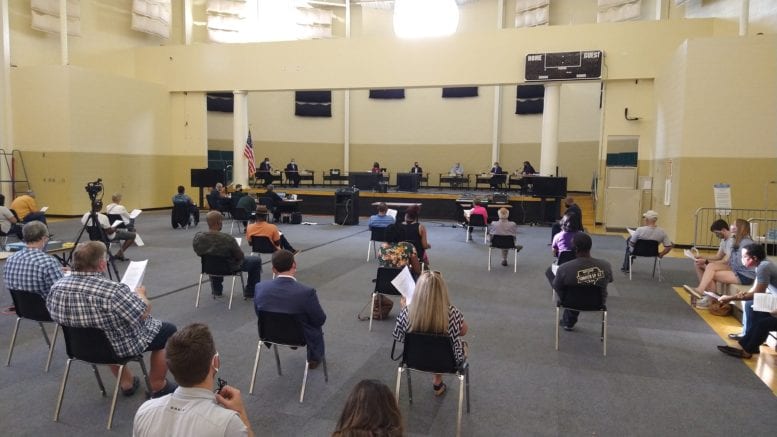 With one member opposed, the Smyrna City Council passed a long-discussed non-discrimination ordinance on Monday night.

The policy, which passed 6-1 with Corky Welch voting no, is intended to protect “the rights of all people to be free from discrimination or interference with their established civil rights,” and drew dozens of comments during a July 14 town hall meeting.

It sets up a formal complaint process for anyone who feels they are a victim of discrimination, followed by mediation and, potentially, court hearings and a civil penalty for the violator.

“This is an issue that we’ve been talking about for months,” said Smyrna Mayor Derek Norton. “This city government has been very clear that discrimination has no place in the City of Smyrna, and that this is a place that welcomes everyone.”

City attorney Scott Cochran took the lead in writing the language of the ordinance and noted that it had been through numerous changes. He said that churches and private schools are exempt from it, and that it would not allow men to compete on women’s sports teams.

“This is a lot simpler than the ordinances that some other jurisdictions have passed,” Cochran said.

Welch spoke up as soon as council members were allowed to make comments, saying he was fine with everything in the ordinance save for the part about gender identity.

Welch then listed five examples of men being cited or arrested for entering women’s restrooms, in some cases dressed “in drag,” and watching, filming or sexually assaulting the women inside.

“This ordinance is opening a door that we cannot close,” he said. “The end is not tonight’s vote, but down the road when there will be unintended consequences. That’s what we’re facing with the approval of this ordinance with the gender identity clause included.”

“Any insinuation, whether intentional or unintentional, that transgender individuals would be more likely to commit these types of crimes, I think that insinuation is inappropriate and not correct.”

Other council members spoke up to voice their support of the ordinance before it was brought to a vote and approved. There was applause in the room after the vote was announced.

Politicians seek to control classroom discussions about slavery in the US