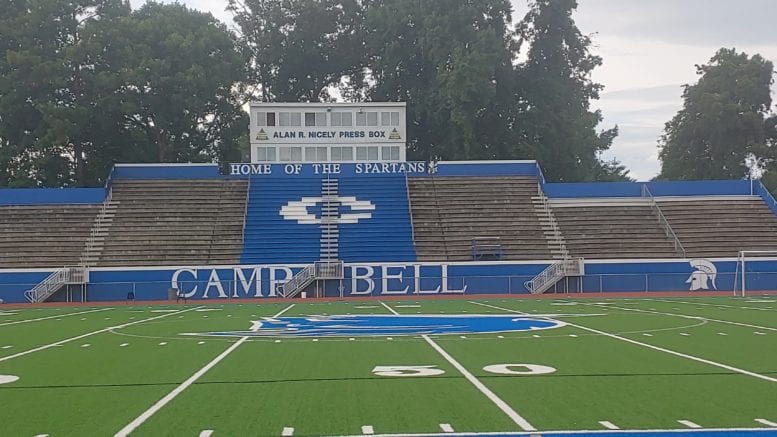 By Natalie Brevick and Sudha Gururaj

After a couple of losses on the road and a key home win on Sept. 18, the Campbell Spartans are hoping to dominate in their home game against Morrow this Friday, Oct. 9 at 7:30 p.m.

The game was originally supposed to be against Peachtree Ridge, but due to complications owing to the coronavirus, Campbell will instead be playing Morrow.

The Spartans (1-4) have lost all of their games on the road so far but won their home opener against Berkmar by a final score of 35-0.

Safety Christian Hughes leads the Spartan defense with 36 tackles, two tackles for loss and a sack, while linebackers Davion Weathers and Kaeto Nwosisi each have 30 tackles this season. Following a move from quarterback to linebacker, Ethan Wiley had five tackles and a forced fumble in last Friday’s game against Roswell, which ended in a 37-7 Campbell loss.

Campbell head coach Howie DeCristofaro has stressed the importance of defense to his team. “If the defense can make the plays we will win the games,” he said in a previous interview.

“None of our players are currently positive for COVID. However, we have had some student-athletes sidelined as close contacts who will need to quarantine,” said Peachtree Ridge’s principal Jadd Jarusinski during an interview with WSB-TV. The team decided to cancel their next two games against Campbell and Lanier.

Last season, Morrow (1-3) played into the postseason for the first time since 1998. The Mustangs boasted the region’s offensive and defensive players of the year in quarterback/wide receiver Jimmy Calloway and linebacker Owein Blas, plus first-team all-region players Kendall Shivers on the offensive line and Jabari Tucker at wide receiver. But all four have graduated. The current Morrow team is young and working to rebuild the strength that it had last season.

Kickoff is at 7:30 p.m. at Campbell’s McDaniel Stadium. Due to safety precautions, CHS football will not accept cash for tickets or concessions. Tickets for the game are available at https://gofan.co/app/events/88202.

For a global view of the COVID-19 pandemic, the Johns Hopkins coronavirus dashboard is excellent