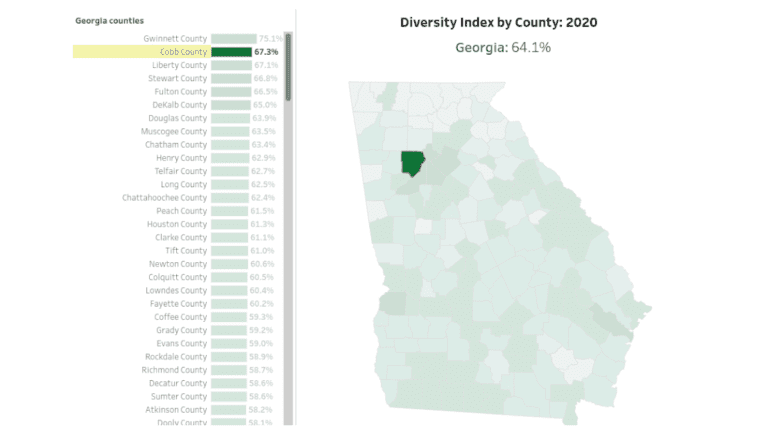 Screenshot of the Georgia Diversity Index map with Cobb selected.

According to the U.S. Census Bureau, Cobb County has the second highest Diversity Index in Georgia, with Gwinnett County at the top of the index.

The Diversity Index is measured by determining the likelihood that two people chosen at random will be of different race or ethnicity (for further details see the full definition at the bottom of this article).

The top five counties by this measure are:

The bottom five (from lowest index to highest) are:

The overall Diversity Index for Georgia is 64.1 percent, tied with Florida, and second only to Texas (which stands at 67 percent) among southern states.

In a blog post on the U.S. Census Bureau website, the Diversity Index is defined as follows:

One of the measures we will use to present the 2020 Census results is the Diversity Index, or DI. This index shows the probability that two people chosen at random will be from different race and ethnic groups.

We converted the probabilities into percentages to make the results easier to interpret. In this format, the DI tells us the chance that two people chosen at random will be from different racial and ethnic groups.

The 2020 data that the U.S. Census Bureau has released so far is the data needed by states for reapportionment. The bureau expects to release more detailed data in September, and then the public can access the data through much easier-to-use tools at https://data.census.gov.

From the editor: median home values by census tract

Redistricting will soon be seriously underway