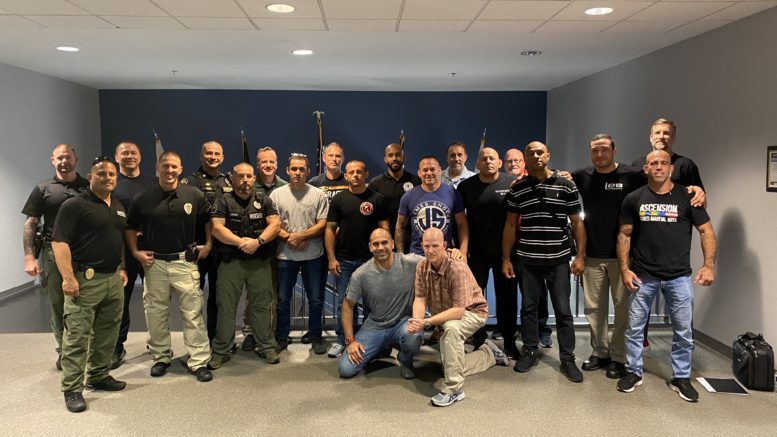 Officers of the Marietta Police Department have been training in Brazilian Jiu Jitsu in an effort to reduce use-of-force injuries, and now the Georgia Peace Officer Standards and Training (POST) Council has met with nine of the top Brazilian Jiu Jitsu (BJJ) gym owners at the Marietta Police Department (MPD) to discuss creating official POST certification and training in BJJ for Georgia’s law enforcement personnel.

In a public information release Ofc. Chuck McPhilamy of the Marietta Police Department sent the following description of the MPD’s existing program, and how training in BJJ affects use-of-force injuries.

Since 2019 MPD Major Jake King has been implementing the gentle art of BJJ into all MPD use of force training.  Major King negotiated a partnership with 3rd Degree Black Belt coach Humberto Borges, the owner of Borges Brazilian Jiu Jitsu (a local gym).  With the partnership in place, the department began mandating and paying for all new hires to attend weekly training sessions under Humberto’s direction.  The program was so successful it was opened to all existing MPD officers the following year.  Next, Major King began collecting use-of-force data, and specifically distinguishing between officers that did or did not participate in BJJ training.  The data was eye-opening; dramatic reductions in injuries when force was required to effect an arrest, both to officers as well as people resisting arrest.

On August 11 Maj. King and Borges organized the meeting with the POST officers to discuss possible certification of officers statewide.

Maj. King and Borges will present at the next full Georgia POST Council meeting on September 8.

Ofc. McPhilamy wrote, “We are proud and honored to have this opportunity to share our findings with the law enforcement leaders that comprise the full Georgia POST Council!”