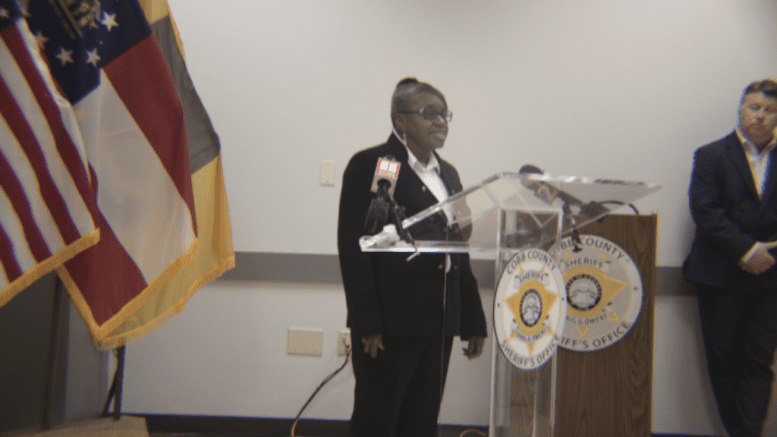 With a press conference and a ribbon-cutting ceremony, the Cobb County Sheriff’s Office officially kicked off its program of providing 24-hour mental health services for detainees at the Cobb County Adult Detention Center.

The program will be operated by Wellpath, and will include an onsite psychiatrist during the day, along with psychiatric nurses and licensed practical nurses to provide 24-hour coverage for the program.

Sheriff Craig Owens announced that the program is the first among Georgia jails, and he hopes that it can become a model for other sheriff’s offices and detention centers.

“I don’t think it’s really a surprise to probably anybody in this room that our jails, for a number of different reasons, have become the largest providers of mental health services around. And so that’s not an ideal situation …” he said.

“There are a number of downstream benefits that I think that this county will receive from this program, and specifically, that the court will get from it,” he said.

“Number one, I think it’s going to position people to be better situated when they arrived in court,” Leonard said. “Right now most of the time, I don’t even know that there’s a mental health issue until the case is already on my active calendar.”

He said at that stage the realization that a mental health issue is involved can result in months of delay.

“Number two, I think it’s going to increase everybody’s likelihood for success,” he said. “At some point, these folks are going to get out of jail, maybe getting a bond,” he said.

Lastly, he said, the program can work with the court to identify eligible candidates for the Accountability Courts.

“We’ve got several different accountability courts that dovetail nicely with this, including our Mental Health Court, which has been recognized as a model for the State of Georgia and our Veterans Court and our Drug Treatment Court,” he said.

“So our Accountability Court judges stand ready to step in and get our teams ready to snap those cases up once those are identified at an earlier stage,” Leonard said. “Those are the benefits I think we’ll see.”

Cobb County Manager Jackie McMorris expressed support for the program on behalf of the Cobb Board of Commissioners and BOC Chairwoman Lisa Cupid.

“Regardless of who you are and your circumstance, mental health affects all of us in some way or the other,” McMorris said. “It stigmatizes our community, and we can do better.”

She said the program will provide a positive impact on family members who have been affected by diagnosis or misdiagnosis of mental health issues.

She said the county looked forward to the program making a true difference in the lives of the detainees, and “hopefully reduce recidivism.”

State Representative David Wilkerson (HD-38) said “You have people working in our jail that may not make as much as you think they do.”

“And they’re dealing with some tough situations. So this is gonna provide them the tools that they need, because they can’t do both, they can’t be a mental health professional and do the job,” he said. “This will give them those tools. And so I just want to say, hopefully, we’ll be able to take this, and the legislation will kick in some money.”

He said he hoped the program could be implemented across all Georgia counties.

“You are taking a very important innovative step in dealing with this very challenging issue,” he said. “We serve some 300 agencies around the country and mental health is the biggest issue in all of them.”

“Our job is to take care of a very vulnerable population, in very challenging clinical environments,” he said. “It’s what we do. And we see it from the ground, we understand the challenges.”

“And in some places around the country, people are beginning to do very important work. This is at the top of that list. So you’re to be commended for this, thank you for making this important decision,” Hallman said.

Donna Carter, Wellpath’s Southeast Regional Director of Mental Health Services, gave an overview of how the program would work.

“As you have heard, jails are now the new psychiatric hospital,” she said. “We have now a clinical team of licensed clinicians that will be providing the care for those patients.”

“We also have a full-time discharge planner that will be working along with the team to make sure those patients are getting handed back into the community, making sure that they’re getting the proper care not only while they’re here, but able to connect when they’re in the community.”

“We also have a full-time psychiatric team,” she said. “So we have three psychiatric providers that will be here full-time seven days a week, that we’ll be able to provide care for our patients as well to make sure that they’re getting the type of not only diagnosing and treating but medication management, or whatever assistance they may need from a team of medical providers.”

Highland Rivers Behavioral Health Governing Board of Directors to meet on Wednesday, April 27