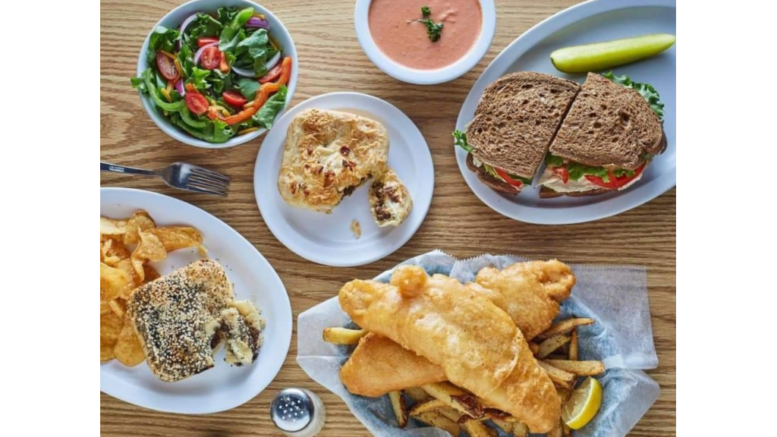 For more articles on food in Cobb County follow this link to all our Second Helpings columns by Brian Benefield.

Neville Steel and Mark Allen were born in the same hospital three weeks apart in the outback town of Boort.

Little did they know that their childhood bond would sustain a lifetime and take them halfway around the world to introduce Americans to the Australian Meat Pie and open the original Australian Bakery in Marietta Square.

The young men lost touch in their teenage years, but both had a strong desire to become master bakers, and as luck would have it, they reunited coincidentally at William Angliss Food College in Melbourne. Out of three-thousand students, Mark and Neville graduated number one and two in their class, so simply put, they were the best of the best.

Wendy Beyer, a friend of Marks, opened a bakery together with them in Pyramid Hill, Australia, in the 80s, where they did things the old-fashioned way by mixing dough by hand and developing meat pie flavor profiles.

Wendy has a background in banking and finance but is rumored to have a great set of taste buds to help with quality control.

According to Neville, the meat pie originated when coal miners needed something to eat while doing their work deep within the earth. Wrapping meat, vegetable, and dessert in a pastry would keep it from getting dirty with soot, so the miners would eat all the good stuff and toss the dough aside.

In 2001 the dynamic trio joined forces again to open the Australian Bakery Cafe on Marietta Square and quickly became a popular spot amongst locals and expats alike.

We got to know Neville, a third-generation master baker, very well through the food tours we conducted for many years, and he rarely missed an opportunity to come out and greet everyone with a big smile and answer questions in the accent everyone loves to hear.

Nev, as we call him, is a hard-working, very affable guy who loves to talk about his homeland and all the delicious eats they offer. With over thirty varieties of meat pies, some of their top sellers are the original pie with USDA ground chuck, ground beef in a seasoned gravy with a flaky pastry top.

Another favored pie by the locals is steak, cheese, and bacon. We emphatically agree with Nev when he says, “Americans love cheese and bacon.”

My favorite is the Buffalo chicken pie, and it’s like eating a hot wing in a delicate pie crust, so zesty and flavorful! Neville works in the bakery six days a week, sells over two-hundred-fifty thousand meat pies a year, and ships to their loyal customers around the globe.

Some other crave-worthy things to come in for are Fish and Chips, which were named best by the AJC. Prepared with an Australian Northern Roughy fish that is beer-battered, served with fresh, thick-cut chips (fries), and served with a squeeze of lemon and tartar sauce. These are the real deal, trust me!

If you have a sweet tooth, then order the Pavlova, a meringue made with egg white and sugar, topped with kiwi fruit that melts in your mouth.

Another must-try is the Lamington cake, which is sponge cake dipped in chocolate and rolled in coconut. I dream about this cake, no, really I do.

Tuesday evenings, the bakery hosts bluegrass musicians from all over that come in for jam sessions, and it’s not uncommon to see ten to fifteen players gather on the sidewalk in the warmer months to pick their banjos and guitars to the delight of many onlookers.

On Wednesday, December 1st, they are celebrating twenty years of serving up all your Aussie favorites, so be sure to stop in and say G’day to Neville, Mark, and Wendy. Enjoy a meat pie, sausage roll, or one of their many other appetizing delights. Once you visit the Australian Bakery Cafe, meet the friendly people and see all they have to offer, you will be hooked for life.

Brian Benefield is an Atlanta native born in Dekalb County, who has lived in Cobb since 2003.

He has worked in Hospitality, Marketing, Real Estate, and most recently Food Tourism.

They have a dog, Miss Pickles.

Hobbies are mountain biking, running, gardening, and trying new recipes in the kitchen

Member of Les Marmitions cooking club since 2016, where we cook 5-course meals with local Atlanta chefs.

Forks & Flavors and the fight against systemic racism