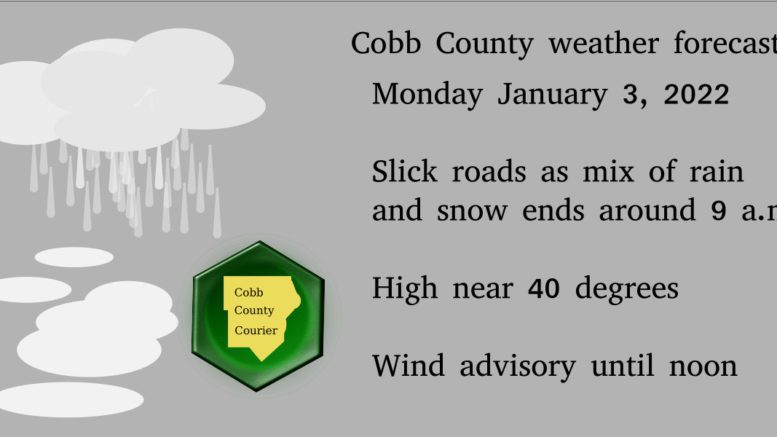 According to this morning’s report from the National Weather Service, Cobb County and much of north Georgia could experience slick roads as the mix of rain and snow ends. A winter weather advisory remains in effect for parts of north Georgia until 9 a.m.

The NWS issued the following Hazardous Weather Outlook for portions of north and central Georgia, including Cobb County:

Today and Tonight… A mix of rain and snow will end this morning over north Georgia. Slick roads may make morning travel difficult. A Winter Storm Warning and Winter Weather Advisory remain in effect until 9 AM for parts of north Georgia. Sustained winds of 15 to 25 mph with gusts to 45 mph are possible through this morning as the weather system exits the state. These winds may bring down trees or limbs, and in some cases result in power outages. The Wind Advisory expires at noon. .

There is a possibility for some mixed wintry precipitation in far north Georgia late Wednesday into early Thursday and again Thursday night into early Friday. Accumulations are not expected at this time. Stay tuned to the latest forecast through the week for more details. .

Spotter activation is not requested but spotters are encouraged to submit reports of winter weather through the web by going to weather.gov/atlanta. Please relay any information about observed severe weather to the NWS while following all local, state, and CDC guidelines.

We are also under a wind advisory until noon Monday. The National Weather Service describes it as follows:

* IMPACTS…Gusty winds could blow around unsecured objects. Trees or limbs could be blown down and a few power outages may result.

Today Rain and snow likely before 7 a.m., then a chance of snow between 7 a.m. and 9 a.m. Patchy fog before 8 a.m. Otherwise, cloudy through mid-morning, then gradual clearing, with a high near 40. Windy, with a northwest wind 15 to 25 mph, with gusts as high as 40 mph. Chance of precipitation is 70%. Total daytime snow accumulation of less than a half inch possible.

Tonight Clear, with a low around 28. Northwest wind 5 to 10 mph becoming light and variable after midnight. Winds could gust as high as 20 mph.

Tuesday Night Partly cloudy, with a low around 35. Southeast wind 5 to 10 mph.

Wednesday Mostly cloudy, with a high near 54. South wind 5 to 10 mph becoming west in the afternoon.

Wednesday Night A 20 percent chance of showers after 2 a.m. Mostly cloudy, with a low around 36.

Thursday Showers likely, mainly after 8 a.m. Mostly cloudy, with a high near 53. Chance of precipitation is 60%.

Thursday Night Rain showers likely before 3 a.m, then a slight chance of rain and snow showers. Mostly cloudy, with a low around 24. Chance of precipitation is 60%.

Friday Night Mostly clear, with a low around 28.

Saturday Sunny, with a high near 49.

Saturday Night A 20 percent chance of showers. Mostly cloudy, with a low around 39.

Sunday Showers likely. Mostly cloudy, with a high near 57. Chance of precipitation is 60%.

Wind advisory in effect for Cobb and much of north Georgia