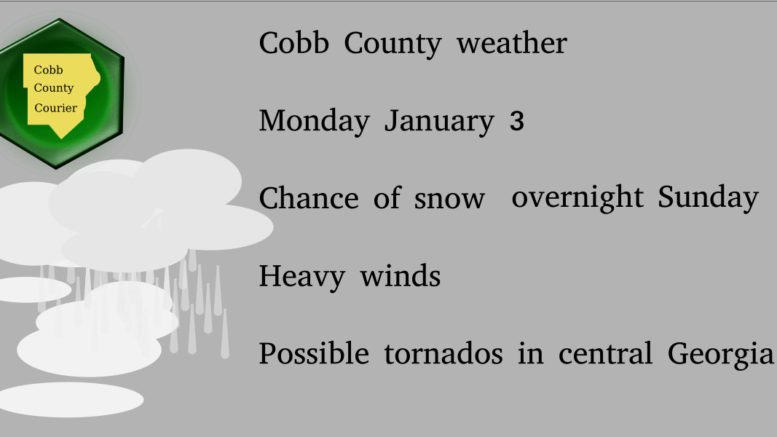 The National Weather Service has posted three new hazardous weather outlooks for Cobb County and other parts of North Georgia. The forecast is for a chance of an up to one-inch dusting of snow, with wind gusts of up to 35 mph.

Here are the advisories posted on the NWS website.

… * WHAT…Wet snow expected with light snow accumulations from a dusting up to one inch. Winds gusting as high as 35 mph.

* WHEN…From midnight tonight to 9 AM EST Monday. * IMPACTS…Plan on slippery road conditions. The hazardous conditions could impact the morning commute. PRECAUTIONARY/PREPAREDNESS ACTIONS… Slow down and use caution while traveling.

A Tornado Watch has been issued for portions of central Georgia until 9 PM EST where a broken line of showers and thunderstorms will be capable of producing scattered damaging wind gusts and a tornado or two. Tonight, a wintry mix of rain and snow is expected to begin after midnight for portions of northern Georgia through 9 AM EST. A Winter Weather Advisory has been issued for portions of north and northwest Georgia, mostly along and north of I-85 where snow accumulations could range from a dusting to 2 inches. In the higher elevations, mostly above 1500ft in far north Georgia, a Winter Storm Warning has been issued with snow accumulations between 1-4 inches possible. In addition, strong sustained winds from the northwest behind the cold front tonight into tomorrow morning has prompted a Wind Advisory with sustained winds from 15 to 25 mph with occasional gusts up to 40 mph expected. .DAYS TWO THROUGH SEVEN…Monday through Saturday… Snow showers will be exiting the region Monday morning with strong winds expected through noon, especially in areas of high terrain in the north Georgia mountains. Please use caution when driving as roads Monday morning as they may become slick

. .SPOTTER INFORMATION STATEMENT… Spotter activation is requested for today across portions of north and central Georgia

* IMPACTS…Gusty winds could blow around unsecured objects. Tree limbs could be blown down and a few power outages may result.

Overnight Sunday Windy. Chance of rain late, then rain in the late evening and early morning. Chance of rain and snow late. Snow accumulation up to 1 inch. Lows in the lower 30s. North winds 5 to 10 mph increasing to northwest 15 to 25 mph. Chance of precipitation 90 percent.

Monday Night Clear. Lows in the upper 20s. Northwest winds up to 10 mph shifting to the northeast after midnight.

Wednesday Night Mostly cloudy with a slight chance of showers. Lows in the mid 30s. Chance of rain 20 percent.

Thursday Night Partly cloudy with a chance of showers in the evening. Lows in the mid 20s. Chance of rain 30 percent.

Saturday Night Mostly cloudy with a chance of showers. Lows in the upper 30s. Chance of rain 30 percent.

Sunday Mostly cloudy with a chance of showers. Highs in the mid 50s. Chance of rain 50 percent.

Cobb weather outlook October 30: Cloudy with a chance of showers

Be the first to comment on "Chance of Snow, high winds, and possible tornados forecast for North and Central Georgia including Cobb County"