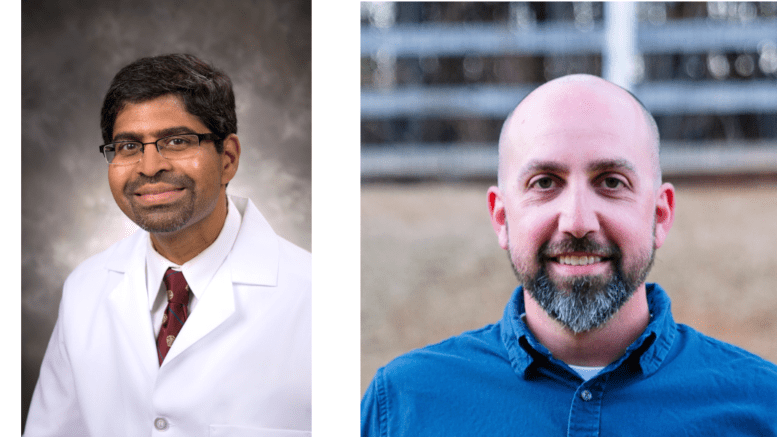 Hullihen developed colorectal cancer at the unusually early age of 34, and underwent treatment under a team that included Dr. Shroff.

We spoke with Dr. Shroff and Hullihen via teleconference on separate days.

Tell us a little about your role at Wellstar Health System, Dr. Shroff.

“Primarily, my role is a surgeon for cancer patients,” Dr. Shroff said. “But I also participate in cancer quality programs within our system.”

“I’m the cancer liaison physician between the Commission on Cancer and Wellstar Health System,” Shroff said. “And I also have helped chair some of the subcommittees such as the GI subcommittee.”

Tell us about Scott Hullihen’s case.

Shroff said that Hullihen experienced abdominal pain and some rectal bleeding for a few weeks.

“He underwent a colonoscopy that showed that he had a mass in his middle portion of his rectum,” Shroff said. “And this obviously was biopsied.”

“This confirmed that it was cancer,” he said.

“What struck me about Scott is that his symptoms were not unusual, nor was his diagnosis,” said Shroff. “But what was unusual about this situation was how young he was.”

“This is a 34-year-old male, with no significant family history or any personal history of cancer, and no other real evident risk factors,” he said. “But who had this devastating life-threatening condition.”

Shroff said that within Wellstar there is a process to manage patients with colorectal cancer that includes nurse navigation, dedicated and specialized medical oncologists, radiation oncologists, and surgeons.

He said that because of these processes, Wellstar’s colorectal cancer program has received accreditation from the National Accreditation Program for Rectal Cancer (NAPRC).

“Scott then ultimately went on to get chemotherapy for a few months,” said Shroff. “Subsequently, he underwent radiation to his primary cancer in the rectum, and then about eight to 10 weeks after his last dose of radiation, I took him to the operating room to remove the cancer from his body.”

“And the best part is that when the pathology report finally came out, he had had a complete response to his cancer … meaning under surgical specimen, there was no residual disease,” he said.

“We know from multiple studies that patients who have a complete response have a good long-term outcome as well,” Shroff said.

What is the difference between colon cancer and colorectal cancer?

“Getting colon cancer is a cancer of the colon, while the rectum is the lowermost portion of the large intestine that leads to the anus,” he said. “But there are some inherent differences between colon cancer and rectal cancer.”

“I think the difference is predominantly on the biologic behavior,” said Shroff. “Rectal cancer tends to be more aggressive, they tend to have a higher incidence of lower lung metastases.”

He said that because the rectum is in the constrained space in the pelvis, the treatment is more complex.

Talk a little about testing for colorectal cancer.

Dr. Shroff said that the usual recommendation is for testing to begin at 45 years of age.

He said that for a person with high-risk features, who has a strong family history of inflammatory bowel diseases, such as colitis, or a history of any other genetic syndrome that causes colon cancer, testing should be more frequent and begin at an early age.

Are there things that can be done to reduce the risk of colon cancer?

Dr. Shroff said the risk factors include being overweight, lack of exercise, and eating a predominantly red meat-based diet.

“So the things that we generally recommend for prevention of colorectal diseases, the behavioral changes, are incorporating regular exercise in your routine, making sure that you’re eating a well-balanced diet.”

He said that a plant-based diet is preferable.

“And if you’re eating red meat, either in the form of beef or lamb or pork, then you want to limit that to less than 18 ounces over a week,” Shroff said.

“Alcohol ingestion also is associated with colorectal diseases, and cancers,” he said. “Moderating the amount of alcohol you consume on a regular basis will also go a long way in preventing this kind of disease.”

Do you have any closing words for the Courier’s readers?

Shroff said that the takeaway from Scott Hullihen’s story is that he was young, yet he developed colorectal cancer.

“I think it behooves all of us to be mindful that nobody is immune from this disease, we have to be careful and take care of ourselves … make sure we eat healthy, get plenty of exercise, avoid smoking and alcohol excessively,” he said. “And I think that will serve us well in the long run.”

He said that Wellstar has a dedicated team of professionals and robust programs to take care of cancer patients.

A conversation with Scott Hullihen

We next talked with Scott Hullihen, who developed and was treated for colorectal cancer starting at age 34.

Tell us about when you were first diagnosed and what symptoms caused you to seek testing.

“I first got symptoms in April of 2020. I started to get some cramping in my stomach, and things like that,” he said. “Then eventually I got a colonoscopy in August. They saw the tumor then.”

Talk to us a little about yourself

“I’m a project manager for a company that installs below ground cable. So I’ve projects in Cobb County, Douglasville, Paulding County, everywhere, all the time, constantly busy getting this stuff done,”
he said. “As a matter of fact, I’m sitting on a project now.”

“I spend my time with my girlfriend and Parker, who’s 10,” he said. “And I spend my time on my property. I’ve got some property out towards Augusta, we have 1100 acres out there.”

“So we hunt and fish out there and play out there on four-wheelers and all that kind of fun stuff,” he said. “And I spent time with friends and family.”

What happened once you were diagnosed?

“From the colonoscopy, I saw Dr. Shroff for the first time,” Hullihen said. “I was scared. I was definitely nervous.”

“I said, ‘Well, okay, I believe you, because I don’t have any other choice’.”

“And he was exactly right,” Hullihen said.

Hullihen said he started chemo almost immediately. He was diagnosed on August 27, 2020, and started chemotherapy at the beginning of September. Chemo continued until December 16.

He was then given radiation therapy for 28 days in January of 2021, and then surgery took place.

“So it was pretty intense,” he said. “You just have to stay positive throughout the whole thing. And you just have to push forward and you have to trust the doctors and trust the team because they know exactly what they’re doing.”

“And they saved my life,” said Hullihen.

He said the chemo treatments started out okay.

“I felt like, hey, I’m 35 I’m pretty tough. I’m pretty strong. I can get through this no problem,” he said. “But that was not the case I found about halfway through.”

“It was tough. It was tough to eat at times. At times I felt sick. You know, stuff like that,” he said.

“I told my doctor on my fourth treatment, ‘Hey I’m done, I can’t do this anymore, I give up.'”

“So he pushed me through and I finished. I was just being kind of stubborn, I guess,” Hullihen said. “But I completed it, and it got better.”

“But from chemo in December to the start of radiation, I got a break in between there. And that was really helpful to kind of, you know, come back to life again,” he said. “I could eat again. It was just better. Radiation was perfectly fine. It was painless. And it was perfect. And it was so easy. It was awesome.”

How did this change your lifestyle?

Hullihen said he tried to maintain that pace during chemo, just to “stay normal.”

But during chemo, he had to slow down.

“But now I’m 100% back to normal, back to all the spending time with my friends and my family and hunting,” he said. “So, back to being busy.”

I hear you have a unique piece of art that came out of your experience.

Hullihen said that his girlfriend and her daughter had given him a very special gift.

He had two CT scans immediately before Labor Day 2020. Since under normal circumstances the lab would not send the results until the Tuesday after Labor Day, one of his doctors, Dr. Davies, thought it was unfair that Hullihen would have to wait an extra day for such stressful news.

“So Friday, about four o’clock, I had completed my third scan of the day,” he said. “I came out to my truck. I turned on my phone. And I had this amazing voicemail from Dr. Davies, essentially telling me that the cancer was in my colon only.”

“It had stayed in my colon and it was curable, and it was fine. And it’s not a big deal.”

“I cried instantly, because I was so happy and so relieved that it was in the colon and not spread throughout my body,” he said. “So I saved that voicemail forever. I played it constantly.”

“Fast forward to December 16, of ’21. My girlfriend and her daughter got a canvas printed. And in the corner, it’s got a QR code,” he said. “If you take your phone and scan that QR code, it plays that very voicemail that he left me.” he said.

“And it’s really the coolest thing you’ve ever seen in your entire life,” he said. “And so I get to see it every single day. It’s so amazing that she did that, for me, so thoughtful. I mean, it’s probably the most thoughtful gift I’ve ever gotten from anyone. And it’s just amazing.”

Do you have any advice for our readers?

“If you feel something going on that’s not right in your body, go to the doctor,” he said. “Get tested, get checked out. Don’t hesitate. Don’t wait.”