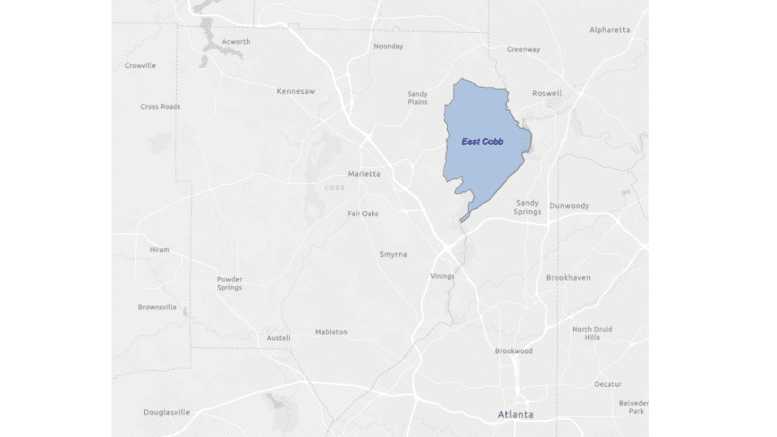 As the final week of advance voting proceeded, public safety officials addressed concerns in a virtual public forum, while cityhood proponents and opponents sparred over the legitimacy of the feasibility study.

Of the three cityhood referendums on the May 24 ballot, East Cobb is the only one with plans to take over police and fire services. This has been a cornerstone of anti-cityhood activists’ arguments, questioning the decision to drop Cobb’s highly-rated services. Nor do they believe the feasibility study paints an accurate financial picture of starting new public safety departments.

While the feasibility study estimates the cost of operating a city fire department at $5.7 million per year, the county estimate for the area is $12.4 million.

“The state of Georgia has only authorized four organizations to provide feasibility studies. This is required as part of the process to form a city,” he wrote in an email to the Courier.

Cobb County Police Chief Stuart VanHoozer said his 716 sworn officers and just under 100 non-sworn positions make up the fourth largest police department in the state. The department answers about 350,000 calls a year, including proactive calls such as traffic stops. Precinct 4 covers east Cobb.

“Compared to other police departments in our area, metro Atlanta…we have the lowest crime rates of those jurisdictions,” he said. “We’ve had seven homicides so far this year versus Atlanta having 68. And so it’s a pretty big difference between how we’ve managed crime in Cobb County, and how some of the other agencies have done it. They’ve worked very hard, the other agencies do…but what’s special about Cobb County…the state mandates a 10-week academy. We have our own academy and we have a 27-week academy,” he said.

The homicide clearance rate last year was 96% while the national average was 58%, according to VanHoozer. Only once in the last five years did the clearance drop below 90, achieving 86%.

Cobb’s police department has about 30 specialized units, including gangs and narcotics. It would be up to the city to decide what units to create. VanHoozer said because they have so many specially-trained officers, smaller departments in nearby cities sometimes request assistance in particularly challenging cases.

Deputy Fire Chiefs Carl Crumbley and Mike Schutz addressed concerns about increased response times in the northeast corner of the county if the city passes.

“There would be a delay in that area that’s currently served by station 15 which would become part of the city, and we would have to look at making adjustments to that in the future if it was significant, but I don’t believe the delay would be significant,” Schutz said.

Alterio said with multiple 911 centers there’s a risk of delay when calls have to be transferred.

“The feasibility study doesn’t really mention if they are interested in a new 911 center or not,” she said.

According to an FCC study, those transfers can cause a 40-second delay. Although the city of Marietta has its own fire department, 911 calls go through the Cobb 911 and dispatches are immediate. Kennesaw and Acworth share their own 911 service and, according to Alterio, that can add to response time.

None of the departments anticipated layoffs as a result of the city forming.

The recorded session can be viewed in full here.

In April, Cobb County announced a new website for the top-rated ISO class 1 fire department called World Class Cobb Fire. A banner with “World Class Fire Station” went up at the East Cobb Government Service Center’s fire station. According to county officials, the recruitment campaign has been in the works for a while in recognition of the department’s 50th anniversary.

Chapin saw it as something else. He wants the website and banner removed, stating the campaign is in violation of state law.

“Georgia’s law prohibits a county from using taxpayer funds to campaign against referendums. The East Cobb Cityhood Committee has notified Cobb County of its illegal behavior and has additionally asked the attorney general to open an investigation to the county’s violation of OCGA § 21-2-414 regarding the campaign promoting the “World Class Fire Department,” launched to coincide with the start of early voting on the cityhood referendums,” Chapin told the Courier.

The fire station with the banner is also a polling station, which Chapin said makes it “clearly illegal and the county cannot hide behind a campaign to coincide perfectly to start the same time as early voting within the same venue.”

An email sent by cityhood opponents Sunday called Chapin’s claims about the fire department campaign “the pinnacle of absurdity.”

The email also accused the cityhood committee of violating state ethics laws by not disclosing all contributors.

In turn, Chapin accused the Alliance of peddling conspiracy theories to distract voters.

“Since receiving an inquiry from the local media, we talked with legal counsel this week [and] confirmed a 501(c)(4) is not required to file disclosures,” Chapin said.

The Alliance also alleged possible fraud in the feasibility study. Member Bob Lax compiled this analysis based on open records requests for communication between cityhood proponents and Georgia State University’s Center for State and Local Finance.

Chapin called the fraud allegations “a complete distraction from the real issue we are voting on which is local control, out of control county spending and the Cobb County direction of the urbanization of our neighborhoods.”

He wrote, “In a last ditch effort to confuse voters, the East Cobb Alliance is claiming the feasibility study is fraudulent. Georgia statute requires a city provide three services. We could have taken three low-cost services that would have been feasible with no tax increase. The East Cobb Alliance cannot accept the simple truth that East Cobb pays more than two times their share in taxes for services we do not receive. It is the hard truth. Supporters of the City of East Cobb are tired of paying the most and comparatively receiving the least in services from Cobb County.”

Voting times and locations are available on the Cobb County elections website.