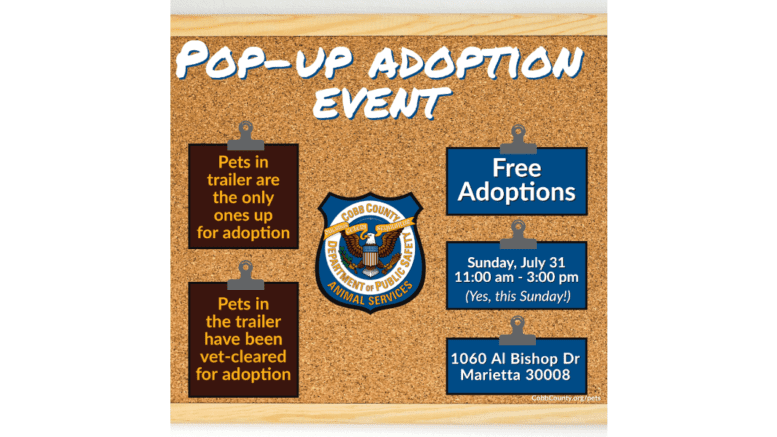 The Cobb County Animal Services Shelter remains closed due to the strep zoo case discovered at the shelter.

However, Dr. Amy Belew, the shelter’s veterinarian, has approved some pets for adoption, and will have them available in a trailer set up at the near the shelter, located at 1060 Al Bishop Drive, Marietta GA 30008.

The announcement of the event stated:

Cobb County Animal Services wants to see you THIS SUNDAY for our FREE ADOPTION pop-up event! The pets on the trailer are the ONLY PETS up for adoption. They have been cleared for adoption. Join us on SUNDAY, JULY 31 from 11am to 3pm to take home your #foreverfriend

Below is a reprint of our original article about the case of strep zoo discovered at the shelter.

“The people are nice here but I do NOT LIKE THIS TABLE … please adopt me!” Cobb County Courier Dog of the Day

“Please adopt me! I’m a sweet boy who’s been living outside, and I could sure use a family!” Cobb County Courier Cat of the Day

“I know I look sad now, but I’d cheer up if you adopt and take me home!” Cobb County Courier’s Sad Dog of the Day, December 13

“When you’re in the doctor’s office do YOU feel happy? Please adopt me and cheer me up!” Cobb County Courier Sad Cat of the Day: December 16