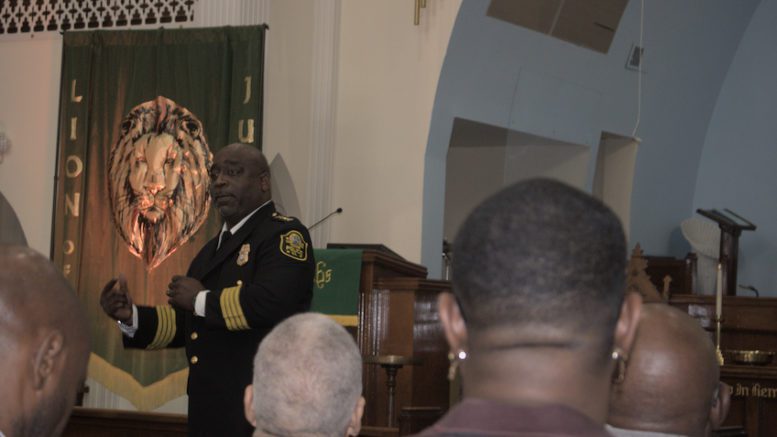 The sanctuary was packed with local residents, elected officials and government staff, along with representatives from law enforcement and the criminal justice system, including Cobb County District Attorney Flynn Broady Jr. and Sheriff Craig Owens.

Hamilton was appointed police chief in August after retiring from the Cobb County Police Department with 27 years of service. Once taking the job he began an immediate reorganization of the department.

He began by describing his first meetings with Austell police officers.

“So, of course, they, as in the police department, had no idea who I was,” he said. “They had heard all the accolades, they’d seen the bio, they read about it in the newspaper, they heard all the news stations talking about this Scott Hamilton guy, right?”

“Some of my Cobb County police officers at the time kept coming up and laughing,” Hamilton said. “And they were saying that a lot of Austell PD officers were cornering them on the street, like, ‘Hey, what’s he like? You know, what kind of guy is he?'”

“And luckily, for the most part, I think they told them that I was pretty cool,” he said.

He said the transition was rough, for both him and the Austell police.

“They had had the same regime for many, many, many years,” Hamilton said. “And then I come in, the new kid on the block.”

“So of course, my first thing that I gotta do is establish the trust with these men and women,” he said.

Hamilton said that during the first staff meeting, he asked “Who knows the Austell Police Department mission?” He said there was complete silence, and that he told them the next time they met they would know the department’s mission.

He then described the department’s mission and quoted from it:

“It is the mission of the Austell Police Department to legitimize trust, through collaborative partnership, transparency, and educating the people we protect and serve.

“We will deliver equitable services when providing resources and enforcing state laws to enhance the quality of life.

“We recognize optimal training and consistent accountability of our staff will solidify these efforts.”

Hamilton said that once the department had the mission statement, the command staff assessed the department’s current leadership and personnel needs.

He said they had to examine the current structure of the department and see what was working and what wasn’t.

They evaluated the internal divisions and operations of the agency to see if they were meeting the needs of the department.

That included evaluating the uniformed patrol divisions, the training, the quartermaster, and the administrative tasks support service divisions.

They had to look at the law enforcement partnerships that had been formed over the previous several months, and see if they were meeting the needs of the department.

“And then we’re going to talk about law enforcement partnerships that we’ve formed over the last several months that I’ve been the police chief,” Hamilton said.

“If the Austell Police Department messes up, their chief is going to come out in front of the camera: Fox Five, Channel 11, Channel 2, I’ve been in front of them all before, right? No big deal,” he said. “But I’m going to go out and we’re going to talk about what we did.”

“I don’t have a problem with it,” said Hamilton.

“Sometimes I’m not gonna be able to say in the media based on maybe some investigation going on. But for everything that I can talk about, we’re going to talk about, because I’ve learned a long time ago, those days of ‘no comment’ are over,” he said.

“And if you’re a police chief, and you’re still saying no comment, you’re way behind the curve,” he said.

He said that when he was in the Cobb County Police Department, and an incident involving the police department happened, he would get a call from Cobb NAACP president Jeriene Grimes, Cobb SCLC President Dr. Ben Williams, or criminal justice system advocates Pax or Sally Riddle, and meet with them.

Hamilton said an exception to transparency was when a police officer fired a gun, an “officer-involved shooting”, because at that point the investigation is turned over to the Georgia Bureau of Investigation, and video and further information is unavailable while the investigation goes on.

“Once it’s in the GBI hands we can’t talk about it,” Hamilton said. “Then it goes to DA (Flynn) Broady’s side of the house.”

“Then when the DA gives his blessing on what we’re going to do, we can talk about it,” he said. “But at the end of the day, what you’re not gonna hear from me is ‘no comment’.”

Hamilton then talked about the requirement that officers treat residents of Austell with respect.

“You can’t go out here and expect just because you’re wearing this badge, that people just gotta respect you,” he said. “Just because you got a badge and a gun on doesn’t make you Superman or Superwoman.”

“And they just don’t bow down,” he said. “You got to be respectful. You go to someone’s house on a domestic (call), that’s the worst time of their life, they have a problem.”

“You can’t just roll up in somebody’s house tomorrow, (and say) ‘I’m gonna come in inside and tell him what to do. Sit down, shut up’.'”

“How would you feel if they come to you (and say) ‘sit down shut up’ in front of your wife, your kids? No matter what the situation is we’re going to be respectful,” said Hamilton.

He then talked about the requirement that the officers represent the department well in their off-duty behavior.

He said that even though, to a point, the officer’s off-duty time is their own, they have to uphold the law even when off duty.

He said that although officers may think they can do whatever they want when they are off duty, they have signed an oath to uphold the law and should not be breaking it.

He also said officers should not be doing anything crazy or getting intoxicated while off duty, as they will still need to put on their uniform and enforce the law the next day.

Hamilton then discussed his process of changing the organizational structure and bringing in new officers and staff from outside the department.

He said that the organization was not efficient and needed to be streamlined. He added positions, broke the department into two divisions, patrol and 911, and added a community liaison.

He also requested more personnel from the City Council and gave raises and signing bonuses to experienced officers.

Hamilton also said he brought in new leadership to help change the culture and make the department more professional.

The Conduct Review Board is made up of an officer, sergeant, lieutenant, captain, and the deputy chief. Hamilton said the board is used to review any issues that arise and to ensure that the department is upholding high standards.

The police department was restructured into two divisions, patrol and 911, with a lieutenant, two sergeants, and four officers under their control. The city council voted to give city employees a salary increase and a signing bonus for experienced officers. The chief also brought in more people to the department to ensure the right leadership was in place. An internal affairs division was also created to hold police accountable.

Hamilton said it was also determined that Austell’s city jail was not necessary and that the Cobb County Adult Detention Center under the Cobb County Sheriff’s Office would be used to house prisoners except for temporary holding.

“So what we did was we reallocated those monies (from operating the jail) to the operational side of the house,” he said.

He said that while the mission statement emphasizes respect for residents, the officers are still police, with a job to do.

“And our first job is to protect the citizens, of Austell, and make sure of your safety and your quality of life. And that means you see us out here on the street doing what we’re supposed to do,” he said.

He described new uniforms and equipment the department has acquired or has in the works, including new uniforms, body cams, and vehicles.

“Officers were driving around and 2010s with 2 or 300,000 miles on them,” he said. “That’s crazy. It’s crazy. So how can we expect our men to go out here and do their jobs when we’re not even given them the equipment?”

“And as I look back here, now to all of you, I see, you have a diverse community, we have a diverse department, we welcome even more diversity because that’s the only way that we want to bridge that gap,” she said. “But I truly believe that first, you have to start with your house.”

“So it gave me a good view of the importance of internal care,” Jones-Farrell said.

The evening came to a close with Captains Derek Horton of the Support Services Division and Jason Roberts of the Patrol Division, introducing members of their staff.