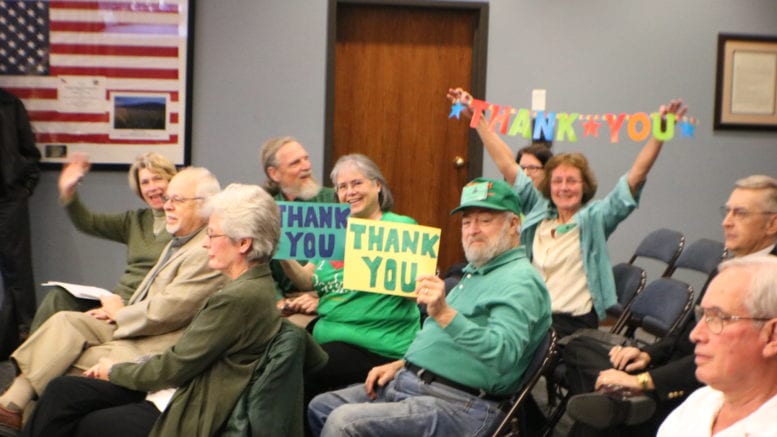 Supporters of new public parks for Cobb County silently celebrated by holding up “Thank You” signs, as the county commissioners voted unanimously to issue bonds for the acquisition of land for parks. In 2008 the Board of Commissioners had approved a resolution for $40 million in bonds, and the voters approved it in a referendum by a large margin, but the county put the plan on hold in the face of the recession and the drop in property values in 2009-2010. The county will now move forward by issuing bonds up to a total of $24,700,000, which is the maximum possible under the remaining schedule of the existing bond resolution. The county estimates that the bonds will create the need for a 0.13 percent increase in the millage rate to service the debt.

Chairman Michael Boyce said that while he supports the plan to issue the bonds, “I also think it’s important to realize why we cannot fund the full $40 million. Legally … given the current legislation we’re only allowed to ask for $24.7 million. So the other $15.3 million is where we have to find that, in order for me to do that, we’d have to go back for another referendum.”

He mentioned his objections during his campaign to the lack of a referendum on the SunTrust stadium deal, and said as a matter of principle this applies to the park bond as well.

After the vote supporters of the referendum assembled in the lobby of the commissioners board room.

Linda Bell, of the Cobb Parks Coalition, a group advocating for the creation of new parks, said, “I’m very  pleased to see some movement on this issue after so long.  We, as the Cobb Parks Coalition, have been working on this for a year and a half …  We’re not completely satisfied, because we want the entire $40 million that was voted on, and we’re hoping that that is somehow going to come to fruition.  But we are pleased to see this progress and are appreciative to the new administration.”

Jennifer Burke, also of the Cobb Parks Coalition said, “I think it’s a great first step.  The voters voted for $40 million, so we will still continue to work on getting the $40 million as voters approved.”