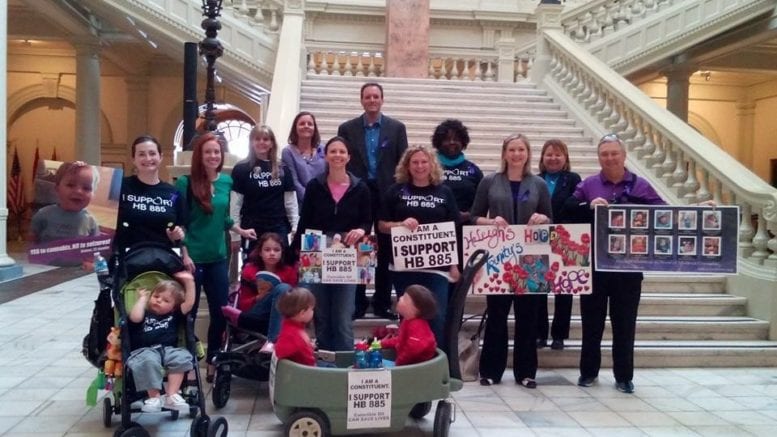 The path to Haleigh’s Hope Act, Georgia’s medical cannabis law, began in January 2014 when Representative Allen Peake received an email from a mom whose daughter was suffering life-threatening seizures. After meeting Haleigh Cox, along with her parents Janea and Brian, he decided to help. Parents and patients from all over Georgia, including Cobb County, joined the cause.

Just weeks before Janea sent that email, Aaron and Dawn Klepinger of Marietta, packed their belongings to move to Colorado where they could access cannabis oil for their son Hunter. Born in 2005, he began to have seizures at four months old. He had as many as 200 a day and EMS frequently responded to 911 calls from school. Pharmaceuticals did not help. After watching Sanjay Gupta’s CNN special “Weed” in 2013, they decided to put Hunter on the waitlist for Charlotte’s Web to see if he would benefit from cannabidiol (CBD) oil. They weren’t expecting a call until the following year, but it came in November 2013 and their holiday plans went out the window. The family of four, with Dawn pregnant, left extended family behind. They continued to pay the mortgage, along with their Colorado rent, in the hopes they would return.

Peake introduced the first bill, HB 885, in January 2014. Many parents and patients were at the Gold Dome several times a week meeting with legislators. Aaron Klepinger even flew in from Colorado to share the great results Hunter was experiencing. In-state cultivation was quickly stripped from the bill, and it made headlines when Senator Renee Unterman confessed to a reporter that she was holding it hostage in committee until her bills were considered. Now, with the bill just providing immunity for possession of the oil for people suffering seizures, Unterman attached her separate autism insurance mandate bill to HB 885. The bill died when the House wouldn’t pass the insurance portion, and the Senate wouldn’t pass it without it.

Meanwhile, in February 2014, former President Obama signed the Farm Bill of 2013. Section 7606 recognized the Cannabis sativa L plant, when the THC concentration is less than 0.3 percent, as hemp and distinct from marijuana. With this reclassification, authorized growers, operating in accordance with the bill, would be able to ship low-THC cannabis oil. Technically, the oil that helped Hunter could now be mailed to the Klepingers in Georgia and was considered to be in a legal gray area. However, concerns about lack of knowledge in the medical profession made them and many other families concerned about returning to states without any legal protection. What would happen if an unsupportive doctor or teacher reported families to the authorities? They remained in Colorado.

Even though low-THC oils could now be shipped, patients benefitting from products with higher amounts of THC still faced a dilemma. Not everyone responded to the CBD. Some patients improved when they added THC or used THCa as an alternative. Those still couldn’t be shipped, and crossing state lines with those products is a federal crime. Families reported being pulled over in Colorado’s neighboring states, and going through TSA was a nerve-wracking event.

In January 2015, Peake introduced HB 1. It covered several conditions, allowed for up to 5 percent THC, and included a plan for in-state growth. To the shock of the families, Governor Deal immediately made it clear that he would only sign the bill if cultivation was removed. The bill did pass, but it only provided immunity for certain conditions. If a person needed more than 0.3 percent THC, they would have to commit a federal crime to obtain it. The Klepingers were able to come home, but other families felt it would be too difficult to find what they needed. Janea Cox eventually returned home with Haleigh, but has to commit a crime every time she returns to Colorado to retrieve Haleigh’s medications since they contain too much THC to ship. At least the families now had low-THC oil registry cards which provided legal protection and allowed the oil to be administered in a hospital setting. Children’s Healthcare of Atlanta does not permit the oil on the premises without it.

Ever persistent, Peake returned in 2016 with HB 722. It added autism, PTSD, and others as protected conditions and tackled the growing issue. Again, Deal put his foot down on cultivation. The bill eventually became SB 145 and could have expanded protected conditions but died in the Senate.

The failure of HB 722/SB145 to pass was a huge letdown for Brian Underwood of Marietta. His young son Reid lives with a rare condition called epidermolysis bullosa (EB) which causes his skin to blister and tear painfully. This bill would have added his condition to the protected list. 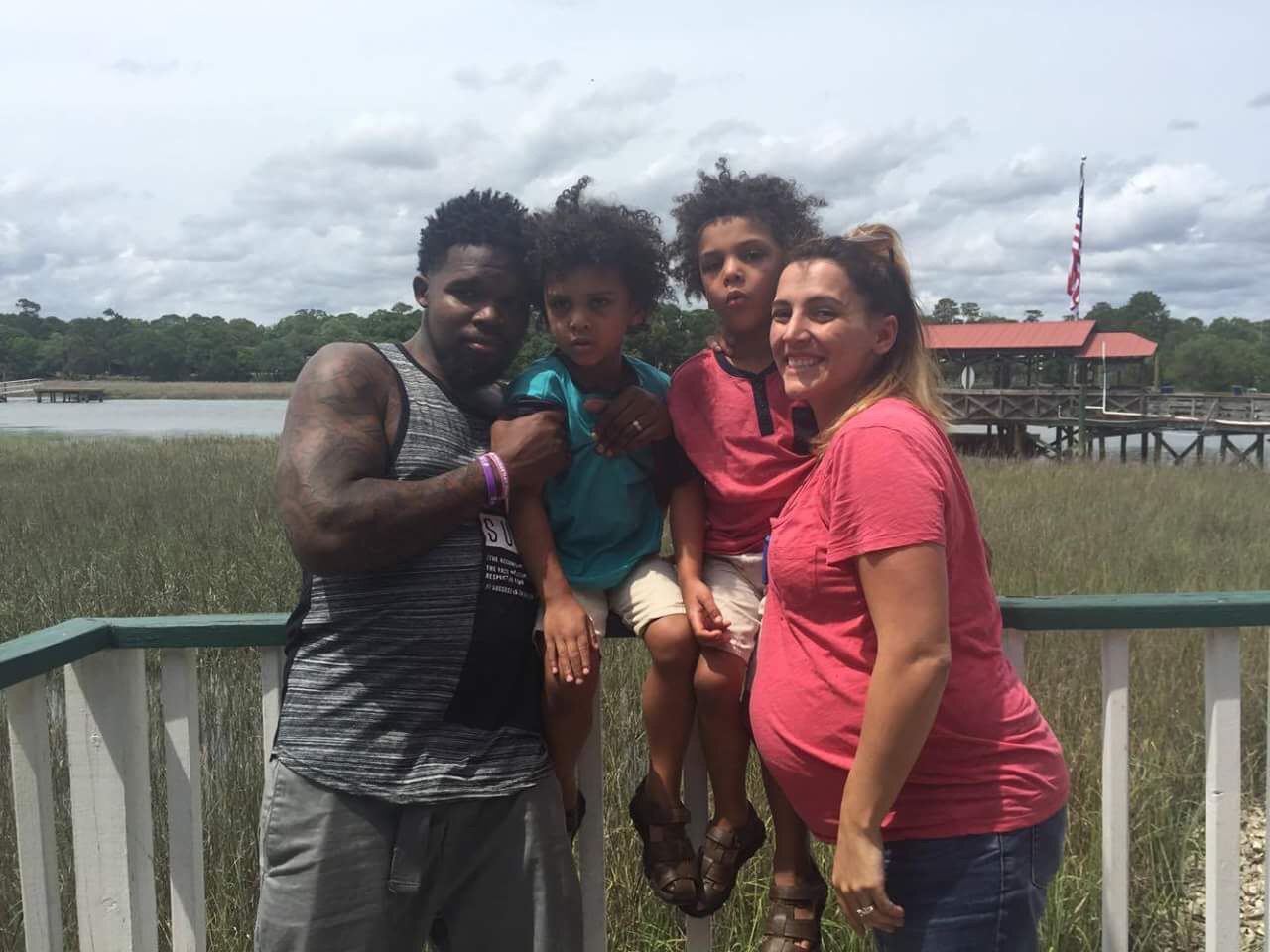 The Gayle family — photo used by permission of the Gayles

Sydney Gayle lives in Kennesaw with twin boys who have Dravet Syndrome and started seizing at six months old. Apollo has been seizure free on cannabis for seven months and Ares for four. She doesn’t worry about accessing the low-THC oil, which she orders from South Carolina, but they supplement with THC and THCa from Colorado. Currently, she has a friend in Georgia who obtains it for her, but she worries about long-term access without in-state cultivation which would allow her to obtain it legally here on her own. She is frustrated that some legislators don’t recognize the need.

“I have never heard of one person saying they don’t want my kids to have medicine,” said Gayle. “Everyone wants for our family to be stressed less and have access. So why do our representatives not want to take the time to develop a program to be proud of?”

In January 2017, Peake introduced HB 65. This time he focused on adding more conditions as it was clear Deal would not sign anything with growing. Senator Ben Watson also sponsored SB 1, a bill that only added one condition, autism, and also cut the allowable amount of THC down to 3 percent. The 5 percent THC was non-negotiable for Peake and the families. Eventually, SB 1 was passed with HB 65 language substituted, but not before the Senate removed PTSD and other conditions and added qualifying language like “severe” and “end stage.”

“I was disappointed when in-state cultivation was shot down and basically not even discussed last session,” said Underwood. “It would be such a benefit to all who need it and it just appears that the legislators are not taking their constituents views into account. It definitely affects us as we are still forced to find oil other ways, which puts us in a legal bind.  We have networked with several sources of oil in and outside of the state.” However, Reid’s EB was finally recognized as a protected condition.

Shannon Cloud of Smyrna is active in the push for legislation because her daughter Alaina also has Dravet. She expects the focus in the 2018 legislative session to be on putting an amendment on the ballot so voters can decide. Deal will also leave office next year, opening the seat for someone the families hope will be supportive of their efforts.