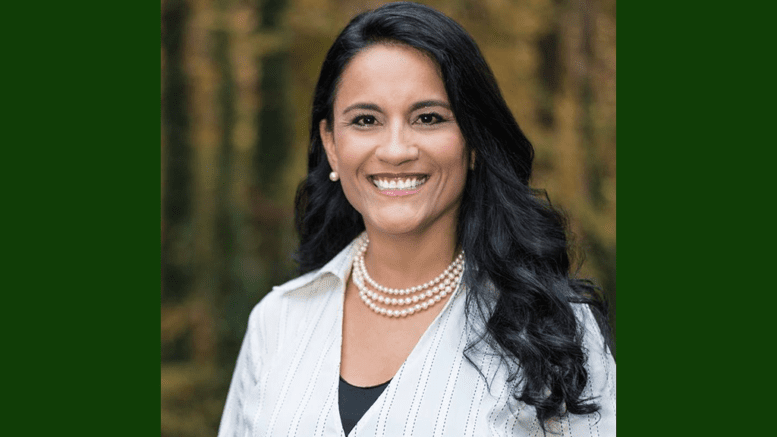 Karín Sandiford has four reasons to run for House District 46: Her four children. The Brazil-born transplant immigrated to America at age 11, and family and politics are the core of who she is. Sandiford has five pillars to her campaign: education, expansion of Medicaid, quality of life, jobs, and gun reform.

“I started seeing how the atmosphere was turning very negative and divisive,” Sandiford said. “Most importantly very distracted from things that matter to the everyday family at the dinner table. We need strong leaders that are going to remain focused on what families need at the local level. Not leaders that are going to get caught up with the drama of the national level or extreme views. That’s what inspired me to make the time and effort to run.”

Sandiford believes making technical colleges free and affordable for families should be a top priority. This means tuition-free college for Georgia residents.

‘I own my technology consultancy and what I’m seeing in my industry is a lack of skill set for the jobs of the future, which are a lot of technology jobs,” she says. “Our children and families deserve affordable options and our community technical college in Georgia can provide that.”

Additionally, she seeks to increase funding to public schools, where over 94 percent of Georgia’s children are attending.

Families USA reports 33 states that have expanded Medicaid across the nation, 50 percent of which were non-democratic governors. The central goal of the Affordable Care Act, better known as the ACA, is to “significantly reduce the number of uninsured by providing a continuum of affordable coverage options through Medicaid and the Health Insurance Marketplaces.”

“This is not a partisan thing, it’s a numbers and business thing,” Sandiford said. “Our federal taxes literally go to the governor every single year. When we opt out of Medicaid, which we have every single year, we’re basically saying to the government ‘take my taxes and give them to another state.’”

The ACA expands Medicaid coverage for most low-income adults to 138% of the federal poverty level. Following the June 2012 Supreme Court decision, it’s up to the states to decide whether to adopt Medicaid expansion or not.

To Sandiford, the bigger issue is moral.

“Having families go to the doctor without it financially impacting them,” she says. “I’m a huge proponent for expansion of Medicaid, with some protections needed for subsidies.”

Sandiford says she is aware of the public transit proposals in metro Atlanta but believes there is a more immediate solution.

“One bill in the legislative house in 2019, which would provide tax incentives to companies with telecommuting and work-from-home programs,” she said. “Immediately, we have less cars on the road.”

To Sandiford, this is the way of the future, a way to ensure better lifestyles for families, and a quick fix to traffic.

“In my business experience, I have deployed in three different companies these telecommuting programs and every single time we have see productivity and employee moral shoot up 25 percent from where it was,” Sandiford says. “It’s an easy solution that provides a positive impact to our families immediately.”

House District 46 has a high median income, which can be viewed broken down by household income here.  But Sandiford says the county has been hit with a lot of layoffs.

“When you have people that were once senior managers that were laid off and now looking for new jobs, they are overqualified in terms of pay. I want to bring in the pay inquiry law,” she said.

This law would prevent companies from inquiring about job applicant pay history, and in turn, rooting out pay inequalities.

“If they are qualified and able to do the job, you pay them for what you budgeted for the job,” Sandiford says. “That protects opportunities for situations like layoffs, but for women, minorities, with any pay equality gap that could potentially exist there.”

Thus far in 2018, 23 states have introduced pay equality legislation. Sandiford believes this and the work-from-home program bill could — and should — be put on the house in 2019 to become law in next year.

As a mother, Sandiford holds gun reform close to her heart. While she expresses support for the Second Amendment, she believes that for us to responsibly protect the lives of people we need gun reform.

“I have a right to live, and we all need to be responsible for that,” Sandiford said. “I want to repeal campus carry. It’s counterproductive to what we’re trying to do.”

“If we’re saying no guns are allowed in [the Georgia State Capitol] where it’s only adults that work there in the legislature, government offices, etc. — with security guards — then why are we okay with allowing guns on places where our children are?” she said.

Sandiford: said, “My entire campaign is focused on moving people forward together”

Sandiford says throughout her career she built a reputation of being the go-to person in times of crisis because she can bring people together to focus on solutions.

“This isn’t just a nice slogan, it’s the fiber of who I am,” she said. “Solutions come when we have diversity in people and diversity in thought. That’s when we look at different ways of solving problems.”

To her, being a representative means listening to all the different ideas, whether you agree not, and finding the areas to come together and move forward.

Separation of church and state

Sandiford’s Christian values lie deep within her personal life, and she believes in the separation of church and state. As the daughter of a Christian missionary, she says her relationship with Christ is a core value.

“Christianity and my relationship with Jesus Christ is the driving force of who I am,” she says. “Because of that, it is so important to me to protect freedom of religion and freedom of speech so that I have the right to practice what I want. It is important for me, as a Christian, to understand the separation of church and state.”

She says Christianity does not dictate her legislative decisions.

“Our founders did not want anyone else to experience persecution of religion that they experienced.,” Sandiford said. “They wanted people to truly have freedom. It’s okay to be different, and let’s talk about those differences, and let’s focus on the similarities, and keep moving forward.”

Sandiford, 47, was born in Brazil and raised in Peru, where her parents were missionaries in the Amazon. In 1982, her family immigrated to Lincoln, Nebraska. She earned two degrees from the University of Tennessee at Chattanooga, one in business economics and the other in philosophy, as well as taking two years of mechanical engineering courses. She also holds an executive MBA from Emory University.

Solution to dilapidated Sprayberry Crossing shopping center may be closer

Be the first to comment on "Karin Sandiford supports Medicaid expansion, gun reform"