Marietta Square’s first craft beer brewing facility opened its doors to the public on Thursday, September 6, with an open house and party showcasing its event spaces and initial line of core beers.  Named after the green space in the center of Marietta Square, Glover Park Brewery is located at 65 Atlanta St. at the intersection with Waverly Way, in a building that dates back to the 1930s and was formerly occupied by Marietta Lighting company. Co-founders and long-time Marietta residents Sam Rambo and Hank DuPre want their new brewery to be a small place in the neighborhood for people to get together with friends and family to hang out, watch sports and enjoy their fresh beer brewed on site. “We’re trying to bring that small town feel back to the city,” DuPre said. “People moved away because their entertainment was in Atlanta or elsewhere. We’re hoping to be part of a new wave of attractions in our city.”

The building came close to burning down in November of 2001 when a basement electrical short started a fire that charred the brick walls. Rambo and DuPre refurbished the building earlier this year with an upstairs event space and a downstairs taproom layout set up for entertainment, with comfortable bar seating, large television screens, and games. Brewing machinery is visible on one side of the taproom, and the spacious and dog-friendly beer garden in the back offers a space for additional seating and food trucks. Some parking is available at the brewery, and a large public lot is right across the street.

DuPre and Rambo have no prior experience in brewing beer, other than drinking a lot of it, but as savvy businessmen,\\\\ they felt the need to jump into the booming industry after the passing of Senate Bill 85 last year. They brought in SweetWater Brewing Company co-founder and former brewmaster Kevin McNerney, currently brewmaster of 5 Seasons Brewing as well as Glover Park Brewery, to craft the initial list of six core beers. 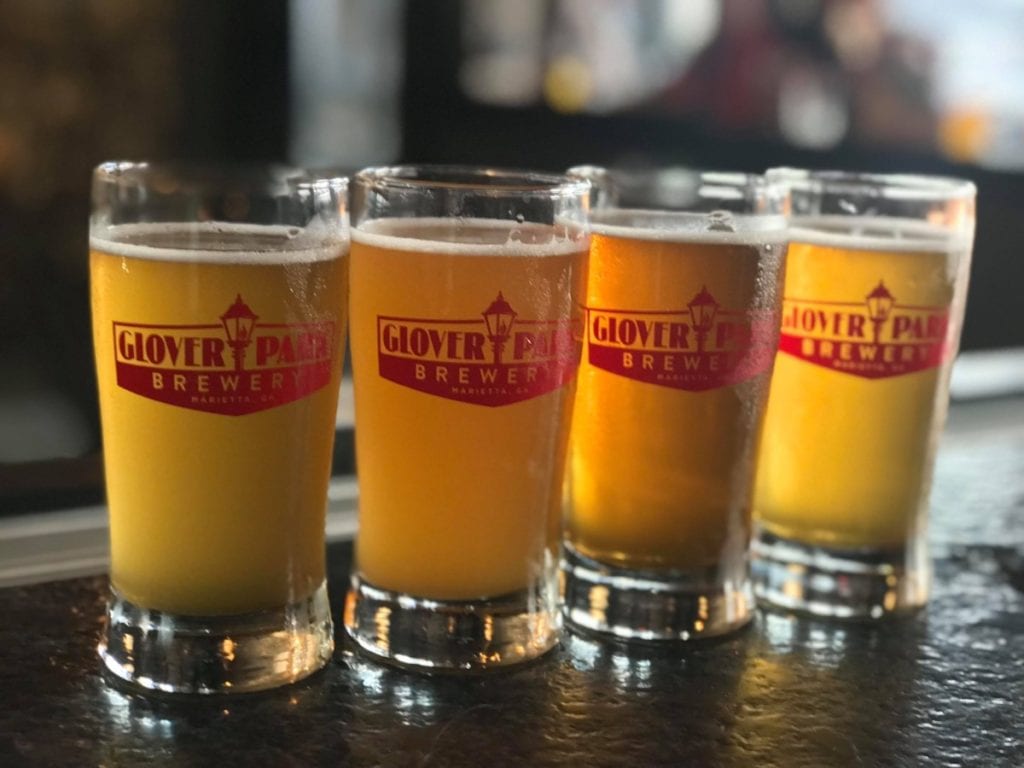 “Some Beach is my favorite,” Rambo said. “We plan to have a busy brew week coming up with more varieties, including a stout. We plan to continue our current six beers while adding to that lineup as we move toward 12 varieties on tap this Fall.”

Marietta Square has long been the site of large-scale events and festivals like the annual Fourth of July Celebration and monthly local artist markets. DuPre and Rambo said that there is already a lot of interest in the brewery as a venue for special events and weddings, with capacity for up to 300 guests. Their rental fee includes set-up, event time, breakdown, cleanup and use of all tables and chairs.

“We are filling our calendar with something exciting every week,” Rambo said. “Lots of fun stuff coming up with Chalktoberfest, Halloween contests, Gobble Jog, cornhole tournaments, live music and lots more to come. We have some great food trucks lined up every week, and they have been receiving great reviews.”

Like many professional breweries in Cobb County, Glover Park’s taproom will be closed Mondays and Tuesdays, but will open a 4 p.m. on weekdays, 11 a.m. on Saturdays and 12:30 p.m. on Sundays. It will close at 10 p.m. on Wednesdays and Thursdays, 11 p.m. on Fridays and Saturdays, and 7 p.m. on Sundays.

Later this month on September 21, The Steven Brooks band will perform at the brewery. No one in the band is actually named Steven Brooks, but Brent Headley and Brandon Holland will play covers and original songs in the blues, rock and reggae genres to keep Glover Park Brewery’s opening month party going.