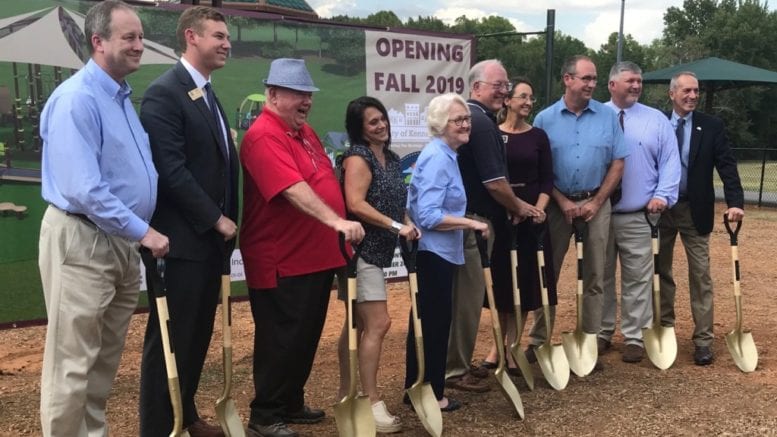 The City of Kennesaw broke ground on a new inclusive playground at Swift-Cantrell Park Thursday, a project Parks Director Steve Roberts called “a collaboration between a city and its citizens.”

The new playground will add about 5,000 square feet to the existing playground of 13,500 square feet, and the pavilion will be relocated. In order to make the playground accessible to all children, wood chips will be removed in favor of astroturf, and the main structure will have wheelchair accessible ramps and 40 feet of shade. There will also be a sensory play center, eight person wheelchair Sway Fun, loft with 20 interactive developmental activities, tunnel system, rope towers and a slide.

“Eight months from concept to shovels in the dirt. That’s absolutely fabulous and that’s what happens when the foundation, your council, your community gets together,” council member James “Doc” Eaton told the audience.

Ann Pratt, a Kennesaw citizen, approached council member Pat Ferris in 2017 when he was running for office to get him on board with her idea of creating a play area for all children.

Their conversation, which started with a simple idea for swings, led to the creation of a committee, which included Pratt and several members from the Swift-Cantrell Foundation.

After months of work researching options and weighing six proposals for the playground, ranging in cost from $394,00 to $494,000, they selected Playground Creations and the City Council approved the contract. The bid was $449,993.25 and will be paid for with funds from the 2016 SPLOST.

“Look at what we can achieve when we do it together,” said Mayor Derek Easterling. “This is just the beginning. Imagine where we can go from here.”

The playground is expected to be completed in 12-14 weeks.

A Disabled Activist Speaks Out About Feeling ‘Disposable’