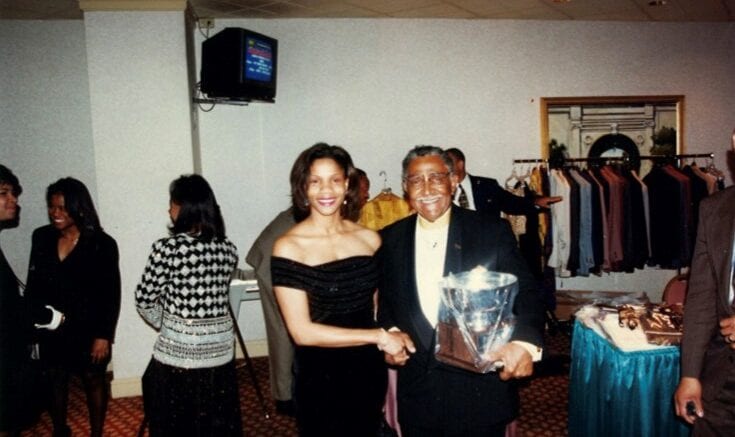 [This is a guest opinion by Shelia Edwards. She is a resident of Mableton, and is a candidate for the District 4 seat on the Cobb Board of Commissioners.]

I heard about the passing of Dr. Joseph Lowery and it left me with a great sense of sadness – as we have lost yet another civil rights champion.

As I went about the day, my sadness would be replaced by a sense of gratitude for the generosity of this gentle giant and the place he holds in our hearts and minds.

When most people hear the word generosity, they associate it with money. For Dr. Lowery, his generosity emanated from his human spirit which radiated kindness, love, charity, and dedication.

Everyone knows Dr. Lowery’s dedication to the cause, having founded the Southern Christian Leadership Conference (SCLC) with Dr. Martin Luther King, Jr. decades ago.

We also know his history and have witnessed Dr. Lowery at work, championing issue after issue. Some of us have even been lucky enough to have spent time in his presence.

If you were ever blessed to be in his space for any amount of time, you were the recipient of something special, something great, something that only Dr. Lowery could bestow upon you…his unabashed wisdom and stirring life lessons.

I am happy to say that I am one of those fortunate recipients and I cherish the opportunities I was afforded to share the same space with this generous giant.

Years ago, I was part of the dais at the National Conference of Black Mayors Conference in St Louis, where Dr. Lowery was being honored.

As we later gathered for a group photo, I got the chance to congratulate Dr. Lowery for his latest recognition. As he accepted my words of praise, I remember the twinkle in his eyes and the giggling in his voice as he offered me up a folksy story.

Dr. Lowery talked about the award he had received that evening, along with numerous other awards and recognitions that had been bestowed upon him through the years.

What is most important, he would say to me, was the work that you do for the people around you and that taking care of others was the greatest award he could ever receive in life. I eagerly accepted those words of wisdom and made them part of my life.

As we celebrate the life of Dr. Lowery, many may offer their own memories and recollections of him generously sharing his legendary stories with them.

I was the lucky one that day and would later tell my children and family of the experience of being in the presence of this extraordinary icon.

Years later, I would join Dr Lowery and nearly two million other Americans on the National Mall in Washington as the first African American President, Barack Obama, was sworn into office.

Although it was one of the coldest days on record, the warmth from the speeches of people like Dr. Maya Angelou, Dr. Joseph Lowery, and others left those in attendance empowered and grateful to be in that space.

As the day proceeded and the thought of being cold melted away, discomfort from the weather was replaced with the undeniable reality that we were witnessing history. The camaraderie that day of the people in attendance, along with the stirring comments from Dr. Lowery and others like him, left us feeling energized, alive, and “warmed up”.

Again, a generous giant was at work.

A few years ago, I traveled with a friend, John Funny, to Huntsville, Alabama to attend the street naming for Dr. Lowery.

John was the President of the Atlanta Chapter of Alpha Phi Alpha and was planning to present his fraternity brother, Dr. Lowery, an award. It was a hot summer day as hundreds gathered to honor Dr. Lowery. In attendance were young and old, black and white, and everyone in between who had come together to celebrate the moment.

Dr. Lowery arrived with his daughters and in his usual style and grace, he greeted the crowd with a folksy story that was both comical and whimsical, before he began sharing with us his memories of growing up in Huntsville.

His generosity was on full display as Dr. Lowery talked about his childhood, his family and his friends. He shared life lessons he had learned along the way, some that were easy and some that were not so easy.

By the time he was through, it was as if you had grown up in Huntsville with him. Dr Lowery always knew how to make you feel like you were an intricate part of his story. I was glad to attend this special event as it allowed me to receive more time with this titan and more life lessons.

I did not know it at the time of our first meeting, but I was being presented a gift – a giant’s generosity. It is something that I have held on to through the years and will forever cherish and hold dear.

It is the words of Dr. Lowery, and others like him, that I have held on to as I work in my community on behalf of others.

With a heavy heart, I went to my basement to look through old photos and came across the ones with Dr. Lowery from a few decades ago from the Mayor’s Conference.

I smiled as I looked at the photos and was instantly transformed back to that moment of hearing his baritone voice as he shared with me that lesson.

That smile is still on my face as I share my memories with you now.

The words Dr. Lowery shared with me during that first meeting have remained a part of me. It is not the recognition that is important, it is the work that you are willing to do for others that truly matters.