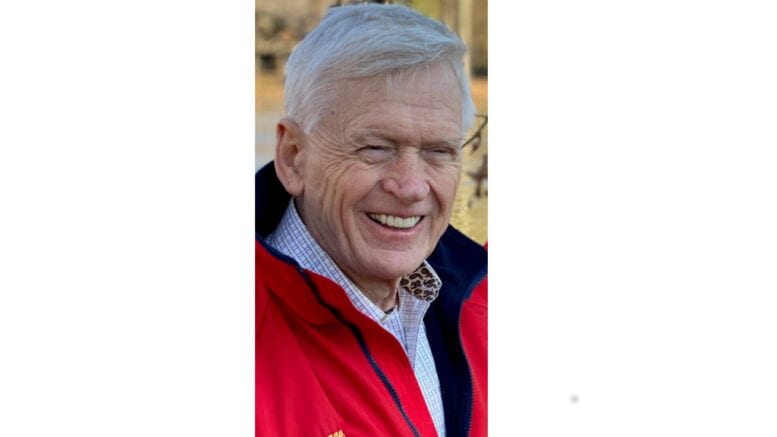 Larry Savage is running in the Republican primary for the chairmanship of the Cobb County Board of Commissioners, hoping to unseat incumbent Chairman Mike Boyce for the GOP nomination.

The Courier had a phone conversation with Savage, and asked him to start by telling a little about his background.

“All that adds up to a compelling environment for me, and I made a specific choice,” said Savage. “I was living in South DeKalb at the time, and actually looked around. A lot of my peers from the time I grew up had moved out to Gwinnett County, but I decided to move to Cobb because it seemed like a better fit and I believe that proved to be the case.”

“After high school I got a degree in mechanical engineering,” he said. “And then while working full time, I went to school at Georgia State at night and acquired an MBA, (a) master’s degree in business administration.”

“I worked for about 15 years for General Motors at the car and truck assembly plant on the south side of Atlanta. I left there, voluntarily I might add, and I left there to start a new business as a distributor of industrial tool products,” he said.

“After a while,” he said. “I had a fractured partnership situation and ended up selling out of that business and subsequently went to work for Loctite Corporation in Newington, Connecticut.”

“I thought it was going to be for a couple of years initially, but it turned out to be more than 20 years,” he said. “And I was in sales and sales management with Loctite until my early retirement in 2001.”

“And that’s really sort of the beginning of when I started to pay more attention to local government when I had a little bit more time. I followed local government mainly through media reports for a few years before I really started to dig into it more thoroughly,” he said.

Savage had previous campaigns for BOC chair, including the election in which current Chairman Michael Boyce unseated the late Tim Lee.

He said, “Yeah, I have run for it and and without success. But this time is different.”

“I had not intended to be involved in it. I was essentially through as far as I was concerned,” said Savage.

“I was still following county government in the media and I’d occasionally read agendas or something of that nature,” he said. “But people started to ask me about running again.”

“I put it off as long as I could. I was waiting to see if somebody else would enter it because things were not looking really good for the county government,” he said. “I thought surely somebody else would come along and get into it … that I could get behind and support.”

“That just never happened and in December, finally, I actually made a decision,” he said.

“I think a lot of people shared my concerns that we really weren’t on the right track in Cobb County government and we were failing miserably in terms of our historical preference for conservative, small government, low taxes and that sort of thing,” Savage said.

The Courier asked Savage about criticisms he had raised of the use of the Special Purpose Local Option Sales Tax by the county.

He said, “You know, I can put that in very simple terms. All I really am looking for on SPLOST is that they follow the law.”

“With each new SPLOST they slide further and further away, and it’s not what it was intended to be,” he said.

“It’s not managed the way it’s supposed to be. And it is just literally $140 million a year that just sort of slips away,” he said. “And yeah, there are some things that get done that I can see, but I’m not seeing where we’re getting our money’s worth.”

“I’m not seeing where the money’s being put to best use for the benefit of the majority of the taxpayers. And quite frankly, just let me say it, I can’t see it at all. The followup. the oversight, the reporting …”

“So, you know, all I really ask is that they read the law, run it according to in strict compliance with the law, and that will clear up a lot of my objections,” Savage said.

“Well, I’ve got one serious bone to pick with the whole process,” Savage said.

“You know … the land use map is widely perceived as the cornerstone for land use planning,” he said. “But it isn’t.”

“And at the end of the year, at a commission meeting, they will have one motion to modify the land use plan to incorporate all the zoning decisions that have been made through the year that conflicted with it,” said Savage.

“That’s not how that ought to be done,” he said.

He said, “I’ve heard people say, ‘well, the land use plan is not actually a requirement in zoning. We only do that because it’s required by the state’.”

“And I’m thinking if we’ve got a land use plan … it makes sense to follow the land use plan instead of this business of basically disregarding it,” he said. “And cleaning up the mess … every year strikes me as not really representative of how the zoning process and land use management process ought to work.”

He said, “As far as I’m concerned, if they want to change the land use plan today in order to do a zoning change tomorrow, that might be okay … They would have to make a vote that recognizes publicly that we are changing land use plan for this zoning case … instead of the thing they do now, which is pretending the land use plan doesn’t even exist until the end of the year and then changing everything at one time.”

“It’s almost it’s almost an insult a logic to do it that way,” he said.

“It’s not that it’s the first thing I’d do, but I think we have gotten to a point where we are too heavily invested in rental apartments,” he said. “And for a couple of reasons.”

“One is rental apartments are occupied by people who don’t necessarily have the same roots in the community as homeowners,” he said. “And I think we need to take note of that.”

“You you can’t add … hundreds of people in a square block and not expect it to have an impact on traffic. It does and and we all pay the price,” said Savage.

Taxes and the millage rate increase

“And for all our companion governments around the cities (and) neighboring counties, that’s been good enough … that’s automatic increase in revenue for the county government,” he said. “But in Cobb County we got that, and we also then tacked on a 25 percent increase in the millage rate, and that hit everybody.”

“But every other piece of property in the county is affected when the value goes up,” he said. “But when the millage rate goes up, that hit’s everybody.”

“I had a message yesterday from a woman whose retirement is based upon owning three rental houses. And she’s had tenants in her houses, they’re not lavish houses,” said Savage. “They’re houses that are priced and affordable for working people who can’t really take a rent increase. And she’s tried to not increase their rent but her tax bill (went) up 25 percent.”

Savage said, “And she’s saying to me, ‘How can I deal with this? I can’t. I got tenants that can’t take a rental increase … but I’m getting to the point where, the money that’s left over after all my expenses are met, including the tax bill, is no longer covering my retirement needs’.”

Asked about transportation policy, Savage said, “Transportation has been a mess here for the last few years because we’ve had a lot of forces in play that have been really pushing pretty hard for public transportation systems.”

“But I think that has actually hindered our effectiveness in dealing with everyday traffic issues that we have that we could have dealt with better,” he said. “We spent a lot of money on transportation projects in the SPLOST, And I don’t think we got all the bang for the buck we could have gotten if we’d had an unrelenting focus on getting people to work on time.”

“Chairman Boyce got behind the idea that police pay needed to be increased, and the way he went about it, he really put the other commissioners in a box where they could either agree with him or invoke the wrath of all the public Safety employees for not agreeing with him. So, in effect, I think they’ve had … six salary actions targeted toward public safety people,” Savage said.

“And when they started out it was all about police and police retention. Well, as soon as there was money on the table, it was about police and firemen and sheriff’s deputies, and investigators in the DA’s office,” he said. “So instead of giving salary increases to roughly 600 people, it turned out to be almost 2000 people. And they didn’t say, well, geez, we got x dollars and if we’re going to give it to 2000 instead of 600, your increase individually won’t be as big. That’s not what they did. They said okay, we’ll give everybody the same increase. Now that was that’s a pretty callous way to go about doing it,” he said.

“It’s not exactly what you’d call thoughtful management of resources.”

He said when the discussion of pay increases began it was about retention of police officers, but when the International Association of Chiefs of Police study of the Cobb County Police Department was done, the group could not determine why Cobb was losing officers because of the lack of exit interviews.

The Courier asked Savage to tell its readers why they should vote for him.

He said, “My entire adult life has been in the world of technical issues and management issues. And we’ve got both in Cobb County.”

“The county’s government has become large enough and complex enough that it’s not just a matter of whimsy to to try to look at the management of it or try to think about how to run it better,” he said. “There are a lot of technical matters involved and a lot of the decision-making involved is technical.”

“And I have hands-on experience with that sort of thing … years and years, creating budgets, living with budgets, managing budgets and meeting my goals. Meeting my goals is critical because people in government don’t always worry about meeting their goals,” he said.

For more information on the Larry Savage campaign visit his website at https://www.savageforchairman.org/

The General Primary and Nonpartisan Election is scheduled for May 19, but given the COVID-19 pandemic you should check the Cobb County election calendar periodically to see if the date has been changed.

Northpoint Ministries mixed-use development approved by Cobb Board of Commissioners