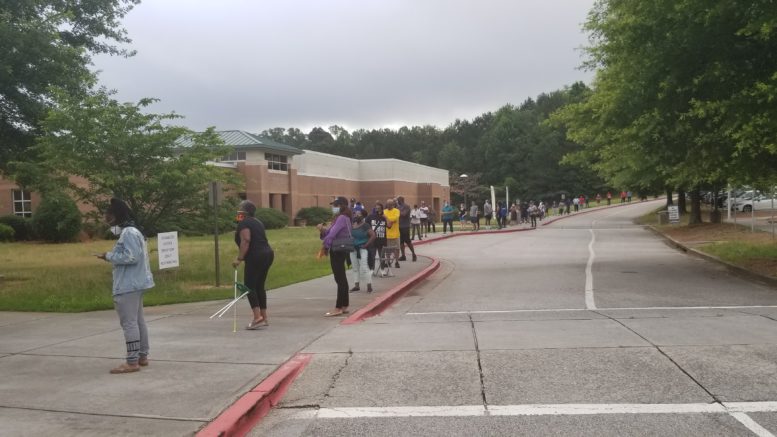 Lindley Middle School in Mableton has been my voting site for well over a decade, and never have I had to stand in line, even during the 2016 election.

Lindley is a South Cobb voting site, and its precinct, Lindley01 (click here to view the map), covers the portion of Mableton roughly bordered by Veterans Memorial Highway on the south, Cooper Lake Road on the west, Pebblebrook and other roads on the north, and unincorporated Cobb at the Chattahoochee River, broken into pieces by Smyrna’s jagged quiltwork of annexations.

Usually I walk through the door, sit at the table immediately to the left of the door, and fill out the little card the poll worker distributes, walk to a table further into the building, a poll worker verifies my identity, I vote and I’m gone.

This year I filled out an absentee ballot and dropped it off at the South Cobb Government Center over the weekend.

But since I saw so many photos on social media of long lines at precincts across metro Atlanta I decided to go to Lindley and see if there was a line.

And yes there was. The line extended from the doorway, past the length of the building.

I arrived at about 8 a.m., and I asked a few people who were about twenty people out from the doorway how long they’d been waiting. They said about an hour,

Below are the photos I took of the lines.

Here’s where this From the Editor column morphs into an opinion piece.

This is a totally unacceptable way of organizing an election, and it can only partly be attributed to COVID-19 social distancing requirements.

The right to vote implies that people have the ability to vote conveniently, and not everyone can take hours off on a work day to stand in line.

I can’t claim to know the reforms needed to stop elections from becoming a national nightmare and embarrassment, but a first step would probably be a combination of more polling stations and continued access to mail-in, and possibly online voting.

Disenfranchisement of Cobb County voters shot down by election board