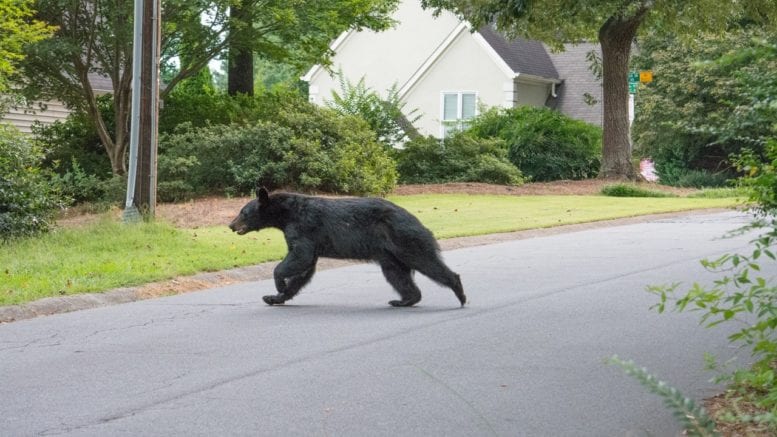 Bear that wandered into Laurel Park, --- photo by local resident, provided by Marietta Police Department and used with permission

If you’ve ever visited Laurel Park, you’ve no doubt visited the small lakes, where you can see ducks, turtles, geese and other common visitors to lakes and shores.

But in a park close to busy Whitlock Avenue, park-goers are much less accustomed to seeing bears lumbering around.

As most of metro Atlanta is now aware, a roughly 300 pound adult male black bear decided to visit Marietta yesterday.  Calls to 911 operators began just before 9:00 AM yesterday and continued throughout the day.

The big boy paid a visit to Laurel Park off Manning Road before migrating to multiple neighborhoods in the surrounding area.  National Park Service (NPS) Chief Ranger Anthony Winegar joined MPD Major Brian Marshall in monitoring the bears movements though out the day.  Department of Natural Resources (DNR) was contacted early in the day and advised that the heat would cause additional stress to the bear if they attempted to immobilize it chemically (a.k.a. “tranquilize”).

The hope was that the bear would return to the woods in the nearby National Park on its own.  By early evening it became obvious the bear was quite content with its new home and was in no hurry to leave.  Once the sun set and temperatures cooled, the DNR, NPD and MPD came up with a plan.  Trained certified personnel from DNR safely chemically immobilized the bear around 10:15 PM near 175 Kimberly Way.

DNR transported the bear to monitor its health and we are happy to report he is now awake, healthy and recovering from the chemical immobilization.

DNR stated they plan to release him in a natural habitat outside Cobb County at an undisclosed location in North Georgia.  We have also been asked if it will be tagged or chipped, and DNR stated that is not necessary as he did not attack anyone or show any signs of aggression.  We want to thank everyone involved in this process.  Federal, State and local authorities all worked together with Marietta residents to safely relocate this large bear.