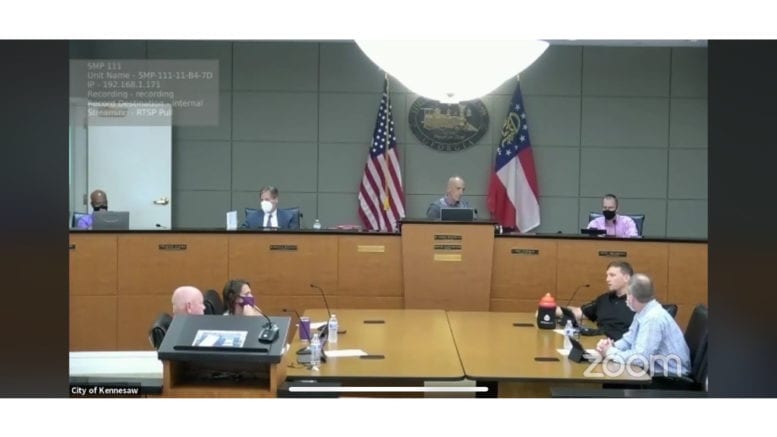 Eastpark Village is a 55-acre mixed-use development that includes residential, commercial, and retail components, as well as restaurants and a park. According to Howie, the project is progressing, but the senior living portion of the six-district project has been adversely affected by the COVID-19 pandemic due to the difficulty of finding lenders in the current climate.

The commercial component is underway, with the building of the storage facility on McCollum Parkway. Howie reported that they have secured a national grocery chain for the corner of Cherokee Street and McCollum Parkway. Sanctuary has also submitted plans to the public works department for the redesign of the Cherokee Street corridor from McCollum to Maple Drive. Construction could go out for bid within the next couple of months. The plan calls for the widening of the road and the adding of turn lanes and turn signals.

The Schoolhouse Village project is on hold until the lending environment changes for mixed-use properties, Howie informed council members. Intended to be a central gathering spot in downtown Kennesaw, it is part of the entertainment district and will have restaurants, an outdoor concert space, retail, offices and residential.

“The COVID environment has decimated all lending for mixed-use projects that have restaurants and retail,” he said. “In the meantime, we are simply maintaining the property.”

Though he has business owners ready to sign leases, without financial backing, the project cannot move forward. Howie said he hoped to be back in business by the end of the year or early 2021 if the situation improves.

The Old Cherokee Project at 2895 and 3007 Cherokee St., which was originally approved in 2018, was already downsized from 71 residential units to 45 and apartments were eliminated from the plans in August. Sanctuary also scrapped plans to relocate the historic homes on the property and will instead incorporate them into the commercial part of the plan. The project has been officially renamed Gault Commons in honor of the two Gault family homes dating back to 1864 and 1890.

Howie said Sanctuary has completed all the architecturals for Gault Commons and will submit for review by the Historic Preservation Committee. The engineering for the site is at the halfway point, and if all goes as planned, work will start by November 1.

Kemp at Jim Miller Park: vaccination delays due to lack of supply