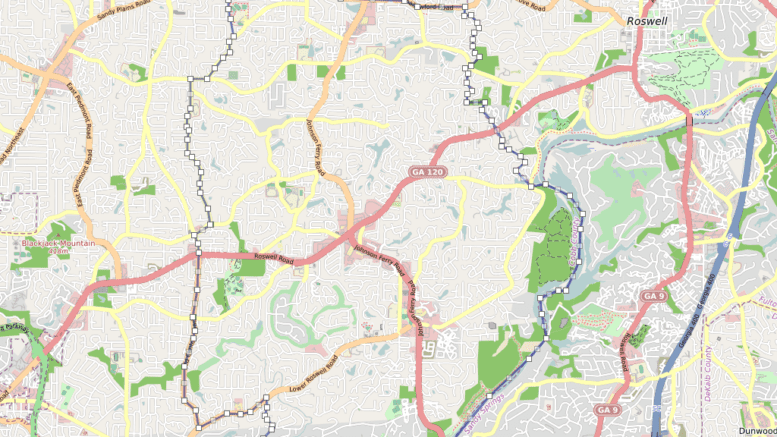 The coalition that led the opposition to the failed first-round East Cobb Cityhood drive is weighing in on the renewed effort-and they don’t seem like it one bit better than the last time.

State Rep. Matt Dollar filed a cityhood bill early last week along with fellow East Cobb Republican Sharon Cooper  just before the end  of the 2021 Georgia General Assembly session, starting the clock on what could be a two-year process.

The previous pro-incorporation effort fell apart at the end of 2019 but proponents had vowed to return.

The potential city’s 2.0 version   would have a smaller physical footprint than its previous iteration, providing for an incorporated community which could containof some 50-60 thousand residents. If the proposal were to win statewide legislative approval next year, voters would weigh in on the idea in a November 2022 referendum. If approval is given, the new city would be organized in early 2023.

The smaller footprint notion also extends to the services the potential city would provide this time, with a focus on code enforcement, parks and recreation and planning and zoning. Functions such as police and fire services would be left to Cobb County. It’s similar  to a number of other so-called “cityhood light” proposals that have sprung up in Cobb and elsewhere., including for the proposed City of Lost Mountain in West Cobb.

The new city would be divided into three districts, with two city council posts apportioned to each district. Council members would choose a a mayor and and mayor pro-tem.  Half the initial council would serve two terms and the remainder four, setting up a staggered election system.

The plan also provides for appointment of a city manager, clerk and attorney. Property taxes would be capped at one mill but the city could garner additional revenue through business and occupation taxes, licenses and permits..

Proponents are showcasing the revised and scaled-down proposal as a matter of  preservation and self-determination.

“I think that people have the right to decide,” said Dollar in an email. “If those living in Marietta, Austell, Kennesaw, Acworth, and Powder Springs have that level of local control over their local community, there is the belief that people in this community should have the right to it as well-or at least have the ability to decide if they want it for themselves-to have a referendum.”

The East Cobb proponents also said the area is at risk of over-development, which they said has happened in neighboring communities.,

Dollar  also said he sees much more support for the proposal than was in evidence two years ago. He said the new proposed map, roster of proposed services and structure is based on community input over the past few years.

“I have not heard a resounding desire from the community” for a new city, Seger said. “It still seems to be a situation where there is an awful lot of work going on that is not from public input where everyone has an opportunity.”

“A lot of the feedback that we have gotten is that people simply don’t want this.”.

Seger said the proposal is seen by many as a bid to create an unnecessary layer of government. A statement on the group’s website this week contends that the proposed menu of civic responsibilities is already being provided by the county “at a low price.”

She also questions why no word of a required feasibility study has emerged, unlike the first go-round.

Dollar could not be reached for comment on the progress of any feasibility study.

East Cobb Cityhood, a backer of incorporation, has announced plans for an April 14 virtual town hall meeting. Registration is available on its website. The East Cobb Alliance plans to weigh in then, as well as providing a counterpoint through the web and social media.

Dollar said the cityhood push has nothing to do with the change in the makeup of the county commission that occurred with the November election.

“Across Cobb and indeed all parts of metro Atlanta, both Democrats and Republicans are seeing the advantages of incorporation and have been forming cities. If the cityhood referendum were to pass, it would be to the benefit of all people living here.”