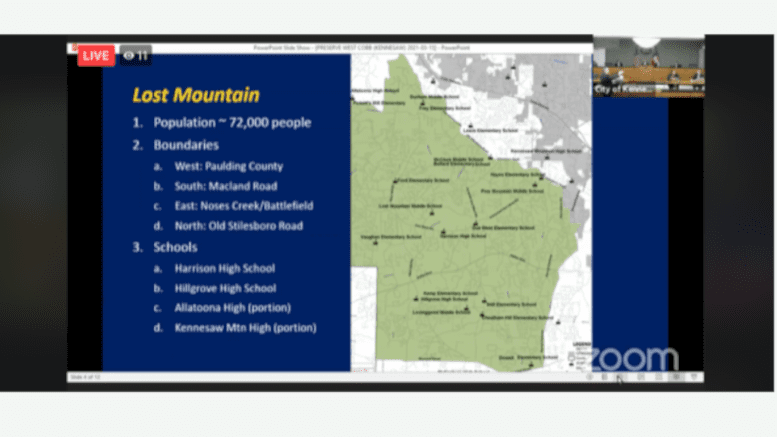 Rep. Ed Setzler discussed the proposed boundaries of the city of Lost Mountain during his presentation to the Kennesaw City Council.

Members of the Preserve West Cobb Citizens Alliance hope cityhood will prevent the overdevelopment they say is prevalent in other parts of Cobb County.

At the request of City Manager Jeff Drobney, Rep. Ed Setzler (R-Acworth) presented plans for the city of Lost Mountain to the Kennesaw City Council Monday since the proposed boundaries butt up against Kennesaw. Rep. Bert Reeves (R-Marietta) and Rep. Ginny Ehrhart (R-Powder Springs) are also part of the effort. Ehrhart is sponsoring the legislation for cityhood and plans to file by the end of March.

The Alliance held the first town hall March 11, stating on its Facebook page that more than 450 people registered to participate. The feasibility study, which will consider the financial ramifications of cityhood, is scheduled to take place between March and August, according to the timeline presented by Setzler. The public referendum will be on the ballot for residents within the boundaries of the proposed city in November 2022. If it passes, mayor and council elections will be held in March 2023 and the city will commence operations the following July.

The proposed boundaries of the city are Paulding County to the west, Macland Road to the south, Noses Creek/Kennesaw Mountain National Battlefield Park to the east and Old Stilesboro Road to the north. Harrison and Hill Grove High Schools are inside the boundaries, as are portions of the attendance zones for Allatoona and Kennesaw Mountain High Schools. The population of the area is about 70,000 to 72,000 people.

Rep. Ed Setzler discussed the proposed boundaries of the city of Lost Mountain during his presentation to the Kennesaw City Council.

“It’s a preservation focused city. Land use is very important to the people that are forming the preserve West Cobb movement…their vision is one of less density,” Setzler said.

Plans for Lost Mountain include planning and zoning services, code enforcement and trash collection. Consideration is also being given to creating a parks and recreation department and a municipal court.

“Georgia requires there to be three, at a minimum, services provided by a city to have a city, Setzler said. “They’re, candidly, quite happy with the services they are getting from Cobb police and Cobb fire.”

Activity centers in busy areas of Mars Hill, Due West, Lost Mountain and Macland Roads, along with Barrett Parkway and Dallas Highway would be targeted for commercial growth, while preserving residential areas.

According to Setzler, the semi-finalized map will be proposed within the next two weeks, but feedback over the course of the next year might mean neighborhoods are added or removed.