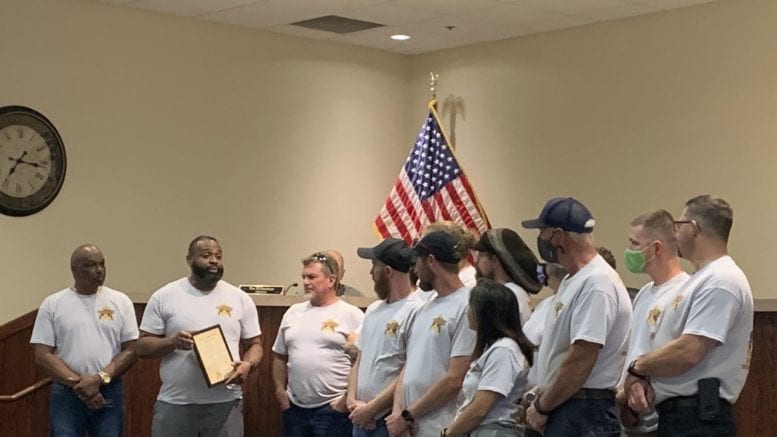 The first Thursday in May is the National Day of Prayer, an annual holiday that every United States president since Harry Truman has honored through signing a proclamation.

Although started by Christians, many people in the US of different religious backgrounds observe the National Day of Prayer.

At the meeting later in the day, Allegood presented the city’s proclamation to Pastor Todd Lollis of Freedom Church.

Allegood also discussed the efforts Lollis and his church have taken to help people affected by COVID-19.

“Todd partnered with the YMCA through Freedom Church and they put together the largest food drive and food delivery system probably in the entire state of Georgia,” Allegood said.

Allegood praised Lollis for his efforts to feed families in and around the Acworth community, saying that around 175,000 to 200,000 families have been positively impacted by the food drive and delivery efforts.

DIPG is a set of tumors that appear in the pons, which is part of the brainstem. The pons oversees crucial body functions such as breathing, blood pressure and heart rate.

The disease mainly affects 5 to 9 year old children, although it can also affect older children. Adults, for the most part, do not get DIPG.

The tumors grow by invading the normal tissue in the brain.

Because of the tumors’ location in the brainstem, removing them through surgery is not an option, as it could cause severe neurological problems.

Survival rates for DIPG are usually low — less than two percent of children diagnosed with DIPG live through it.

Since then, Russell along with her mother founded Warriors Against DIPG, a group dedicated to raising awareness about DIPG and finding a cure to the disease.

In the audience, public works employees and some city employees were wearing gray shirts to honor DIPG Awareness Day.

Lastly, Houston presented a proclamation to honor the week of May 16-22 as National Public Works Week.

The week is to honor the workers who build and manage infrastructure.

“[The board and mayor] further extend [their] appreciation to all public work professionals, managers and employees of the city of Acworth’s Public Works Department for their substantial contributions to protecting our city’s health, safety and quality of life,” Houston said.