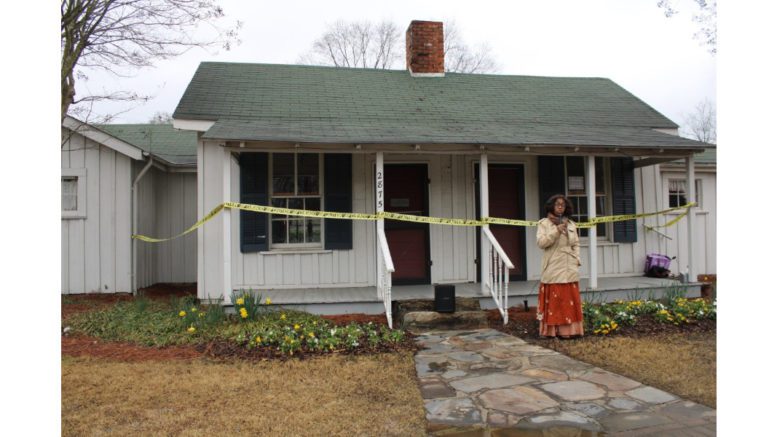 The Coalition to Save Aunt Fanny’s Cabin bore a slightly chilly and damp Sunday afternoon to host its second “circle of strength,” where those in support of keeping the cabin in its current location offered words in support of the cabin’s namesake — Fanny Williams.

“We’re sure some people were like, ‘oh, it’s going to rain, we’re not going to come out,’ but I said ‘rain, shine, snow, sleet, hail, we’re going to be here,’” former Smyrna City Councilwoman Maryline Blackburn said. “And we’re here and supporting Fanny Williams and this cabin.”

Blackburn has been at the forefront of the local group of Black and white citizens who continue to rally in an attempt to prevent the former restaurant from being torn down.

At Sunday’s event, people gathered in a semi-circle to “continue to pray and ask for this cabin to stay where it is,” Blackburn said.

The former councilwoman led the small crowd in singing what she said was Williams’ favorite song, a gospel one.

The circle was larger than the previous week’s, a fact Blackburn found encouraging.

In the past as well as Sunday, Blackburn and coalition members emphasized the historical value of the cabin.

“I’ll always say, you cannot tell [Williams’] story without talking about this cabin,” Blackburn said. “Because her story in history takes place in this cabin as well.”

The building began as a sharecropper’s home that dates back to the 1890s.

Martin described the relationship between Williams and Isoline Campbell McKenna — the restaurant’s founder and whose family employed Williams as a servant — as an early form of race reconciliation.

McKenna named the restaurant after Williams.

“It just goes to show you that reconciliation works,” Martin said.

In December, Smyrna’s City Council passed a resolution 4-2 to tear the cabin down unless someone decides to remove the building from city property. Since then, Mayor Derek Norton has been adamant that the focus is now on whether someone will take the building — not whether or not one is opposed to its demolition.

Norton said at a previous city council meeting that a task force will decide on how to properly memorialize Williams at the cabin’s current location. He said there will not simply be a plaque or statue there.

Still, this was unacceptable to Blackburn, who was also adamant that to properly memorialize Williams is to keep the cabin at its current location next to the Smyrna History Museum.

“Because of this cabin, Smyrna was put on the map,” Blackburn said. “People came from near and far to eat at Aunt Fanny’s Cabin. You have people like Doris Day, Liberace, Jimmy Carter … It’s just unfortunate that the negative side of the story — that had nothing to do with [Williams] — is what people are focusing on.”

In early February, the city council voted unanimously to extend the deadline for someone to make a proposal to move the dilapidated building to March 16 at 10 a.m.

The council will vote on it at the following regular meeting on March 21.

Coalition member Karen Shockley said that the group tried to make a proposal before the initial February deadline but the city rejected the proposal because it did not meet requirements.

“We had three options — keep [the cabin] there, let us scan it before you demolish it, or gives us the portions of it, anything that’s original, a piece of wood, whatever you can spare — give us something so that we can take it somewhere else and rebuild it,” Shockley said.

Shockley said the coalition will reconvene to decide on what other proposals they can make before the March 16 deadline.

In the meantime, the Coalition to Save Aunt Fanny’s Cabin has created a GoFundMe with a goal to raise $15,000. They aim to use funds to care for the cabin and help preserve it.

The Rev. Eldren Morrison of Shaw Temple AME led a prayer at the weekly event.

Morrison is also one of the members of the task force that will decide how to memorialize Williams.

Morrison said the first impression he got from the meeting was that people were interested in learning more about the history of the cabin and Williams.

It is not entirely clear yet what the monument will look like.

“I think the task force is trying to figure out what would be an adequate monument for her,” Morrison said. “I don’t know that folks will come back around to the realization that maybe this [cabin] is actually the best monument … I’m still kind of wondering if you’re not going to put like a stone marker or something, if you’re saying that’s not the kind of monument you want, what kind of monument do you really want?”

The circle of strength will continue every Sunday at the cabin from 3-4 p.m.

White Parents Rallied to Chase a Black Educator Out of Town. Then, They Followed Her to the Next One.