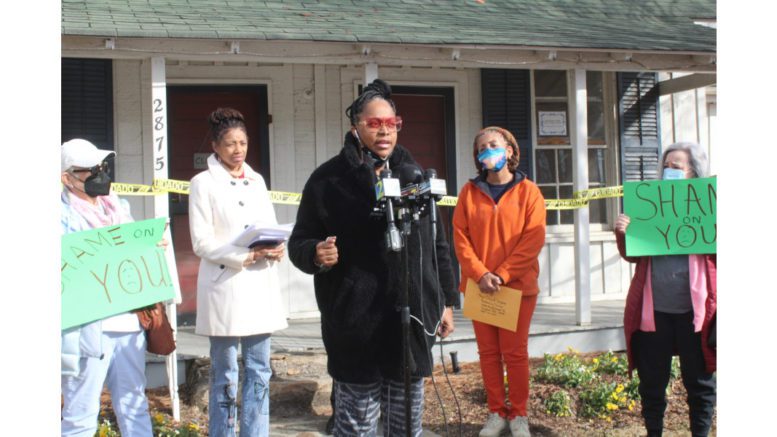 A group called the Coalition to Save Aunt Fanny’s Cabin along with the Cobb County NAACP held a press conference yesterday afternoon in front of the replica of the former Smyrna restaurant that had featured racist themes.

They oppose Smryna preparing to demolish the dilapidated building, which the city built as a replica with parts from the original building that closed in 1992.

It was built around 1997 and is located on Atlanta Road, near City Hall.

According to the Atlanta-Journal Constitution, Mayor Derek Norton created a task force back in August 2021 to figure out what to do with the building. Officials have said the building has structural problems.

The city once considered restoring the cabin, but some argued against using public funds to restore it, which is estimated to cost around $550,000, the AJC reported. Smyrna estimated that to remove the cabin and build a new one would cost approximately $400,000.

The Smyrna City Council voted 4-2 in a meeting late last month to accept the task force’s recommendation to demolish the building unless someone decides to buy the cabin and remove it from city property by February 1.

Councilmembers Susan Wilkinson and Charles Welch voted against it.

The city plans to use the fireplace and chimney from the cabin as part of a monument for the restaurant’s namesake, Fanny Williams.

A few city council members also voted to tear the building down because they objected to its racist history.

A city statement from December condemned the racist themes of the cabin and said they prefer to honor Williams in a proper manner rather than adhering to the “myth of ‘Aunt Fanny.’”

Supporters of the coalition to save the cabin, which includes Black members, emphasized that their focus was not on the restaurant itself, but the parts of Cobb County’s history the building represents.

“It’s really interesting that on today, the eve of … Black History Month, [that] tomorrow, February the 1st, there is a deadline which will decide the final fate of what we know as Aunt Fanny’s Cabin, named after Fanny Williams,” former Smyrna City Councilwoman Maryline Blackburn said.

Blackburn asked the mayor and council to preserve a part of the city and county’s history.

“It’s true that this sharecropper’s house-turned-restaurant has some negative tones to it as well,” Blackburn said. “But that’s life, and we continue to move forward and do those things which make our community much better.”

Blackburn said it was “unfortunate” that the city council only focused on the problematic history of the building.

“What our focus is today is we are set here to show the narrative of what Fanny Williams — her story — is for our community,” Blackburn said. “Her story is part of our history. The cabin, which was named after her, plays and is a big part in her history.”

“This is the last of the sharecropper’s cabins, and their stories are intertwined and inseparable,” Burns said. “Although this cabin has emerged during the era of Jim Crow, Fanny Williams’ contributions became the precursor of the Civil Rights Movement.”

Karen Shockley said that she is a new resident to Smryna and that her family has lived in Cobb for 35 years.

Shockley said she was disappointed the council made the decision so close to the holidays when constituents were too busy to debate over the future of the cabin.

“I’m insulted as a resident, I don’t feel welcome,” Shockley, who is Black, said. “I don’t appreciate the fact that they put yellow tape around the building.”

Shockley said that contrary to statements put out by city officials, the coalition was able to tour the building and said it was fine.

“We are proposing that [city council], at a minimum, postpone any decisions made until May so that they out of respect of Black History Month and Women’s History Month in March respect us enough to delay it,” Shockley said.

She also proposed scanning the building and rebuilding it somewhere else if the city does not want it on its property.

He echoed Shockley’s points about scanning and repurposing the building and said it means much to Smyrna’s Black community.

“It’s time for us to preserve it,” Morrison said. “It’s a shame we’ve allowed it to get to disrepair.”

“We want to know what the plans are [from the mayor and city council],” Cobb County NAACP President Jeriene Grimes said. “We want to at least have a voice in the plans. We want a collaborative conversation about the committee — or maybe even form a committee — to help restructure the building or to bring something forward.”

Blackburn said that Williams’ story cannot be fully told without the cabin. She questioned why the city spent $1.5 million to restore the historic Reed House but would not spend money to do the same for Aunt Fanny’s Cabin.

“For one person to say that every Black person in this community wants this demolished — that is a lie,” Blackburn said. “Because you don’t speak for me and many others.”

Asked if supporters felt at all consoled by the monument to Williams that is supposed to be built, Grimes said “We want to tell our story. We want our story to be told accurately, told right. We want to have input on what takes place here.”

Carolyn Sherman said she reached out to the National Trust for Historic Preservation and the African American Heritage Preservation Foundation and received no response from either.

Wilkinson was also present at the press conference. She said she wanted to come and listen to what citizens had to say.

“When it came forth, it was kind of pushed through on our agenda to vote on on the 21st,” Wikinson said. “I seconded the motion to table it … so that we could hear from the community more, not just the appointed task force, and the motion failed.”

“Then there was another motion on the table to remove the language of ‘demolition,’ and I seconded that motion as well and that motion failed,” she said. “I felt like we needed more input and more time to look at this.”

The councilwoman said she felt the February 1 deadline is too quick of a turnaround time.

She said she knows neither what the city would consider an acceptable proposal nor what it intends to do with the property if/when the cabin gets demolished.

After the conference, a few coalition members walked to City Hall to deliver an envelope they had with the written scanning proposal.

Aunt Fanny’s Cabin was a sharecropper’s home initially built in the 1890s. Richard Campbell, who at one point owned the South’s largest coal company, owned the property.

In the 1940s, Campbell’s daughter, the socialite and philanthropist Isoline Campbell McKenna founded the cabin as an antique store, according to tomitronics.com.

McKenna casually sold meals made by her family’s Black servant, Williams, according to the AJC.

When word spread about the delicious meals McKenna served, she eventually started what became the world-famous restaurant.

The history on tomitronics.com stated that McKenna eventually faced financial troubles, which led to her leasing and then selling the restaurant to Marjorie Bowman and Harvey Hester, the latter of whom managed another successful restaurant with racist themes in Atlanta.

Bowman and Hester sold the restaurant to George Poole, who ran it for 20 years beginning in 1968.

Young Black boys would dance in a minstrel-like fashion, sing songs like “Save Your Confederate Money, Boys, The South Shall Rise Again” and serve white patrons with wooden menu boards hanging around their necks.

Advertisements for slaves were reportedly hung on the walls.

Carter was said to be a big fan of the restaurant.

McKenna, who was white, named the restaurant after Williams.

Despite old myths existing of Williams being formerly enslaved, historical records show she was not.

The article on tomitronics.com states that Williams was reportedly in her 70s when McKenna opened the cabin and likely born after the Emancipation Proclamation.

The restaurant’s namesake also never actually lived in the cabin, according to McKenna’s son, William.

Williams was said to be active in helping her community. She was a civic worker and longstanding member of Wheat Street Baptist Church, a social justice oriented church.

The Ku Klux Klan reportedly once burned a cross to try and intimidate Williams for her actions, one of which included “being one of the major fundraisers for Marietta’s ‘Negro Hospital,’ which broke ground in 1947,” according to a Smyrna statement.

Williams is buried in an unmarked grave at the historically Black Southview Cemetery in southeast Atlanta, according to the article in tomitronics.com.

According to a Georgia Tech page, the cemetery used to host Dr. Martin Luther King, Jr., Coretta Scott King and Dr. Benjamin Mays before they were reinterred.

The cemetery is currently the gravesite of King’s other family members, Civil Rights icons Julian Bond and John Lewis, some Tuskegee Airmen, victims of the 1906 Atlanta massacre of Blacks and other racist attacks, and many ordinary and forgotten Black people who helped shape the history of the South.

Aunt Fanny’s Cabin: it is important to put a face with the name