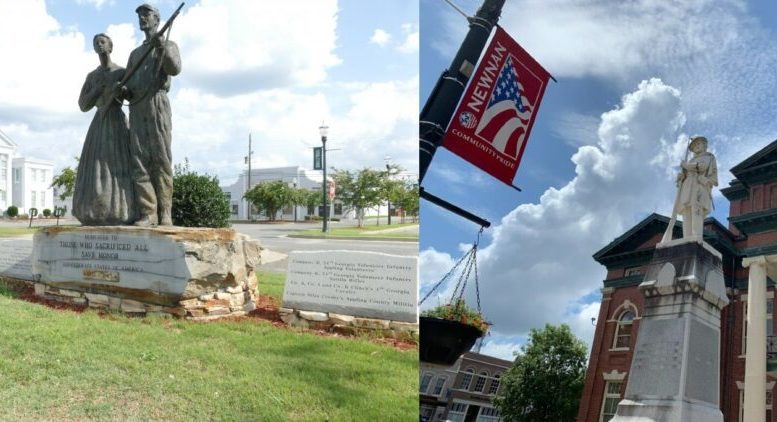 The Georgia Supreme Court has weighed in on lawsuits fighting local governments’ decision to remove Confederate monuments from public spaces, including in Henry and Newton counties. Across Georgia more than 60 statues and other memorials were erected in courthouse squares, including in Appling County, left, and Coweta County right. Georgia Recorder file photos

The Georgia Supreme Court just handed a mixed bag to supporters of keeping monuments commemorating the Confederacy on their historic courthouse lawn perches at public expense.

On Tuesday, the justices upheld a state Court of Appeals’ dismissal of lawsuits filed by Sons of Confederate Veterans against Newton and Henry county commissioners over their removal of Confederate monuments because the organizations lacked standing to sue the counties since they have not shown that its members live in those communities.

The state’s top court ruled, however, that Newton County resident T. Davis Humphries is legally entitled to sue her local government for voting in 2020 to remove a Confederate monument from Covington’s downtown square.

In Georgia, dozens of Confederate statues were erected in prominent places like courthouse squares during the Jim Crow era and have been considered symbols of white supremacy ‌‌and race. Georgia’s most famous Confederate memorial to the Lost Cause myth is the massive bas relief carving on Stone Mountain, where park board officials have considered scaling back some of the tributes.

The presiding justice wrote that the case has far-reaching implications, and plaintiffs must prove that their injury is resolvable through a court process.

“This case is about a highly controversial subject: whether local communities must continue displaying (and maintaining at public expense) monuments that celebrate the Confederacy and its long-dead supporters, despite those communities finding such celebration repugnant,” Presiding Justice Nels S.D. Peterson wrote in Tuesday’s opinion. “But nothing about those monuments is at issue in this appeal.”

Now, the case will return to the lower court to determine if Humphries can be awarded injunctive relief, which prevents or permits a party from acting in a certain way.

The Sons of Confederate Veterans chapter and Humphries filed separate complaints alleging that the county’s plan to expedite relocating the monument violated their rights and dignity. Humphries claims the Newton County commission’s decision violated a law that prohibits the removal and relocation of public monuments without protecting them.

The Newton County commissioners voted to remove the monument, but relocation has been postponed while court proceedings are ongoing. Meanwhile, Henry County officials argued that sovereign immunity prevented the county from being sued for damages and that the claim for injunctive relief was irrelevant since the statue of Confederate soldier Charles T. Zachry had been removed overnight in July 2020 from the downtown McDonough square.

As a result of the violence that erupted during a 2017 demonstration in Charlottesville, Virginia, state lawmakers worked to prevent the removal of Confederate memorials as protests demanding removal took off across the country.

Georgia Republican Gov. Brian Kemp signed legislation in 2019 that increased the penalties for vandalism and prohibited the removal of publicly owned monuments and memorials without placing them in similarly prominent locations.

Monkeypox cases are in sharp decline. Could the outbreak be over?