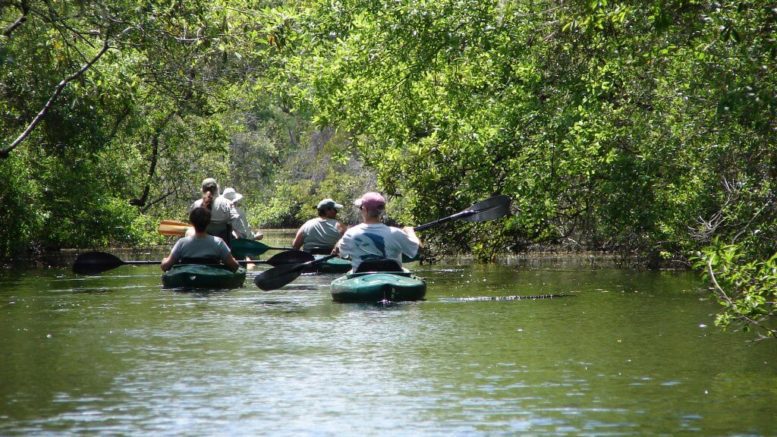 Each year, hundreds of thousands of people visit the Okefenokee National Wildlife Refuge in southeast Georgia to kayak, hike, fish, and participate in other recreational activities. A federal lawsuit filed on Nov. 15 by environmental groups claims that the U.S. Army Corps of Engineers is violating the Clean Water Act by not protecting wetlands that are at risk of mining. Photo contributed by Joy Campbell

Conservationists are waging another legal challenge against a company’s strip-mining plans near the Okefenokee National Wildlife Refuge in southeast Georgia.

The Southern Environmental Law Center is suing the U.S. Army Corps of Engineers for removing federal wetlands protections on 600 acres where Twin Pines Minerals is awaiting permission from Georgia’s Environmental Protection Division to begin mining heavy metals at the doorstep of the largest blackwater swamp in the nation.

The law center filed the suit on Nov. 15 in the U.S. District of Columbia District Court on behalf of the National Wildlife Refuge Association, National Parks Conservation Association, Defenders of Wildlife and the Center for Biological Diversity. The lawsuit challenges the Corps’ decision in August to return control of the project to the state Environmental Protection Division after the federal agency gave up on its plans to get more input about the mine’s potential harm to Muscogee Creek Nation burial grounds.

The environmental groups say they want to ensure that the proposed mine receives the federal, tribal, and public inspections required by law. Activists contend that the Corps should not be following a 2020 rule that greatly reduced protections for waterways.

“Not only are the at-risk wetlands valuable in their own right, but they are important to the health of the irreplaceable Okefenokee Swamp,” Huynh said. “To comply with the Clean Water Act, the Corps must require Twin Pines to obtain a federal permit and complete a full environmental review of the mining project.”

Twin Pines is seeking a state permit to show it can mine 582-acres along Trail Ridge, a hydrological divide between the Okefenokee and St. Marys River, without endangering one of the Southeast’s most diverse ecosystems. It has tried to avoid a full environmental review for a mine it first proposed in 2019.

Twin Pines declined to comment on the complaint and an EPD spokeswoman said Friday that the lawsuit won’t affect its review of the permit application.

The company has claimed that the operation will not lower Okefenokee Swamp’s water level since titanium and zirconium will be extracted in small sections, followed by restoring the soil to its current shape.

President Joe Biden’s administration has tasked the U.S. Environmental Protection Agency with crafting new regulations while lawsuits like the SELC’s contesting the Twin Pines mine will factor into how much government protection is offered to millions of acres of wetlands, streams and groundwater.

The longstanding legal battle over what is meant by “navigable waters” made its way to the country’s highest court, with the U.S. Supreme Court in October hearing arguments in the case of an Idahoan homeowner who needed an environmental permit to build a home near a lake. The justices will rule if a U.S. district court judge properly enforced the Clean Water Act when the judge last year reversed Trump’s rollback of water protections.

The lobbying group for the agriculture industry, the American Farm Bureau Federation, endorsed the 2020 revision of the law that it said was significantly less burdensome than the Obama-era regulations that meant ditches full of water were defined as wetlands.

Three years ago, Twin Pines unveiled its plans to mine on more than 2,000 acres with the potential to expand to 12,000 acres. The initial stage has since been downsized and the Charlton County Commission is backing the project anticipated to create several hundred jobs during the mining operation averaging $60,000 in salary and benefits for the economically depressed community.

A coalition of Okefenokee park supporters called on the public earlier this month to reach out to the state EDP about their concerns for a project that threatens a refuge that is home to threatened and endangered animals, 600 plant species and is a destination that draws upwards of 600,000 visitors a year.

Those opposed to the Twin Pines project reference reports from University of Georgia scientists that found that Trial Ridge acts as a natural dam and that mining will lower the water level in the swamp while making the area more susceptible to severe droughts.

“Mining should not be allowed in and around this wild place, which provides protections for thousands of species and recreational opportunities for birders, fishers, hikers, kayakers, photographers and more,” Watson said. “The Clean Water Act provides key safeguards for the Okefenokee, keeping the waters we drink, fish and swim clean for all. Why jeopardize that for a mining operation? We look forward to the court’s affirmations of these safeguards.”