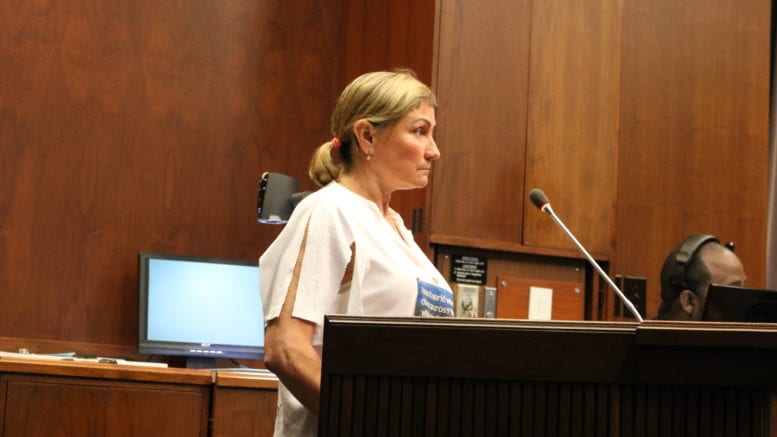 It was a bad day for pet chickens in the home of the Big Chicken.  The county commission voted 3-2 Tuesday to deny a zoning variance that would have allowed the son of a resident of the Highland Pointe community of East Cobb to keep his three pet chickens, named Ryaba, Grey, and Polka Dots.  Birrell, Weatherford, and Boyce were in the majority in denying the request, Ott and Cupid voted to allow the chickens to stay.

Natallia Vilchenko, who came to the United States from Belarus 14 years ago, presented the following slideshow in her attempt to be granted the variance for her son’s chickens (you can expand the slideshow to full screen with the arrow icon in the lower righthand side of the rectangle):

A group of Highland Pointe neighbors opposed to the variance testified before the commission, also. Lance Ruhl, who is opposed to allowing the chickens to stay, said,

I never expected this issue would raise such controversy in the neighborhood.  There has been a significant amount of chatter in social media and through email distribution both for and against the matter.  One online survey in the neighborhood captured over 100 responses, and the results ran two-thirds against and one-third for the application.  Much of the argument supporting the application centered on emotional appeals to keep chickens as pets, or ‘it’s my property, I can do what I want with my property’ type of thinking.  The fact of the matter is you can’t do whatever you want with your property. I can’t run a commercial business out of my home in a residentially zoned neighborhood.  I can’t park a bunch of dead cars, trailers, and debris in my yard, as it makes the yard look like a junkyard, an unsightly mess. The fact of the matter is we live in an area with residential zoning and HOA covenants controlling and restricting what takes place.  Everyone was aware of and agreed to these controls when they purchased their home. Controls were important to me when I looked for a home to purchase 25 years ago.  I purchased in an upscale swim/tennis community.  I have no interest in living next to a problem. Controls maintain a nice quality of life for all residents and protect our property values.

Camissa Thornton, another opponent of the variance, said

I live … directly across the street from Natallia … I would like to add that any noise that is generated on her property, circulates towards my property, and I can definitely say with certainty that her chickens can be heard from my property. You can’t say that the chickens don’t cause a nuisance, because they do. They can be heard, they attract wild animals.  I would like to say that when I originally looked for a home, I looked at Highland Pointe, I looked at a number of other subdivisions. The main reason that I chose to purchase my home in Highland Pointe was because of a strong HOA.  I wanted the same controls that Lance just spoke about when he purchased his home.  I believe in maintaining strong housing values, that is very important to me …  I made a list of items that I didn’t want to live by when I purchased my home.  Chickens weren’t there when I purchased my home, and I intend for them not to be there while I’m living there.

At first, there was confusion within the BOC about whether the vote by the commission was meaningful since the commissioners initially thought that Home Owners Association rules prohibiting chickens could be enforced no matter what the county code said.  But Paul Amoruso, the president of the HOA, said Highland Pointe’s rules defer to the county with respect to allowed or prohibited pets.  Tension erupted briefly when Birrell interrupted Cupid during the discussion, and Cupid said, “I’m telling you I prefer that you don’t interrupt me when I’m speaking.”
The question was called, and the variance was denied.  Vilchenko’s son has 45 days to relinquish Ryaba, Grey, and Polka Dots.
After the vote, Bob Windham, a neighbor of Vilchenko’s who came to support her variance, said,  “She’s from Belarus.  What they call the last dictatorship in Europe.” He said her treatment by the HOA and the Cobb BOC was similar. “We have all these Republicans.  What’s their main criteria?  Government staying out of people’s business … Ronald Reagan would be rolling over in his grave, hearing that this county board determined that [Velchenko could not keep the chickens.]”
Advertisement
Advertisement
SHARE
TWEET
PIN
SHARE