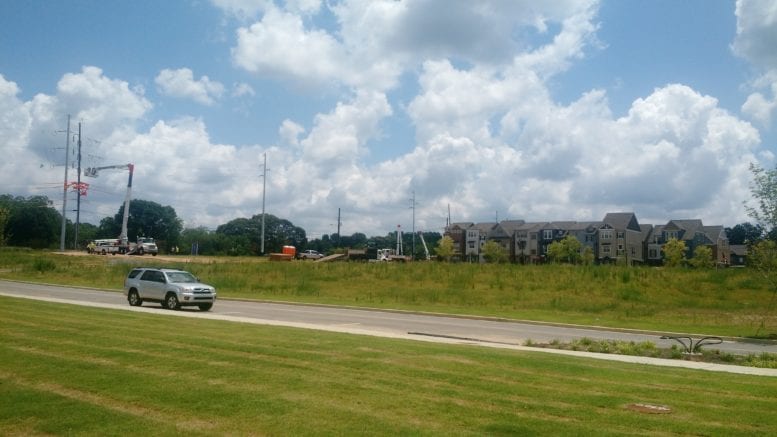 Site of the upcoming houses at Belmont -- photo by Haisten Willis

In a 4-2 vote, the Smyrna City Council approved a major change of plans to the Belmont mixed-use development located at the intersection of Atlanta Road and Windy Hill Road.

The project features a mix of elements including Smyrna Elementary School, a retail center known as Shops at Belmont, medical offices, apartments and single family homes. Original plans also called for a 164-unit seniors housing complex in the center of the development, but those plans were scrapped Monday night in favor of an additional 59 single family homes on 3.3 acres, or just under 18 homes per acre.

“This mixed-use development had to respond to the market and economic conditions that unfolded during this drastic time period that we endured,” said attorney Kevin Moore, who represented developer Halpern Enterprises at the meeting.

Moore pointed out that the original plans date back to 2009, saying changes in the economy necessitated the switch. He indicated the main factor was the high cost of a parking deck that would be included in the design, making the original plans too expensive.

“The comparison is not that on the one hand, we have an age-restricted senior apartment community versus what David Weekly Homes is proposing. That’s not the comparison,” Moore said. “We don’t have [the option of the seniors housing], we wish that we did, but despite all our efforts, the economies of scale did not work.”

The measure passed by the relatively narrow margin of 4-2, with council members Andrea Blustein and Susan Wilkinson voting against. Corky Welch was absent from the meeting.

Blustein, in particular, expressed her frustrations with the development, asking if the extra homes were really part of the plan all along.

“I’m really disappointed this is happening,” Bluestein said. “I really looked forward to having the seniors housing component, and you more or less implied that from the very beginning they knew that seniors housing was never going to work because of the lot size that they had to work with. Is that correct?”

“No,” Moore said. “They had every intention [to build the seniors housing], and wanted to because it would have been more profitable and valuable.”

Teri Anulewicz, who voted in favor of the change, also said she was disappointed and “not in love” with the additional houses, but added that she understands the market forces behind the alteration and didn’t see a reason not to approve it. No one signed up for public comment on the issue.

The houses will utilize the same homeowners’ association as a set of completed houses located next door.

Belmont is a redevelopment of the former Belmont Hills shopping center, at one time one of the largest retail destinations in all of metro Atlanta. The developer, Halpern Enterprises, is also behind the Jonquil Village project located further south on Atlanta Road.