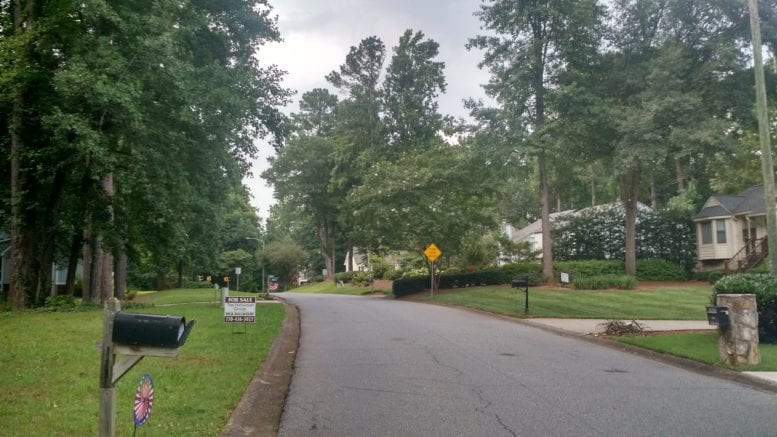 Sidewalks can become a surprisingly controversial addition to an existing streetscape. While most agree on their usefulness to separate pedestrians from car and bike traffic, especially on highly trafficked corridors, adding them to an existing residential street means cutting into the yards of local homeowners.

The issue arises though, in deciding where it’s appropriate to put them.

That issue arose during an otherwise quiet Smyrna city council meeting July 5. Held on the heels of Independence Day, the meeting lasted less than 20 minutes and two council members plus the city administrator were out on vacation.

But during public comment, local resident Maria Ehme spoke out against the idea of sidewalks being added to her side of the street on Vinings North Trail, in a neighborhood just south of Atlanta Road.

“I thought only a few of us didn’t want the sidewalks. I was wrong,” Ehme said. “There are 27 families involved. I’ve contacted 21, and of those, 18 signed petitions saying they didn’t want sidewalks on their property. Some I talked to on the other side of the road said they’re fine with it as long as the sidewalks aren’t in their yard.”

“I had heard there was some concern about the sidewalks,” said Bacon. “The first thing I said was, ‘it’s because it’ll be in someone’s front yard.’ That’s generally what the biggest issue is, what side of the road it’ll be one. They want sidewalks but don’t want them in their front yard. I’m sure there’s a lot of neighborhoods where we could reallocate those funds.”

Sidewalks are a frequent topic of debate in Cobb County, though not always because of opposition.

For example, during a town hall meeting held late last year by Commissioner Lisa Cupid, a resident talked about the need for sidewalks on Mableton Parkway for safety reasons.

“I live off Mableton Parkway,” said a resident during the meeting. “People talk about how much the sidewalks and the street lights cost. But nobody talks about the number of people that have been killed on Mableton Parkway because they can’t walk along the roads, because people are going too fast. The kids have to catch the buses in the wintertime, in the dark.”

Cupid responded that citizens should go to county commission meetings to apply pressure to the county to get the things they need to make the county safe. She also told the crowd there was $22 million set aside for sidewalks in her district.

“It seems like such a minor thing to put in sidewalks, but they are not inexpensive,” Cupid said. “And they take a lot of time to get underway.”

Cobb County DOT Planning Division Manager Eric Meyer said the 2016 SPLOST includes $15 million county-wide for new sidewalks (though the DOT’s jurisdiction does not include Smyrna or other Cobb cities), plus additional funds just for Cupid’s District 4.

Newer neighborhoods almost always include sidewalks because they’re now required by code. But when the older neighborhoods in Smyrna and South Cobb were developed, sidewalks weren’t a requirement and developers often skipped them.

“That part of the county is playing catch-up,” Meyer said.

According to Meyer, sidewalks can cost between $200,000 and $300,000 per square mile if curb and gutter is already installed, or up to $1 million per mile if paired with a drainage system.

He added that he gets requests for sidewalks far more often than complaints, with over 1,200 requests coming just in the last six years.

“We have more requests than we have money to install them,” he said. “Sidewalks are immensely popular.”

In the case of Vinings North Trail, the issue will be solved via a vote of the full neighborhood, according to Doug Stoner, who represents the area on the Smyrna City Council.

Stoner pointed out that the city owns a 12-foot public right of way behind the curb in the neighborhood and in many neighborhoods in the city, so Smyrna is not taking anyone property away in order to install sidewalks. That said, if the neighborhood votes ‘no,’ the funds will go elsewhere.

“Every neighborhood is a little different,” he said. “It depends on how much right of way the city has. We will not use eminent domain for just a sidewalk.”

Stoner described new sidewalks as a case by case situation, where some residents are enthusiastically for or against the idea of adding them.

“It just varies with the neighborhood,” he said.

Survey about Services for Seniors in Cobb County

Downed trees in Cobb County in aftermath of windy weather