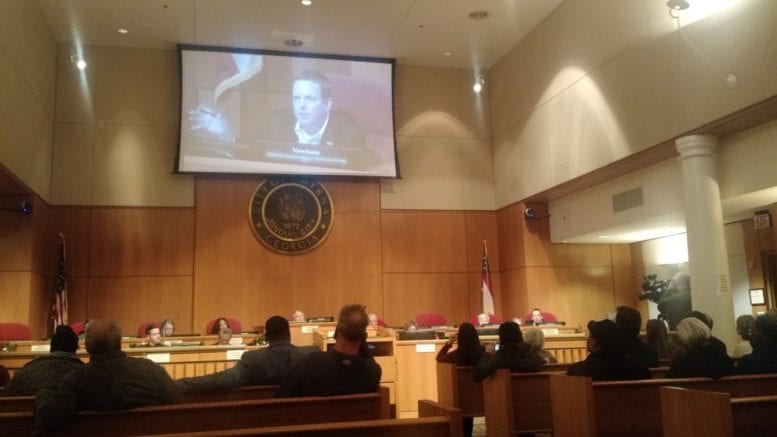 The new policy, set to go into effect April 2, carries a maximum fine of $150 for drivers in city limits caught using a cell phone or other mobile device with their hands.

“This is just a change in our habits, of what we do. It terrifies me sometimes to see folks on their phones or using handheld devices,” said Bacon as he cast the deciding vote. Smyrna’s mayor does not vote during council meetings unless there is a tie. “This is just a step in the right direction, so I’m going to vote yes. I have no reservations.”

Council member Derek Norton sponsored the ordinance and was joined in voting in favor of it by Corky Welch and Doug Stoner. Susan Wilkinson, Andrea Blustein and Maryline Blackburn voted against it, and Ron Fennel abstained because of his involvement with an advocacy group that he said backs similar measures.

“One community can’t solve this,” said Bluestein ahead of her ‘no’ vote.” We need to put pressure on the state to do its job.”

Bacon added that he did not wish to cast the deciding vote, and said he felt Fennel should have voted before stepping in to pass the measure.

The hands-free ordinance initially would have gone into effect in January, but was pushed back to April in case the Georgia General Assembly steps in with a statewide law this spring. Norton expressed doubt that will happen, especially because the legislature tends to be less active during election years.

Smyrna officers will hand out only warnings for the first 45 days, and citations will not add points on a driver’s license.

Georgia already has a law against texting and driving, but law enforcement says it is all but impossible to enforce.

Another change from the original language is the addition of a “one-touch rule” allowing drivers to touch their phone in order to answer a phone call. The full text of the ordinance can be found at this link.

There were 10 speakers on hand to make their case for or against the measure, many making passionate statements about lives affected by distracted drivers.

Kathy and Craig Clark spoke to the council for a second time on the issue, citing their daughter’s death due to a distracted driver as a reason to pass the measure.

“Smyrna can lead the way and set the example for the state,” Craig Clark said. His wife added, “nobody wants to get that call that your child isn’t going to be there.”

Other speakers in favor of the ordinance included an Atlanta traffic engineer and Smyrna police chief David Lee.

One speaker pleaded with the city to put out a thorough education for citizens before it goes into effect. Another cited a Stanford University study that found hands-free driving is no more safe than talking on a cell phone while a driver holds a phone in their hand.

Norton and others assured that hands-free driving does save lives, and he added that the maximum $150 fine will not bring in significant new revenue for the city.

“This is not a gotcha moment, or a revenue generator,” he said.