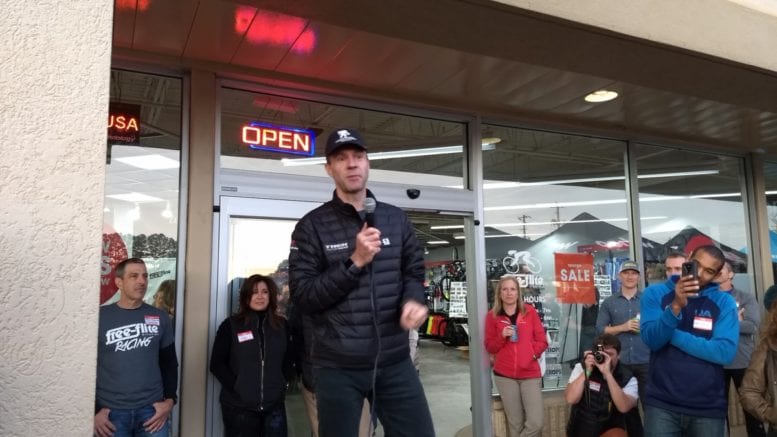 The parking lot at Free-Flite Bicycles would normally be empty on any Sunday evening, especially on an unseasonably cold one in April.

Not the case last Sunday night. The lot, store and sidewalk swelled with more than 100 cyclists and cycling fans who gathered to celebrate the bike shop’s 40th anniversary in Cobb County.

“We’ve been doing this a long time,” said company co-founder Dan Thornton to a crowd gathered outside the storefront. “Someone came up to me earlier who still owned a bike they’d bought from us 30 years ago.” 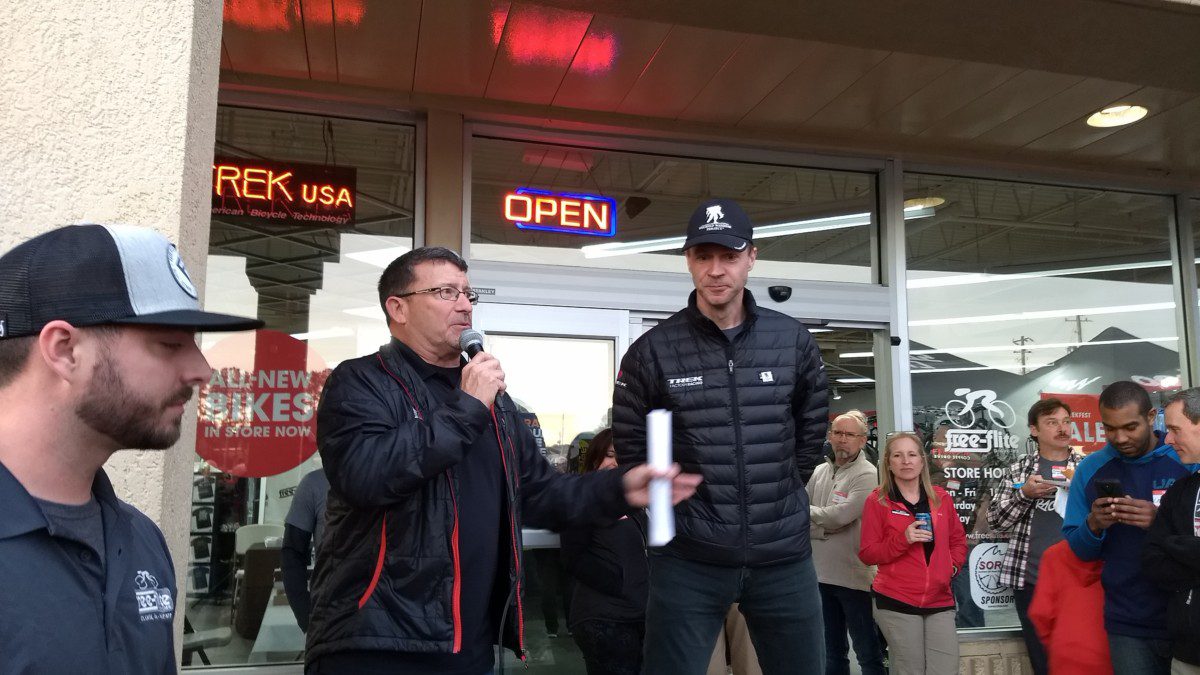 Thornton was a teenager when he opened the shop with his late father, Jeff. To Thornton’s right stood his son, Free-Flite Bicycles general manager Daniel Thornton. To his left was multiple time Tour de France stage winner Jens Voigt, who signed autographs and regaled the audience with tales of his cycling days.

Free-Flite Bicycles fans had other reasons to show up as well. The Thorntons provided free pizza and up to three free beers per attendee, not to mention the chance to land an autographed Voigt poster.

Voigt, now 46 and retired, was the main draw of the evening aside from the pizza and beer. He told plenty of jokes, and recalled his earliest days as a cyclist with a notable German accent. Born in 1971, he spent his childhood in East Germany before the fall of the Soviet Union and was taught as a child that the Berlin Wall served as protection from the West.

“The Iron Curtain was to protect all of us from you,” said Voigt, who is married with six children, recalling what he’d been told in school.

Voigt grew up in what he describes as a working-class family. His parents didn’t own a car until he was 15 years old. Voigt was able to land a bicycle at a young age, however, which left quite an impression.

“That bike was the first item in our house that belonged only to me,” said Voigt, now a Berlin resident.

He later took a series of questions from the audience, including what was his worst crash (a downhill fall at the 2009 Tour de France), who was his toughest competitor (Sylvain Chavanel), the best places in the world to ride a bike (South Africa and Lake Tahoe) and whether any of his children will become professional cyclists (he doesn’t think so).

Once the question and answer session was over, Voigt headed inside to sign autographs for a long line of fans, while others headed over to get more free pizza and beer, and the Thorntons began the countdown to Free-Flite Bicycle’s 50th anniversary celebration in 2028.