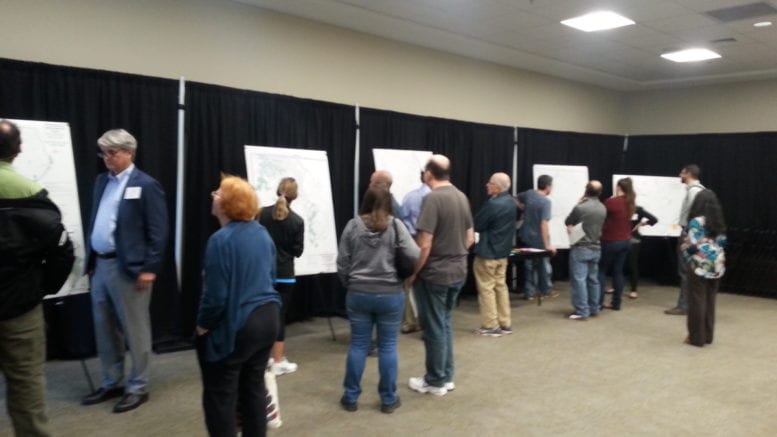 The draft of Cobb County’s Greenways and Trails Master Plan was displayed in an open house at the Cobb Civic Center Tuesday evening. Consultants from the engineering firm Gresham Smith and Partners, along with Eric Meyer of the Cobb County Department of Transportation, were on hand to answer questions about the plan.  Maps were lined against the walls of the room.

The draft plan, initiated by the Cobb DOT has been under development since the spring of last year.  Input from citizens was collected at a number of local events and locations across the county in 2017.

Eric Meyer, the planning division manager at the Cobb DOT, told the Courier, “The plan shows additional hundreds of miles of new proposed trails, but we do have as you see on those boards over there, a series of priority trails.  So we’re going to see how folks react to the overall network, then see how folks react to the priority trails, and then see how our Board of Commissioners react to them.  We’re finally at the point in our county where we’re able to connect all six of our cities, from the lake, to the mountain, to the river.”

The greenways and trails in the plan will eventually connect the entire county, and also link with similar trails within Cobb’s six incorporated cities.

Eight projects are classified as priorities in the list:

The Chattahoochee River Trail follows a path along the river from Mableton Parkway northward to I-285.  On the south, it will connect with the already programmed Mableton Parkway Trail, with the potential of connecting with the Floyd Road Trail and the Silver Comet Trail.  To the north, the trail will pass the Riverview Landing mixed-use development, and is projected to cross the river and connect with the Proctor Creek Greenway in the City of Atlanta. A notable thing is that this trail will provide access to the river south of I-285, which has been largely inaccessible to the public.  It will also provide access to the future park near Discovery Boulevard.

The proposed Silver Comet Connector Trail has become well-known through the efforts of the organization Connect the Comet. When completed this trail would run from the eastern endpoint of the Silver Comet Trail near the East West Connector, to the Chattahoochee River.  The plan of Connect the Comet is to eventually connect with the Atlanta Beltline and the trail networks that feed into it.

The first phase of the  Rottenwood Creek Trail is 3.3 mile long, and will connect Alumni Drive with Franklin Gateway.  The City of Marietta has already put a great deal of work into the planning and implementation of the trail, and when the Rottenwood Creek Trail is completed it is expected to connect Kennesaw State University, Life University, and the Franklin Gateway Sports Complex.  It could also connect with trails running to Kennesaw Mountain, Town Center, and the Bob Callan Trail in the Cumberland area.

The Allatoona Creek Greenway is part of a longer proposed trail from Dallas Hwy to Lake Acworth along Allatoona Creek and Mars Hill Rd. It would run from Harrison High School to Allatoona Creek Park (which has an additional 25 miles of hiking and mountain biking trails). Also, a proposed spur trail would provide access to the West Cobb Regional Library, a YMCA, and a Kroger. This trail has the support of a number of West Cobb community organizations.

This project is a proposed extension to the existing Noonday Creek Trail.  It would run from the Bells Ferry trailhead to Noonday Creek Park near the Cherokee County line.  The future plan is to connect it with its counterpart trail in Cherokee County.  The existing trail is already extremely popular, with an estimated 200,000 visitors per year.  The Atlanta Regional Commission considers it a regionally significant trail.

The proposed Nickajack Creek Greenway has a long history.  It was in Cobb County’s 1998 Comprehensive Plan.  It would run three miles, from Buckner Road near the Lindley 6th Grade Academy, to the Chattahoochee River.  Much of it would be on land already owned by the county.  The county owns large blocks of land near the end of the trail near the river, and one potential trailhead is the future park adjacent to the river, near Discovery Boulevard.  This would also connect the trail to several other planned greenways that converge near the river.

The Hyde Farm – Johnson Ferry Trail would be 3.5 miles long, and make use of existing networks of trails.  It would provide additional connectivity between communities in East Cobb and the Chattahoochee River National Recreation Area.  It would run from Lower Roswell Road to Johnson Ferry Road.  The development of this trail will require coordination with a number of entities including the county, the CRNRA, Georgia Power, Cobb DOT, and Cobb P.A.R.K.S.

These are only the eight priority projects.  The entire plan includes much more, and you can read about it, and view all the maps, at http://cobbtrailplan.com.

Comments on the DRAFT Greenways & Trails Master Plan may be submitted via email to info@CobbTrailPlan.com through April 16, 2018, or in the comments section at the bottom of the Greenways and Trails Plan website.